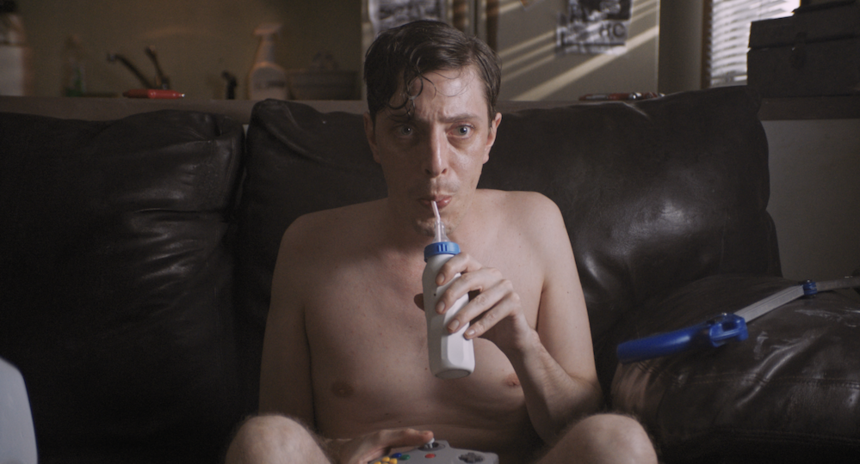 I've been playing a lot of Red Dead Redemption 2 lately. A LOT. I make sure I get my work done, but at a certain hour, this wild west video game calls to me, and my cat snuggles on my lap while I immerse myself to the point of not even turning my head when my boyfriend comes home. So I understand what writer/director Joel Potrykus means when he says of his new film, "All I’ve ever dreamed about is living on a couch, playing video games with no one bugging me. Relaxer is the nightmare version of my fantasy."

Doom and gloom are on the way. The Y2K apocalypse can't be stopped. Abbie's older brother issues him the ultimate challenge before it goes down: beat the infamous level 256 in Pac-Man and no getting up from the couch until he does so. Abbie’s survival story begins here; inside a rotting living room with no food or water, and a revolving door of numb-nut friends and acquaintances. It’s The Exterminating Angel by way of Slacker.

I had the disturbing pleasure of seeing the film at Fantasia last year, and agree with our critic Rodney Perkins in his review, that Relaxer "pushes its premise to the limit and dares the audience to stay onboard. Those who stick with the film will be rewarded with an uncomfortably hilarious ride."

The film will be released in cinemas in the USA on March 22nd. In the meantime, check out the trailer below.