BODY AT BRIGHTON ROCK Trailer Teases Menace in the Woods 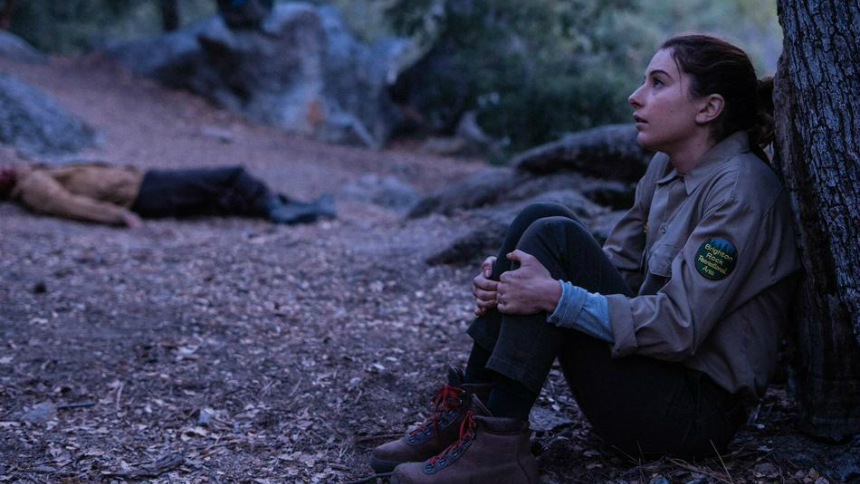 As a veteran part-time seasonal worker myself, I instantly empathized with Wendy (Karina Fontes) in the new trailer for Body at Brighton Rock, written and directed by Roxanne Benjamin.

Working at a state park in a mountainous American region, Wendy must take on what's described as a "rough trail assignment at the end of the season." So, a lonely trail, no doubt, and also one that is not familiar to her. Also, it could be fraught with unknown dangers, like wild animals, hungry for new blood.

Or, she might stumble upon ... well, let me allow the full, official description to narrate:

"Wendy, a part-time summer employee at a mountainous state park, takes on a rough trail assignment at the end of the season, trying to prove to her friends that she's capable enough to do the job. When she takes a wrong turn and ends up deep in the backcountry, she stumbles upon what might be a potential crime scene.

"Stuck with no communication after losing her radio and with orders to guard the site, Wendy must fight the urge to run and do the harder job of staying put -- spending the night deep in the wilderness, facing down her worst fears and proving to everyone - including herself - that she's made of stronger stuff than they think she is."

Director Roxanne Benjamin already has impressive credits, demonstrating a sure hand at developing tension in her short films in Southbound and XX. Now I'm eager to see what she has in store in her full feature debut. The film recently played at SXSW and is cued up to screen next at What the Fest!? in New York City, where it will play on Saturday, March 23. (More info here.)

Check out the trailer below. Magnolia Pictures will release Body at Brighton Rock in theaters and On Demand on April 26, 2019.

Do you feel this content is inappropriate or infringes upon your rights? Click here to report it, or see our DMCA policy.
Casey AdamsEmily AlthausJohn GetzKarina FontesMartin SpanjersMiranda BaileyRoxanne Benjamin

More about Body at Brighton Rock