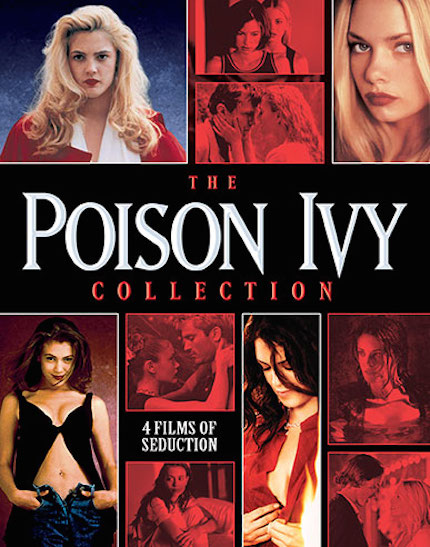 The Poison Ivy films have left me a lot to try to wrap my head around. Here's the short description of the collection from Scream Factory's website:

Tempestuous young Ivy (Drew Barrymore) befriends introverted teen Sylvie (Sara Gilbert) and seduces her way into the lives of Sylvie's wealthy family in Poison Ivy. In the piquant follow-up, Poison Ivy 2: Lily, a sheltered art student (Alyssa Milano) finds Ivy's diaries and, after reading them, is lured into uninhibited risk-taking to become a wild woman! Then Ivy's sister (Jaime Pressly) visits the Greer residence in Poison Ivy: The New Seduction, and it doesn't take long for her to use her skills of manipulation to throw the household into a slate of panic and deceit. A college freshman (Miriam McDonald) is invited to join an exclusive campus sisterhood, where cold blooded ambition causes the group to seduce, blackmail or do away with anyone that gets in their way in Poison Ivy: The Secret Society.

Yeah...So it's been quite awhile since I've seen the first two Poison Ivy films, and I'll date myself, but whatever. I rented them on VHS back in the '90s when they were both freshly released on home video, back when you had to physically pick up and return video tapes at the local Mom-and-Pop shop or Blockbuster. Friday and Saturday nights were lit at the video store, filled with people searching for something fun, weird, or thrilling to bring home, and all of us were trying to beat each other to get that physical copy of whatever we were hunting before someone else did. Magical, fun, and frustrating days.

The early and mid-1990s were a prime market for the psycho-sexual thriller. I'm not sure why that is, but films like Basic Instinct, Sliver, Body of Evidence, and The Last Seduction were everywhere. It was a weird time. Enter the Poison Ivy films. They all generally look and sound good on this release, by the way, except for those standard definition inserts.

Starting with the 1992 Drew Barrymore and Sara Gilbert thriller, Poison Ivy, the original. When I first watched fellow teen Barrymore (though a few years' my senior) as Ivy navigate a fancy prep school she got into on scholarship, I loved how rebellious that character was. She'd come from nothing, but never cared what anyone else thought. That feeling easily turned into, "oh wow, she's probably crazy" into "yep, crazy, and this isn't going to end well" as the character turned from seduction to flat-out murder. I couldn't help but feel that the plot was very much classist in that the impoverished Ivy was everything terrible underneath her exterior, a criminal just waiting to be unleashed.

Yeah, subtle isn't a word you can use to describe these films. In the sequel, Poison Ivy 2: Lily, a young Alyssa Milano is off to take art classes at a Los Angeles school. Fresh in from the midwest, she's wide eyed and meets other artsy, mostly awkward kids and young adults. This time, she somehow finds Ivy's diary and some personal effects, even though there's no basis in logic for that journal to be in a dorm. Anyway, Lily decides that she wants to try being a bad girl even though she's clearly the opposite type of person. She begins posing naked for her art professor, who eventually snaps and goes full psycho, even though he's got a kid and a clearly long-suffering wife, who deserves so much more than this pathetic loser who sleeps with his students.

The third film, Poison Ivy: The New Seduction, introduces Jaime Pressly as another young co-ed femme fatale. She's pretty good here as Ivy's surviving sister. The backstory is that as girls, their housekeeper mom often brought them to the house of the rich family she worked for --- while screwing the husband on the side, of course. They get found out and kicked out, but in "current day," Pressly's character has kept in touch with the family's daughter, and somehow they're remained best friends/pen pals and she gets to stay at the house. Naturally, she goes on a seduction and murder spree, because of course she does. It's... interesting.

The last film, Poison Ivy: The Secret Society is filmed both like a '90s straight-to-home-video project with some soft core moments, along with jealousy and murder. There's plenty of conniving behavior from spoiled rich secret society sorority girls along the way. Everything here is a total trope.

The cool thing about this release is that each film is either unrated or has the unrated inserts put back into the individual film, should you choose that version. (There's also R-rated cuts of the first three films.) The bad thing about this collection is that the unrated inserts --- particularly of the first two films --- is that depending on who you are, you might feel really, REALLY icky about watching a teen girl get so intimate (and I'm being diplomatic in word choice here) with a middle-aged man at least old enough to have fathered her. It's doubtful that those inserts would never be filmed today, or these films might not even have gotten made.

Watching the whole collection, it's interesting to see how the risque-ness of the films ebbed and flowed. What you'll see is essentially soft core stuff, so if you're somehow not prepared for that going into it, you should be now.

To watch the trailer and find out more, go to Scream Factory's page here.