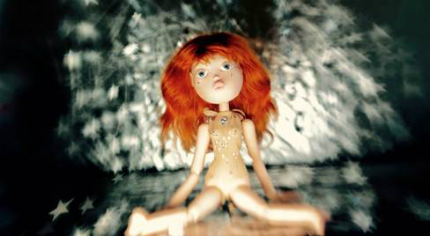 The full title is intimidating to behold -- Dollhouse: The Eradication of Female Subjectivity From American Popular Culture -- but the film itself appears to be a tour de force of puppet animation and looks quite inviting.

Nicole Brending wrote, directed, produced, and "stars" in Dollhouse, which will debut later this week at the Slamdance Film Festival. Here is the official synopsis:

"Fictional child pop star Junie Spoons just can't get a break (and can't even tell her own story) in this wild, demented romp into the psychology behind misogyny - the missing female subjective perspective.

"A puppet animation told a la VH1's Behind the Music, Dollhouse: The Eradication of Female Subjectivity from American Popular Culture charts the rise and fall of Junie's career as her life is splashed all over the media and recounted by those who claim to know her - a greedy record producer, a narcissistic mother, an opportunistic friend, ex-boyfriends and the like - until she is inevitably eliminated from her own story.

"The debut feature film of writer/director Nicole Brending blatantly ignores political correctness in a bold, no-hands-barred look at the insidious mechanisms governing misogyny in America. With hand-made puppets and original pop songs, Dollhouse will have you (guiltily) singing along to Junie's tragically true tale."

Dollhouse will enjoy its world premiere at Slamdance; more information here at the official festival site.

Do you feel this content is inappropriate or infringes upon your rights? Click here to report it, or see our DMCA policy.
Adam SlyAneikit BonnelErik HooverNicole BrendingPeter OoleySlamdance 2019Sydney Bonar