Review: IO, A Philosophy of Existence and Connection 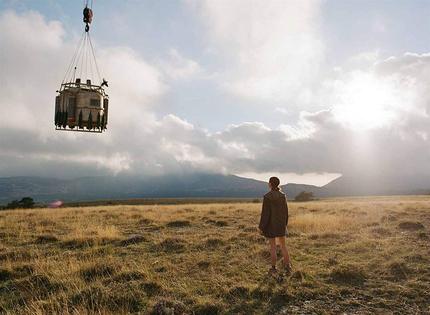 It is not easy to know when to have the courage to change something, and when to have the wisdom to accept what can’t be changed. Or even if something can be changed, when it might be too late to make a difference. Do we accept that even our best will not be enough, and move on, or do we keep trying even if such efforts are futile and might end in our death? And what would it matter if it leaves us bereft and alone, if the point of human life is what we find in each other?

Sam (Margaret Qualley) is a scientist, and one of the last humans left on a dying Earth. Everyone else has left for IO, one of Jupiter’s moons, in search of a habitable planet. She has lived in near isolation, it seems, for years, previously with her now-deceased father (Danny Huston) and now alone, testing the water and air for inevitable contamenents, keeping bees that could survive the pollution and re-pollinate, and holding out some ridiculous hope that, even if the Earth could be saved, it would be saved in time.

She communicates with her love Elon, already safe on Io, who encourages her to join him before time runs out. But Sam keeps trying, determined to carry on her father’s legacy and save the planet.  But almost as soon as a huge storm destroy her beloved beehives (the cornerstone of her continual studies), Micah (Anthony Mackie) arrives via hot air balloon, to take her to the final launch, before she is left alone forever.

Director Jonathan Helpert, working from a script by Clay Jeter, Will Basanta, and Charles Spano (who wrote Embers) craft an eerie and minimalist story, one that looks as much to the myths and stories as to what the future holds and how we should approach it, as oppose to just the factual information. It is enough to know that the world is dying because of pollution and human destruction of the planet, and that the pull between the desire to save it and the likely impossibility of halting the planet’s death means there is only so much time to make a final decision of existence or lonely death.

All that is left is for Micah and Sam to discuss the philosophical nature of existence. Is our existence tied to a particular geographical area (be it large or small), or is about about our connections to other people, or even just to one person? Micah discusses Plato’s theory that we are all half, split from the person to whom we must be joined (whether it be friend, lover, parent, or child), while Sam’s decision to leave seems one encouraged not by her own desire, but by her obligation to her father and to Elon.

What is the price of hope? Or love? Out of hope, Micah opts for leaving Earth, not necessarily to start a new life, but to forget the old one. Sam is nothing but hope, even if that hope is misplaced, even as one small scrap of the earth is still alive, even if it is not, nor will never be, enough. Qualley and Mackie both intuatively move through the story and the space with both flow and hesitation, aware that the stakes their characters face are lfie and death, and the limits of their control over either, while still searching for that connection which is the difference between the bread and the rose.

This is not to say there is no action or tension in the film; on the contrary, as that clock runs out, tension is thick, wondering if the pair will make it to the final launch in time, so much so that you might be tempted to scream at the screen that they move faster. That tension and fear is more palpable precisely because it comes so suddenly after deep conversation and contemplation and is all the more frightening.

A film that is both immediately relevant in its imagining of Earth’s future, and asking those questions we have asked since we sat around campfires in nothing but animals skins, Io is that rare science fiction film that asks us to look beyond aliens, spaceships, and technology, to ask what of the future for humans as individuals and community in how we connect and how we live beyond mere survival.

IO is available to stream on Netflix.

Do you feel this content is inappropriate or infringes upon your rights? Click here to report it, or see our DMCA policy.
Anthony MackieDanny HustonIOJonathan HelpertMargaret Qualley