REVIEW: Don't Come Back from the Moon tellingly delves into the fragile psyche of fatherless youths left in abandonment 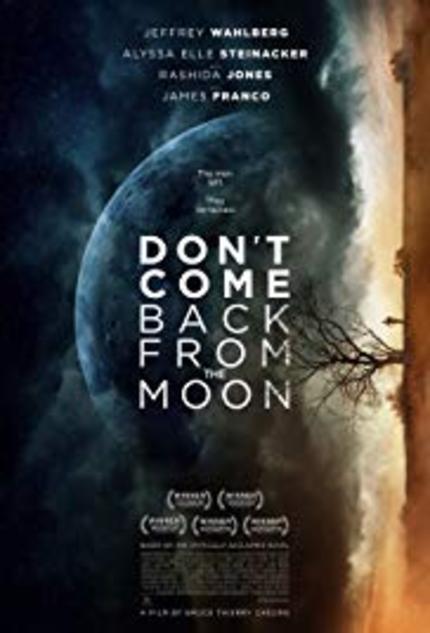 Co-writer/director Bruce Thierry Cheung's absorbing, sleepy-eyed fatherless fable Don't Come Back from the Moon is a small-sized affecting coming-of-age tale with a big scale heart and thought-provoking conviction. Cheung's desertion drama spotlighting the plight of a dusty town's epidemic of disappearing fathers and husbands has its low-key vibes of angst and contemplation that skillfully resonates on the untouched soul. The quiet destitution of lost youngsters (and struggling wives) needing their breadwinners at bay makes for a resounding psychological character study of domesticated despair.

Recent films such as last year's poignant Wildlife depicting fatherly absence resulting in tranquil turmoil certainly applies to Cheung's slow-burning narrative that convincingly exposes the emotional and psychological wounds of young folks aimlessly searching for usefulness in the selective barren region of Southern California. The atmospheric surroundings of draggy desert days set in the middle of a dustbowl town envokes stillborn senselessness and anxiety experienced by the numerous vulnerable familiy units in Moon. The film's underlying appeal is its sensitive and artful presentation carried on the solid shoulders of its mostly cast of unknowns that muster up decent performances in a revealing exposition of longing.

The film adaptation is based upon Dean Bakopoulos's 2005 novel Please Don't Come Back from the Moon. The premise involves the permanent closing of the local factory that causes the town's men to disappear. This desperate gesture puts an automatic strain on the countless kids, wives, and girlfriends that they have left behind to fend for themselves. Strangely, the loved ones have no inkling as to where their head of household have vanished. The disillusioned children, in particular, are forced to fantasize about where their no-show daddies have gone. This creates the playful illusion that perhaps their fathers had visited "the moon" within the curious minds of the children. Indeed, it is an acceptable and convenient belief for the junior crowd to invest in such a silly notion that their blue-collar fathers elected to go on their long-lasting lunar-related field trip. The reality that these absent fathers may not want to be bothered with them would hurt to the mental core so the digestable option is handily reasonable that the moon's destination is the ideal retreat for their fatherly "heroes".

Naturally, absentee fathers make for the tough transition for many boys to step up to the plate and assume the burden of domestic responsibility. The testing of manhood arrives unfairly early for impressionable male teens not prepared for such familial adversity. Enter Mickey (Jeffrey Wahlberg). Mickey is a 16-year old walking wrecking ball that has been heavily affected by his deadbeat dad Roman's (James Franco in a brief, convincing performance) departure.  His only parental support is his mother Eva (Rashida Jones), a hair stylist working in her quaint shop. Interestingly, Roman not being in the picture at all creates a different kind of emptiness for her as well.  For instance, Eva's impromptu acquaintance with an older boy at the grocery store is a welcomed distraction from her loneliness--until her son Mickey intimidates him as he soon decides to take off.

Indeed, misguided Mickey's alienation runs deep and dark. The trauma of his missing father Roman ignites a rebellious spark among the other youngsters around town filling their numbness with smoking, drinking, and collecting scrap metal objects out of smothering boredom. Time seems to tediously stand still for these neglected youths desperate to lash out within their arid, uneventful surroundings. For Mickey, the unfulfillment is unbearable to the point of acted-out destruction. His surfacing rage toward Roman ranges from destroying his father's personal items in bleak sadness to impregnating a local girl Sonya (Alyssa Elle Steinacker) whose father also left her without an ounce of hesitation.

There are plenty of youthful sufferers to compliment the inner torment felt by Mickey and Sonya. The father shortage has impacted Mickey's younger brother Kolya (Zackary Arthur) and hot-headed cousin Nick (Hale Lytle) when his father John (Jeremiah Noe) became the first official man to head for the moon. Mickey tries to do the right thing by his hindered mother Eva and little sibling Kolya but the overwhelming obstacles in comforting them in need while using troubling tactics around the tiresome town to tackle personalized painful issues turns into a canvas of drowning despair.

As a small-scale gem of detachment, Don't Come Back from the Moon is piercingly observant about the fragility of the family foundation...specifically when fathers/husbands routinely leave out of hopelessness, selfishness, and self-preservation. Cheung does not necessarily need to infuse the logical rationale as to why these men take the high road and never look back because there is an understood obviousness not worth exploring. Newcomer Wahlberg is an absolute find as the beleagueared Mickey saddled in a wasteland of severely brokened security and a fragmented fairy tale of male negligence. The moon is critically symbolic for the distance, instability, and unknown mysteries that these defeated fathers/husbands/boyfriends employ when all else seemingly fails and falters.

Thoroughly probing and perceptive, the conscious cow does not need to jump over this heart-breaking Moon.

Do you feel this content is inappropriate or infringes upon your rights? Click here to report it, or see our DMCA policy.
abandonmentdisillusionmentDon't Come Back from the MoonfathersJames FrancoRashida Jonesyouth