Blu-ray Review: SOME LIKE IT HOT Is Still One Of The Funniest Films Ever Made 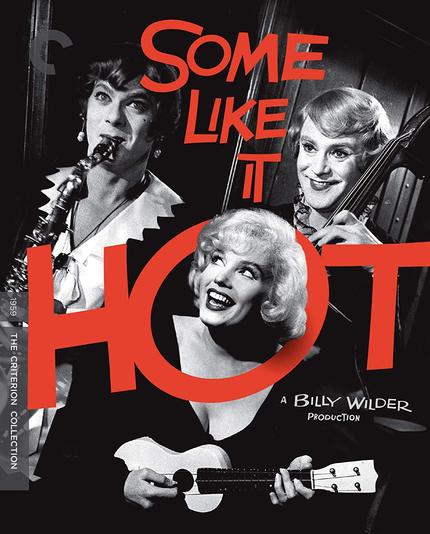 Much has changed in the media landscape since Billy Wilder's Some Like It Hot was voted the funniest American film ever made as part of the AFI's 100 Years 100 Laughs poll back in 2000. However, this film remains one of the most riotous laff-a-minute experiences in all of cinema, and it's no wonder with the amazing talent both behind and in front of the cameras. The screenplay by WIlder and frequent collaborator I. A. L. Diamond as interpreted by Jack Lemmon, Tony Curtis, Marilyn Monroe, and a who's who of '30s and '40s gangster films is sharp as a tack and leaves no joke untold. The result is a sparkling bit of old Hollywood charm that never seems to age.

Joe (Curtis) and Terry (Lemmon) are a pair of itinerant jazz musicians who have the misfortune of witnessing the St. Valentine's Day Massacre in gangland Chicago. When they are discovered they attempt to flee, but without a dime to their names, the only way to get anywhere is to find work. Unfortunately, it seems like the only positions available for a pair of jazz players are in all-female bands, so Joe and Terry become Josephine and Daphne by hopiing into dresses and onto a train with a ladies' band fronted by the scintillating Sugar Kane (Monroe). Next stop: Florida.

Once the group arrives at the resort where they are to perform, the charade gets even more complicated as Cupid's arrow flies and Joe becomes smitten by Kane and Daphne finds herself on the business of a crush from a visiting tycoon Osgood Fielding III (Joe E. Brown). As if that weren't tricky enough, their past catches up with them and the dizzy pair finds themselves on the run from the mob while trying to hold down their already crazy-making gig. It's a crazy adventure with an even crazier finale as Curtis, Lemmon, and Monroe burst from the screen with charisma to spare and the kind of snappy dialogue any actor would kill to get their hands on.

At a little over two hours, Some Like It Hot seems like it'd be a bit long for a comedy, especially in 1959, but Wilder & Diamond's script leaves no room for dead air as the witty dialogue and continuous hijinks keep the party rolling at a breakneck pace. While Curtis and Lemmon were consummate performers even back then, with well-practiced delivery that really complimented the dialogue, Monroe was more of a phenomenon than an actress. However, with the expert direction, and apparently infinite patience, of Wilder, she is able to deliver one of her best on screen performances here, not to mention the fact that she was styled to the nines in some of the most amazing wardrobe ever seen on the big screen.

There's nothing not perfect about Some Like It Hot. From the incredible dialogue, to the staging, to the spot-on casting, it is the result of a confluence of remarkable talent meeting up at just the right time. For a film that will celebrate its sixtieth anniversary this year, it feels just as fresh as if it'd opened last week. In fact, I showed my own fourteen year old son the film and he laughed everywhere he was supposed to laugh and you could tell that it really worked. Some Like It Hot is one of the greats.

The Criterion Collection had its work cut out for it with Some Like It Hot. Thankfully, they stepped up to the task and this is the definitive release of the film by a wide margin. The primary upgrade here is, as it should be, the brand new 4K digital restoration of the film, rendering this film with an absolutely gorgeous black and white image that is hard to beat. The image is clean, contrasty (in a good way) and as sharp as it has ever been. The uncompressed Mono soundtrack is excellent as well, presenting the crackling dialogue and numerous musical numbers beautifully.

When it comes to extras, a film like this had plenty to draw from with numerous special edition releases over the years, and thankfully Criterion seems to have picked up as many as possible to supplement the feature. Among the ported over extras are a trio of featurettes detailing the production and release, an interview between Curtis and Leonard Maltin, appearances by Wilder on The Dick Cavett Show, a very early 1989 audio commentary from Criterion's own laserdisc with Howard Suber, as well as archival interviews with Lemmon and Monroe.

The only newly produced feature is a wonderful look at the brilliant costumes of designer Orry Kelly featuring designer and historian Deborah Nadoolman Landis and historian Larry McQueen. Normally a featurette about costuming isn't the kind of thing that would fly my sail, but in this case they provide incredible context for the work in the film, as well as showing actual examples and it's the passion of these experts that really makes this so wonderful to see. Absolutely great stuff. Also new to this set is a booklet essay by Sam Wesson that succinctly explores some of the reasons the film works so well. It all contributes to a fantastic presentation of one of the finest films ever made.

If you like it hot, the Criterion Collection's new Blu-ray of Some Like It Hot is the only way to go.