REVIEW: The King documentary hitches a decent ride on the late Elvis Presley's 1963 Rolls Royce for a riveting road trip in search of the American Dream 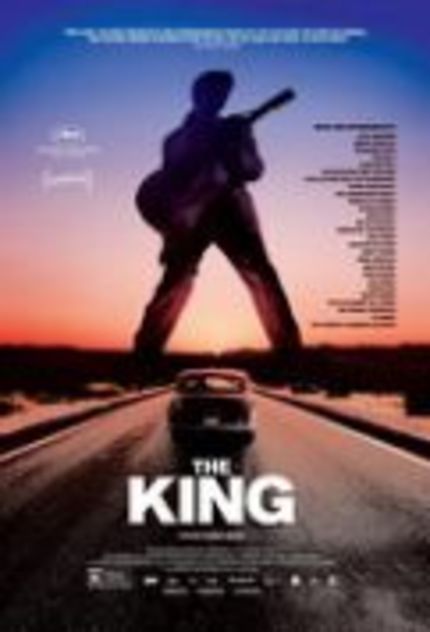 Elvis Presley may "have left the building" over four decades ago in death but he still reigns supreme in the eyes of diehard fans worldwide that continue to worship the iconic entertainer. Young and old or the famous and unknown alike cling to their memories of the proclaimed King of Rock-n-Roll that shaped the musical landscape with his brand of swagger that one time earned him the noted nickname "Elvis the pelvis". There have been countless takes on the Presley legacy through pop culture circles throughout the generations. Hence, what filmmaker could aptly approach the overly familiar subject matter of Elvis Aaron Presley from a distinctive perspective?

Co-writer/director Eugene Jarecki's ("The House I Live In") The King is a bouncy and reflective sentiment about Presley's ever-lasting staple on the American psyche both past and present. Indeed, Jarecki wants to examine Elvis's nostalgic impact and how the mindset of America's glory days had benefitted from the worshipped singer's presence and absence. Furthermore, Jarecki's observational eye for The King dares to symbolically travel the rhythmic roads remembering Elvis while examining the landscape of American sensibilities through Presley's prized possession--his 1963 Rolls Royce Phantom. It is an unconventional move that pays off because Elvis Presley has been explored from every angle it seems but his treasured wheels are able to literally drive into the hearts of the people nationwide and recall their King-related anecdotes.

Dubbed by many as the greatest showman to hit the scene in the 20th century, Elvis's influence and affection is recalled as Jarecki uses his vintage ride to tour the country while collecting the thoughts of those that revered Presley with undying praise. Specifically, the Presley admirers are literally placed in the King's blue suede shoes...well, okay...his classic car as they roam the countryside and talk turkey about the lyrical legend. However, not all the fodder about Elvis are innocuous fodder about puppy dogs, cherry pie, and blooming flowers. The documentary--although complimentary--pinpoints some of the tragic static that befell Presley before, during, and toward the end of his celebrated musical career. The Mississippi-born country boy-turned-rock idol had his scandalous moments and even dabbled away from the music stage as he crossed over into movies and television appearances. No doubt that Presley was a complex soul behind the heralded hype.

Jarecki steers the decorated vehicle to an obvious locale...Elvis Presley's hometown in Tupelo, Mississippi where the locals pound their chest proudly as they claim their famous native son. While riding along and crossing America we are afforded feedback from regular folks but the well-known faces such as Alec Baldwin, Ethan Hawke, and Emmylou Harris offer their two cents worth of admiration. Also, the insiders that knew Elvis up close and personal such as ex-Memphis Mafia tag-a-long Jerry Schilling, ex-girlfriends, and nightclub owners dish out their recollections about the larger-than-life crooner. However, there are some that do not necessarily place Elvis on a high pedestal in terms of his cultural relevance. For instance, black artists such as Public Enemy's ground-breaking rapper Chuck D have been vocal for quite some time about Presley capitalizing on the black-oriented sounds and beats that helped him become the music industry's big deal en route to getting super wealthy off of black musical creativity.

Interestingly, Jarecki takes The King into the leftist political spectrum when he invites the viewpoints of such partisan mouthpieces as Alec Baldwin, Van Jones, and James Carville making crucial comparisons of today's American hot political climate with that of yesteryear's socio-economic-political leanings in the pre/post-Presley showbiz era. Would Elvis approve of such Trumpian excess in materialism, scrutinized media storms, and subtle/overt division amongst the flustered masses? One might tend to believe that Elvis would feel a sense of comfort in the MAGA movement.

The King has its uneven edges but it comes from a genuine place where the concept of Americana linked to the triumphs and tragedy of old-school musical wonder Elvis Presley plays resourcefully with its contemplative spin on a beleaguered nation struggling to hold on spiritually despite its increasing uncertainty. Jarecki, a Grand Jury Prize winner at Sundance, dutifully seduces us with the Elvis Presley mystique and his brand of antiquated celebrity applied to the current-day mindset of American consciousness.

Do you feel this content is inappropriate or infringes upon your rights? Click here to report it, or see our DMCA policy.
celeb cameosdocumentaryElvis PresleyEugene Jareckiroad tripThe Kingvehicle