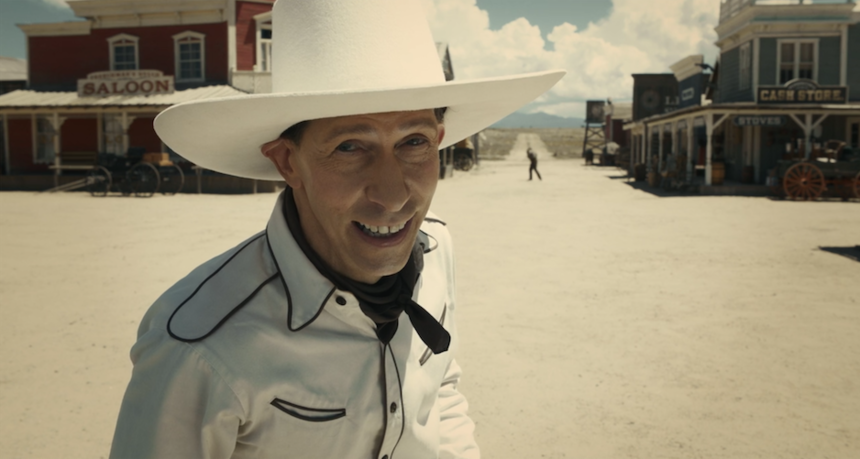 In the days after I first saw the highly anticipated, long time coming anthology Western from the brothers Coen at The New York Film Festival, the most common thing I’d overhear when eavesdropping on the many Scruggs conversations ensuing around the Lincoln Center was, ‘What of the title?’, sometimes with hints of disdain.

A woman with whom I spent two hours while in line for Roma offered that it was simply the title story from a collection. As in ‘The Ballad of Buster Scruggs… & Other Stories.’ I like that. But still, why this tale to represent the lot...if it indeed does to any meaningful extent?

Scruggs is a film that’s been in the works for many years - as early as O Brother. My understanding is that the varying tales - in veins from Zane Grey to Gene Autry to Rod Serling - have been marinating ever since. Nelson reflects the Coens’ propensity toward side-splitting whimsical entertainment, as seen in laugh riots like Barton Fink, Hudscuker Proxy, O Brother, and on. Recalling the seminally hysterical Raising Arizona, a film now 30 years old, Scruggs demonstrates that the brothers have not tired of exploring the unsettling marriage of cartoon violence.

One of cinema’s oldest fascinations, the Wild West, reflected an era when life was cheap and living dangerous, and many a great artist has used frontier towns and times to meditate on the ultimate equalizer that is death. The Western has offered a richly expansive world and it’s easy to understand why aficionados such as the Coens found it too difficult to settle for a single flavor in their own determination to take on the hallowed ground, opting instead for a deliciously differing six.

Published in 1873 by Mike Zoss & Sons, The Ballad of Buster Scruggs gives us six distinct tales of ancient storied folks facing mortal encounters. Some are riveting, some ironic, one is amusingly zen, one is downright heartbreaking, but only one ends with a man singing his way to heaven, longing for a future when we can all, “shake our heads at all the meanness of the used-to-be.” Some peg the death-dealin’, happy-go-lucky Scruggs for a misanthrope, but we believe him when he says he’s not hateful at all. With an omniscient narrator’s sense of the big picture, Buster always looks on the bright side of life - even when faced with his own ending. It’s a story as profound as the saddest in the collection, but one impossible to watch without a smile. Now that’s something worth naming an anthology after.

While at NYFF I had the pleasure of sitting down with Mr. Blake-Nelson to discuss his uproarious contributions to the Coens’ comedic canon. Feel free to imagine Nelson’s good natured grin plastered on his face throughout.

ScreenAnarchy: When did you first hear of the existence of this project?

Tim Blake Nelson: 2002, I think. Right after O Brother came out. Joel dropped the script by. We used to be neighbors and he dropped it by with a big grin on his face, and yeah, I read it. And they said, it's not going to be any time soon, but we're going to keep writing these. And eventually it's going to be a movie, and we'd like you to play Buster.

And your reaction to that script?

Did it go through any changes in the eighteen years?

No. No. I don't think a word changed. And I think, pretty much, every word I say in the film is on that page.

Yeah, verbatim. I don't think there's a single deviation. Not a definite article, not a preposition, nothing. No changes in the sentence structure. It's all exactly as they wrote it.

Right. And I reckon that was the situation for O BROTHER as well, probably?

Yeah. There was one sentence in O Brother where I went and asked Ethan if I could rearrange a sentence. And he thought about it, and he said, alright, yes. That will be good.

So what are the brothers like on set? Are they laughing?

Incredibly easy going. Yes. Constantly laughing and the more morbid and violent and poignant a moment, the more they'll laugh.

Do you have kids, I'm just curious?

I have three kids.

Are they youngsters? Have they seen the film yet? Were they into the cartoon aspects of the film?

I have a 13, a 15, and a 19. And when I brought those pistols into the house -because I spent about five months learning to twirl the pistols - they were constantly handling them, trying to twirl them, putting the belt on. It was mayhem.

One of them saw it last night. The middle one was going to see it, but he had a paper due. And then I have one who's off in Ohio at Oberlin, in college. And so he's going to see it in New Orleans.

In the 90s, correct me if I'm wrong, you didn't go out for that many comedic roles prior to working with the Coens?

Well, let's see. I did Heavyweights. I did Nora Ephron's first movie, which is a comedy. It was a mix, I guess. In the 90s, I was just begging for anybody who would have me. Literally, I was just, anything, anyone who would meet with me. I just went.

And the next thing you know, you're representing Coens at their funniest, at their most uproarious. How must that have felt?

Yeah. It was, you know, like I have been fortunate like so many others, who they've drawn into their world. You think about Steve Buscemi and John Turturro and Philip Seymour Hoffman. Actors who interested them. Who weren't necessarily, before the Coens became interested, interesting to anyone.

I know that was the case for me. I'd done about a dozen movies at that point, but had to beg and, you know, I spent ten years acting in theater and begging for parts on screen. And doing commercials, and anything that I could get. But because they're so unconventional, they end up being drawn to people who you wouldn't necessarily expect to see in movies. And so, I got my chance.

You sure did. I would feel like watching films like O BROTHER and BUSTER SCRUGGS, it would be easy for you to just turn yourself off to the fact that you're watching yourself on screen and just watch the movie. Because they're so damn good.

I just marvel at the filmmaking. Because since I also direct my own movies, I know how difficult it is to accomplish what they do. And the precision of every moment, the timing, the lighting, the wardrobe, the mastery of every aspect of what goes into a story told with pictures and sound. When it's directed and written by them, it's at a rare level that few others accomplish.

Do you happen to have a favorite joke in either or both of your Coen films?

Well, I always laugh in O Brother at the line, “I'll only be 82.” That just, when I read it, and realized that I would get to say that, I just couldn't ... and I laugh every time I see the movie. I thought about, as the day approached where I got to say that to George and John, I just couldn't wait to say it. And then I laughed. I laugh every time. That's a great line they wrote.

And I guess in this one, I like when he says, “Calls for reflection.” And Joel said, “Well just dig your finger in your ear when you're saying that.“

There are some exceptional visual gags in your segment. Was it green screen heavy?

The only green screen in there at all was when I fly into heaven.

Can you reveal the magic behind the table’s loose board?

That's me kicking it and it's just a loose board. And I luckily have this other movie coming out, it's actually premiering at the New Orleans Film Festival right before Scruggs that doesn't have distribution yet, called Don Quixote.

Well, that's where we shot it.

And I had to do a headstand in that movie. And so, I did about five months of yoga. So, when Joel said, you've got to be as still as you can and knock that slat on the table, I was able to do it just because I'd been doing yoga for five months. Really, there's no digital anything in there, other than, of course, the gunshot and the brains flying out of his head.

Of course. So tell me about the ghost town! Where did you shoot? Did it feel like you were in a classic Western on set?

Right. Because you open with the fictitious western.

Before things get a little more outwardly existential.

So, how long was the shoot?

Mine was about two weeks.

Was there one day when you just went to bed thinking, ‘Ah, what a day I just had?’

A lot of the days. Because he was in every section. The dance... that was the trying day. We tinkered with it, and I'd been rehearsing it for a couple of weeks.

What would you say you spent the majority of that prep doing?

Learning to play the guitar. From scratch. Learned to play chords.

At 53, it's impressive. As you get older, it becomes harder to learn shit… And then the pistol twirling. It was a daily routine, playing and twirling in the house.

Did you stick with the guitar?

A little bit. I strum it now and again.

Do you feel this content is inappropriate or infringes upon your rights? Click here to report it, or see our DMCA policy.
Ethan CoenJoel CoenNYFFThe Ballad of Buster ScruggsTim Blake Nelson