Review: MOBILE HOMES Peers Into the Depths of the Lower Class

The surprising, cold and deadly performance by Imogen Poots in Jeremy Saulnier's Green Room (2015) caught me off guard, perhaps because I associated the actress more with her slighter roles in Cracks, Fright Night, and Need for Speed than with her early, very demanding supporting role in 28 Weeks Later.

Two years ago, she caught my eye again in Cameron's Crowe's series Roadies, standing out for her ability to capture a certain lighter-than-air quality in her character; I was beguiled by her appearance and bearing, a bright spot in a series that never quite lived up to the potential of its premise.

Perhaps if I'd seen more of her earlier films, which range all over the map from comedy to drama to thrillers, I'd have been more prepared for her deft work in a starring role in Mobile Homes, a drama that endeavors to peer into the depths of the economic lower class in North America.

Filmed in Ontario, Canada, and set during a harsh winter, Poots plays Ali, a young mother who is sharing a life on the run with her son Boone (Frank Oulton), aged 8, and her current lover, Evan (Callum Turner, who also appeared in Green Room).

Ali and Evan are criminal cohorts and carnal bedmates. Ali expresses affection for the young Boone, but pays him little mind on a day to day basis. She raises an eye in alarm when Evan begins training Boone to join them in their illegal activities, but puts up no big protest, really. She believes Evan loves her son too. She talks dreamily about the future with Evan, fantasizing that they will buy a mobile home together one day and live far away from everyone.

All this suggests strongly that Ali likely survived an impoverished, troubled childhood herself to become a young, single mother, with nowhere to turn and no goal in mind except to escape from her past. Desperate to couple up with any man who might not abuse her too harshly, she seems grateful that, while Evan's treatment of her and her son is rough, there is something like love behind it. 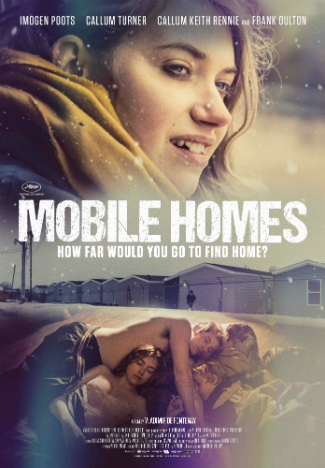 She's only deceiving herself, of course, and when Evan's true motives are exposed, she runs away with Boone, landing by chance in a mobile home that is being hauled away by a somewhat less rough and somewhat older man named Robert (Callum Keith Rennie). He is cantankerous in the old-time movie style, with a gruff exterior and a heart of gold, so naturally he puts Ali to work on the mobile homes he manages.

Physical labor begins to transform Ali, of course, in what has now become a fable for poor people. She begins to develop true love for Boone and assume her rightful motherly duties. The sun has begun to shine again in the winter climes when trouble comes knocking, very, very loudly.

Writer and director Vladimir de Fontenay takes his time, establishing beyond any shadow of a doubt that Ali is living in an unpleasant, unsustainable environment with her kid, paired with a man to whom she is fatally attracted, in that Glenn Close, 'boil a bunny' sense. Except that things don't progress that far before Ali finds herself with a new life, and begins to contemplate how things might be on her own; or, rather, just her and Boone.

In her performance as Ali, Poots reveals the character discovering things she didn't know about herself. Even as the narrative becomes more labored and, eventually, somewhat ridiculous in its excessive, extremist nature, Poots grounds it in reality to the fullest extent possible. Callum Keith Rennie always brings a measure of pained authenticity to his roles, so he's effective as well. Callum Turner is charming and confident and not quite as evil as we need, in order to believe his words and actions, but his interplay with Poots is engaging and convincing.

It's tempting to say that Mobile Homes is slow and lumbering -- it might make for a better headline -- but my truthful reaction is that the film is earnest and sincere, even if it's not as insightful as it believes itself to be.

The film will open in select theaters on Friday, November 16. Check local listings for more information.

Do you feel this content is inappropriate or infringes upon your rights? Click here to report it, or see our DMCA policy.
Callum Keith RennieCallum TurnerImogen PootsMobile HomesVladimir de Fontenay