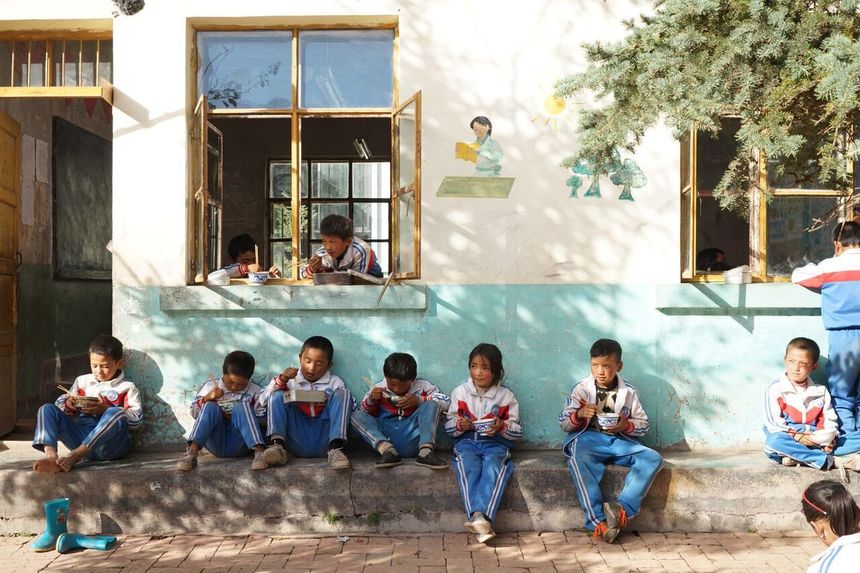 Wangdrak (Druklha Dorje) is a spirited first-grader living in a rural farming village in Tibet. As the movie begins, his daily routine, walking to school with a neighborhood girl, playing with his wind-up frog, has been disrupted by the rainy season and his lack of proper footwear.

The walk to school is treacherous with deep rain puddles, and poor Wangdrak has to be carried across by his friend. If that humiliation wasn't bad enough, he has to endure his classmates brazenly enjoying their rain boots and splashing about, carefree, all recess long. Unfortunately, his family doesn't have the means to buy him the galoshes he requires. His father is a farmer, the success of his crops at the mercy of the elements, while his mother stays at home tending to their modest dwelling.

Wangdrak's quest to convince his parents to let him buy rain boots is only the jumping-off point for this charmingly intimate film's narrative. It ultimately winds up in a rather unexpected place, yet one that makes perfect sense for its pint-sized protagonist.

The film is a delightful mixture of the mundane life lived by the adults in the village (e.g., town meetings about who gets to water their crop first) and the magical, expansive macro-world inhabited by the children, where inconsequential concerns are mountain-sized and the smallest of pleasures are fiercely coveted.

Director Lhapal Gyal, 28 years of age, has several shorts and a Beijing Film Academy degree under his belt, but Wangdrak's Rain Boots is his first feature. Gyal himself is from the province in which the movie is set, lending an affectionate, yet matter-of-fact quality to the camera's gaze. The village's poverty, or its inhabitants' own religion and superstition, are neither fetishized, mocked, nor condemned; they are simply presented, documentary-style, as part of Wangdrak's everyday world. Still, if cinematic cultural tourism is what you're after, you can certainly find it in Gyal's film: the idyllic landscape, the village nestled at the foot of several looming mountain ranges, and the glimpse of modern-day traditional Tibetan life are compelling enough reasons to seek this one out.

Sure to be an audience pleaser for the aforementioned reasons, Wangdrak's Rain Boots also showcases Gyal's impressive sensibilities as a director. Wisely, he opts to keep the tone light, with a sense of childlike curiosity throughout. There are moments when Wangdrak's teacher is being mean and petty, or times when his father threatens him with a beating, but nothing truly dark happens.

Navigating narratives with severe tonal shifts is difficult for even the most seasoned master filmmakers -- and Gyal was shrewd in avoiding that trap on his first outing. In doing so, he's made a movie that's adorable, easy to like, and sure to keep the door open for the future festival acceptance of his sophomore feature.

Do you feel this content is inappropriate or infringes upon your rights? Click here to report it, or see our DMCA policy.
2018chineselhapal gyaltibetanvancouverviffwangdrak's rain boots