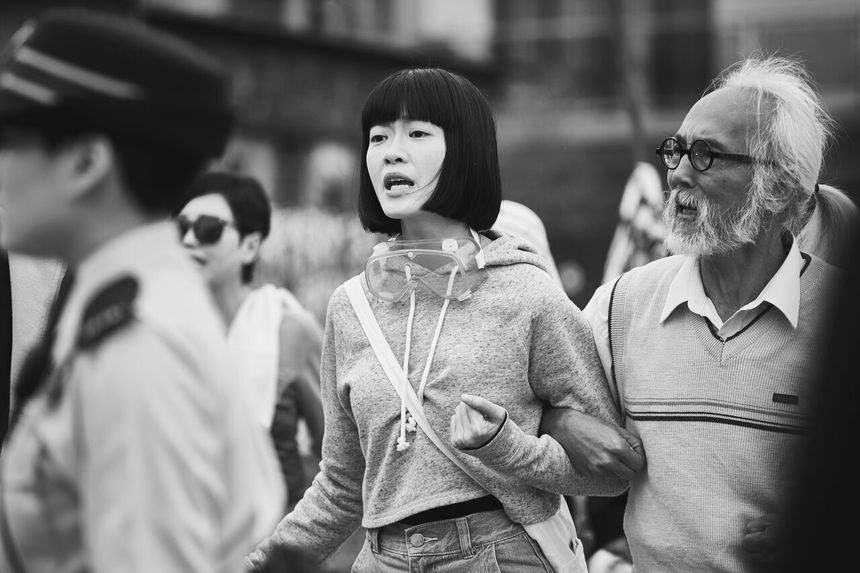 No. 1 Chung Ying Street is the latest from director Derek Chiu, a well-established figure in the Hong Kong film industry. The movie takes place during two periods of political unrest in Sha Tau Kok, a neighborhood that borders mainland China in Hong Kong's New Territories. The runtime is almost evenly split between the past and (near) future, with the same lead actors in dual roles.

The first half is set in 1967, when citizens loyal to communist China are mounting protests against the British rule. Lai Wah (Fish Liew) just wants to focus on her studies, and one day move abroad, but her childhood friend Chun Mun (Yau Hawk-Sau) is involved deeply in the anti-British movement and inevitably draws her in. Meanwhile, Chi Ho (Lo Chun-Yip) is a milder, apolitcal fellow student who wants to woo Lai Wah, even if it means accompanying her all over Hong Kong on Chun Mun's impulsive trail.

All three characters are familiar tropes: the loyal, suffering woman, the hotheaded, stubborn passionate youth, and the 'good guy' who never gets anywhere for being such. They resurface again for the second half of the film, which takes place in 2019.

This time, Fish Liew plays Sze-wai, a woman who has just been released from prison for her involvement in the "Umbrella Revolution" of 2014. That protest was a reaction to China's wish to change Hong Kong's electoral procedure -- casting another dark shadow on Chun Mun's support of China in 1967. The other two young actors once more play the primary men in her life, one with a passion for her, the other with a passion for politics and a lack of consideration for anything else.

Upon her return to the family farm, Sze-wai finds that their land has been unceremoniously sold, without the consent or knowledge of the inhabitants. They all band together to mount another protest, which may prove as ineffective as the others. But, to paraphrase one character, "if you love something, you should stop at nothing to protect it." While the film's societal implications are rather bleak and pessimistic, it always champions the spirit and courage of its protagonists and the people of Hong Kong.

The film's low budget is mostly masked with gorgeous cinematography by Lai Yat-nam. It does show its seams with some of the redundant stylistic choices (e.g., an abundance of slow motion scenes that fail to be as dynamic as intended). The film also often gives in to melodrama and leans too hard on ensuring that the audience realizes a moment is tragic, when the depiction of the event should speak for itself.

That said, Chiu has made a moving and genuinely educational film that examines not only some ugly truths about Hong Kong's past, but its present as well. While it may not be the most elegant cinematic experience, it has enough heart and passion to make up for it.

For history buffs, or those interested in Hong Kong specifically, No. 1 Chung Ying Street is a fine way to experience a chapter in time that hasn't often been illuminated. The fact that Chiu encountered some barriers in getting the film made (ten years in the making since inception) says a lot about the current state of affairs in Hong Kong, and validates the necessity of this narrative.

Do you feel this content is inappropriate or infringes upon your rights? Click here to report it, or see our DMCA policy.
2018derek chiufish liewhong kongvancouverviffYau Hawk-SauSung Kee ChiuKin Long ChanHistory