Full disclosure, I am not familiar with the manga Liverleaf (or as it is called in Japan, Misumisô) was based upon. With that, I fear some of my criticisms may be pointed to the source material and not the film.

But, I also believe that I’ve seen enough movies to know that the best adaptations are those that don’t just adhere to any material or replicate things beat for beat, they understand the message, what it is about, and enrich it. I wish Liverleaf took some more time to do just that.

At its core, Liverleaf, directed by Naito Eisuke, is a classic tale of bullying gone wrong.

Set in a rural town by the mountains of Japan, it evokes the small town dread that works like The Virgin Suicides, most of Stephen King’s oeuvre, and (I am saying this with an ughhh) Riverdale carry. It is insidiousness hiding behind the idyllic, malice behind pleasantry.

Liverleaf centers on middle school student Haruka Nozaki (Anna Yamada). Recently arrived from Tokyo, we immediately see a reversal of Western tropes, as coming from the city here is the opposite of a boost to Nozaki’s street cred. Instead, she is subjected to the torment of the cool kids. Her only friend is the fellow transferee, and soon love interest Mitsura Aiba (Shimizu Hiroya).

Liverleaf’s first thirds play out like a grounded high school drama. As Nozaki is bullied on a daily basis, her only sources of solace are her parents, sister, and Aiba. The school she is in is due to close permanently in a few weeks. Thus, teachers couldn't care any less if savagery is happening in their classes. One even literally turns her back on them. (If this is a metaphor to schools’ complicity to bullying, it’s a bit too overt.)

We get to see the titular liverleaf, a wildflower that withstands the harshest of winters before blooming into the beautiful blossom it is meant to be. Aiba dreams of Nozaki being this flower, holding up just until graduation, then running away with him after.

But things take a dark turn after another bullied student, Rumi (Ohtsuka Rena), suffers from a psychotic breakdown. In an attempt to swing the bullies’ attention back to Nozaki, Rumi decides to lead them in burning Nozaki’s home. Unfortunately, Nozaki’s family is still inside when they do so.

And what once was a soapy teenage story takes a jarring tonal shift towards schlocky, revenge-themed, B-movie territory.

Winter soon arrives, and just like the liverleaf flower, our protagonist decides to withstand both the literal and metaphorical winter. Her method of doing so, though? Going full-on Lady Snowblood on her tormentors. 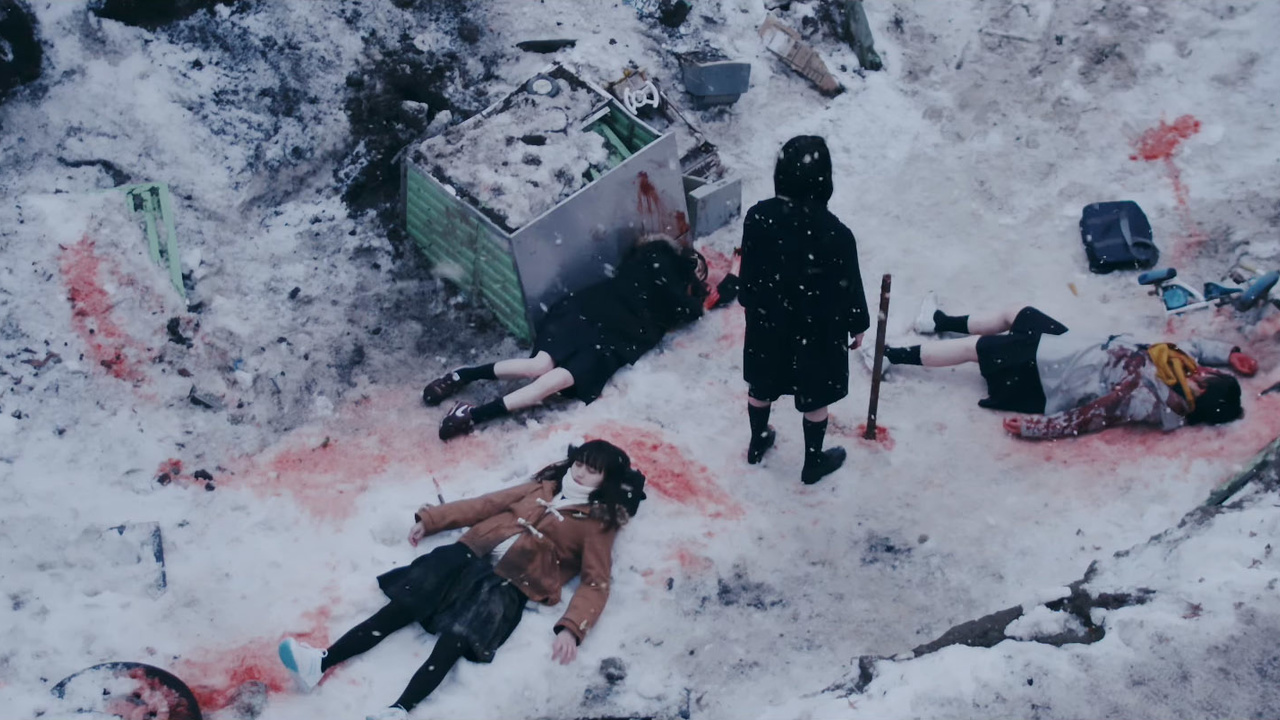 To call the film cartoonish and too hyper-stylized may be seen as a compliment by director Naito. But what I find as a wasted opportunity, though, is foregoing all character nuances (e.g. Rumi’s madness, bully ringleader Taeko’s [Ohtani Rinka] true sentiments about Nozaki) in favor of over-the-top action and revenge movie gore.

This incongruous tone can be a bit problematic as it removes the catharsis that makes revenge movies so satisfying. As a film that tackles -- and plays its first act -- as a relatable, grounded tale of just how sinister teenagers can get, moving to glamorized violence makes a caricature of its earlier message.

By the time the film goes into overdrive, Nozaki now full-on an embodiment of the “mute and deadly” killer trope (she loses her voice as an effect of trauma), it becomes evident that the film intended to be a B movie, reminiscent of grindhouse genre flicks, all along.

Weapons automatically spawn from nowhere, deaths become more and more outlandish, and everyone seems to have the propensity to murder or are hiding a dark secret.

Though to be fair, the way Liverleaf chooses to go about all these lead to some great visuals. Especially, as it frequently contrasts the unusually bright blood of its characters with the icy exteriors of the village.

There are also some fun performances here and there, like Ohtsuka Rena’s distraught Rumi.

But in general, I feel like Liverleaf is neither here nor there. Not profound enough to share a nuanced and cohesive take on a timely topic, not committed enough to be the campy good time we’re hoping for.

Do you feel this content is inappropriate or infringes upon your rights? Click here to report it, or see our DMCA policy.
Anna YamadaJapanLiverleafMangaNaito EisukeÔtani RinkaShimizu Hiroya