Yamazaki Takashi's newest is happy, twee, and childish, but ends witty and is visual candy. 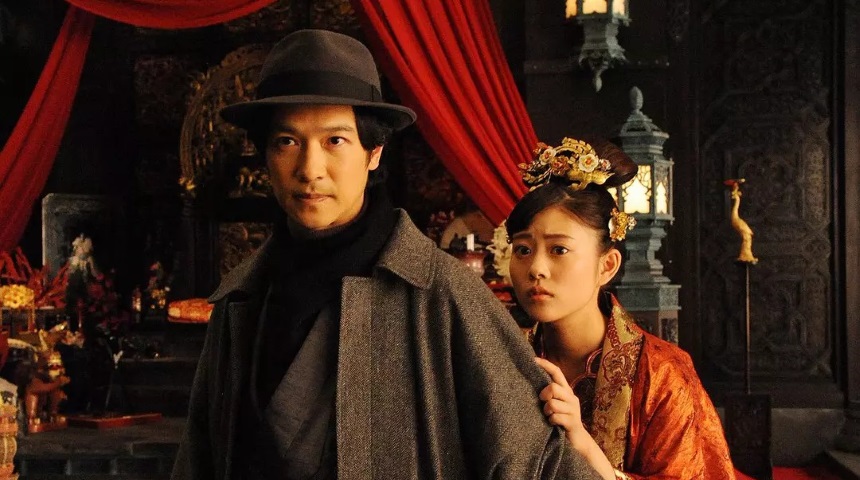 This year, the Dutch Camera Japan Festival is being held for the 13th time, and to celebrate that, its theme is "superstition and the supernatural". Opening the Rotterdam leg of the festival was Yamazaki Takashi's new fantasy Destiny, The Tale of Kamakura, and a more fitting film would be hard to find, as it is virtually crammed with ghosts, yokai, and Gods.

In its story, we follow newly-weds Isshiki (Sakai Masato) and Akiko (Takahata Mitsuki). He is a famous thriller writer, she is a student who studied his works, they fell in love, and now that the honeymoon is over, the happy couple move to Isshiki's mansion in the old village of Kamakura, an area with dozens of old temples.
As she settles in, Akiko discovers a few startling facts. For starters, Kamakura houses not just humans, but all sorts of spirits as well, and people who live there (like Isshiki) are used to that but keep it a secret for outsiders. Second, her husband doesn't just write detective novels, he actually helps the local police whenever cases turn out to have a supernatural slant.
Day by day, Akiko grows more accustomed to her new life, and the strange stories around her become more common. All seems well, but an evil presence is at work behind the scenes, intent on destroying the couple's happiness... 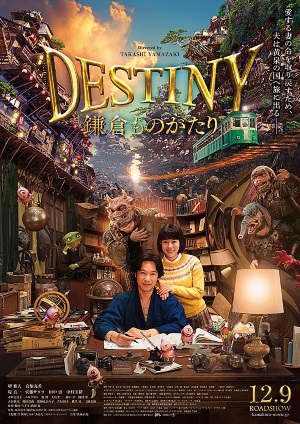 Writer-director Yamazaki Takashi is no stranger to visual effects. His early films Juvenile and Returner already depended heavily on them, and his nostalgia-fueled box office blockbuster trilogy Always Sunset on 3rd Street is peppered with memorable "trick" shots. Indeed, he is a visual effects expert himself, and is responsible for the look of films like K-20: The Fiend with Twenty Faces and Shin Godzilla. It should therefore not be a surprise that his newest film leans strongly on visual flair.

For Destiny, The Tale of Kamakura, Yamazaki adapted a famous old manga by Saigan Ryouhei, who had also created the source materials for the Sunset on 3rd Street films. And it shows: once again we see a nostalgic pastiche of short stories concerning residents we slowly get to know better. For the first 90 minutes or so, the film meanders pleasantly between these characters and their adventures, and everything is happy, sweet, twee, slightly childish, and (rubber CGI-alert) slightly fake.

Therefore it comes as a surprise when, in the last 30 minutes, suddenly the stakes get raised, and you as a viewer find yourself emotionally affected by these characters. On top of that, Yamazaki then pulls out all the stops on the visual front, providing glimpses of other worlds almost worth dying for. Consider me impressed!

Destiny, The Tale of Kamakura borders on being dangerously sentimental and saccharine, but in the end conjures up enough thrills, charms and wit to fall just on the right side of 'sweet'. For many, this film will probably still be too cloying, but I ended up being enthralled enough by this fairy-tale to thoroughly like it.


Destiny, The Tale of Kamakura still plays at festivals, and Camera Japan Amsterdam will be showing it on Sunday the 7th of October.