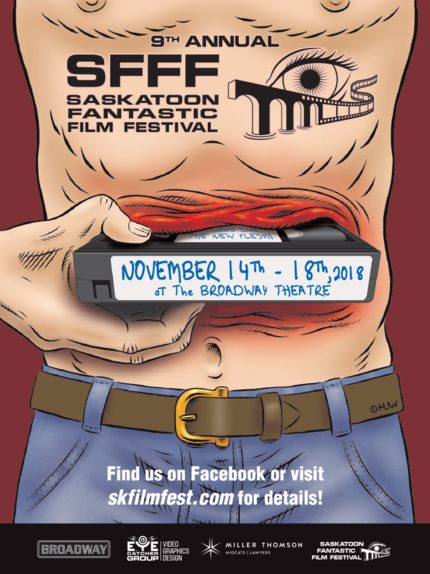 Something awesome this way comes! Well, if you’re a film enthusiast who happens to be living in or around Saskatchewan that is. Already celebrating its 9th edition, the Saskatoon Fantastic Film Festival (November 14 - 18) will once again descend on the Broadway Theatre to give fans of the fantastic, the freaky and the all-around phenomenal a bevy of treats they won’t want to miss.

A very interesting and well-deserved addition to the lineup is Elle Callahan’s Head Count, one of several genre gems about to world premiere during the Los Angeles Film Festival.

Uncoincidentally, the poster gives an approving nod to Cronenberg’s Videodrome, which is one of three films included in this year’s Body Horror Retrospective.

Keep an eye on these pages for the full program announcement in weeks to come and read on to discover all of the first wave details below.

Saskatoon – September 17th, 2018 - Saskatoon Fantastic Film Festival, Saskatchewan’s largest feature film festival returns for its 9th edition at the Broadway Theatre this November 14th through 18th with an extra day, a larger line-up of films, cartoons and a retrospective on body horror.

“Adding in the extra day has allowed us to up our game with the festival. Our focus continues to be bringing in the best new genre films to Saskatoon but with the extra time available we are screening more movies than ever, adding in the Saturday morning all you can eat cereal cartoon party, and the first of hopefully many retrospectives, with this year’s subject being Body Horror.” said festival founder and Director John Allison.

More information is available concerning the Saskatoon Fantastic Film Festival at www.skfilmfest.com, by contacting Festival Director, John Allison at john@skfilmfest.com or by phone at 280-2868.

SUPERGRID is an upcoming feature film from the team that brought you WOLFCOP. In the near future, a young smuggler is forced to make a run on the road that took the life of his sister. He has to convince his older brother to get back on the "Grid" and help him clear the debt.

Rini has been living at her grandmother’s in the countryside with her parents and three younger brothers since they had to sell the house uptown to get medication for her mother who has been mysteriously ill for more than three years. After her mother dies, Rini’s father goes to a faraway town to work. Evil entities haunt Rini’s house and start to terrorize her and her brothers. Rini traces back the roots of the evil and learns that her family was involved in an unholy pact in the past. She must face the horrifying truth from the past to stay alive.

During a weekend getaway to Joshua Tree, a group of teenagers find themselves under mental and physical assault from a supernatural entity that mimics their appearances as it completes an ancient ritual.

TIGERS ARE NOT AFRAID

Thousands have been murdered or gone missing in Mexico's ongoing violent drug war. The result is many orphaned children living on the streets caught in the unceasing cartel crossfire. In her third work of immense beauty, pain, fear and joy, writer/director Issa López tells the magical story of five such urchins making the best of their daily struggle to survive. Perfectly balanced between harsh reality and the fantastic, this unflinching cautionary fable is part PAN'S LABYRINTH, part CITY OF GOD, all innovative South of the Border fairytale.

Fleeing from the grasp of a possessed woman, a distressed cabdriver begins a confession in a rundown police station that endangers everyone who crosses her path.

A teenage girl and her father travel to a remote alien moon, aiming to strike it rich. They've secured a contract to harvest a large deposit of the elusive gems hidden in the depths of the moon's toxic forest. But there are others roving the wilderness and the job quickly devolves into a fight to survive. Forced to contend not only with the forest's other ruthless inhabitants, but with her own father's greed-addled judgment, the girl finds she must carve her own path to escape.

A troupe of young dancers gathers in a remote and empty school building to rehearse. Following an unforgettable opening performance, the troupe begins an all-night celebration that turns nightmarish as the dancers discover they've been pounding cups of sangria laced with potent LSD.

SATURDAY MORNING ALL YOU CAN EAT CEREAL CARTOON PARTY

Curated by film programmer writer and pop culture connoisseur Kier-La Janisse, Saskatoon is in for a real treat with 3 hours of the weird and wonderful world of cartoons from the 40s through 80s.

When Max Renn goes looking for edgy new shows for his sleazy cable TV station, he stumbles across the pirate broadcast of a hyperviolent torture show called Videodrome. As he struggles to unearth the origins of the program, he embarks on a hallucinatory journey into a shadow world of right-wing conspiracies, sadomasochistic sex games, and bodily transformation.

Residents of the suburban cul-de-sac Pebbles Court receive unexpected samples of an experimental vitamin made by a strange health spa named Vimuville. When the town adds the powder to their diets, they experience strange macabre visions -- and worse, their bodies mutate, ooze, and melt! As coroner visits become daily, Detective Phillips suspects Vimuville -- but will he uncover its diabolical motives before the whole of Australia is subjected to BODY MELT?!?!

Do you feel this content is inappropriate or infringes upon your rights? Click here to report it, or see our DMCA policy.
CamLuzProspectSaskatoon FantasticSatan's SlavesTigers Are Not Afraid