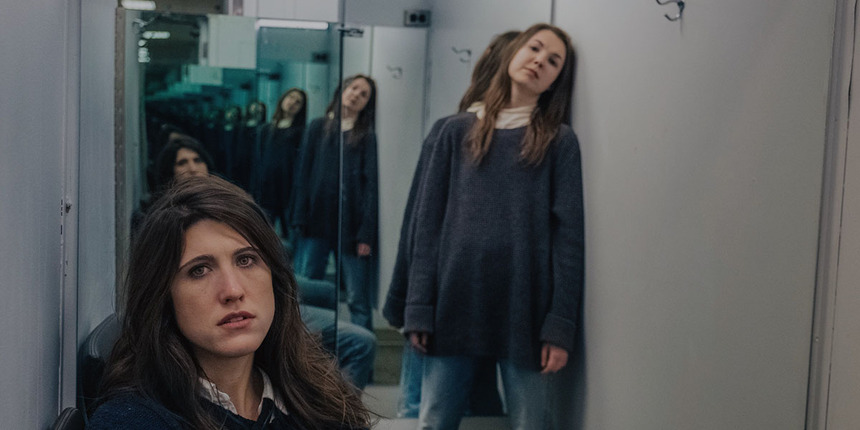 For those who have a relationship with their parents, there are likely points, no matter how good that relationship is, when that relationship is difficult. This can be especially true between the parent and child of the same gender identity: as children, we look to that person, the first in our lives, to understand how we, as a woman or man, might choose to be, or in some cases not be.

As women strive for equality and recognition for their skill, there can be conflict between the different generations; the victories that one generation achieves are easily accessed by the next, and younger generations have opportunities lost to the older. This can create resentment even in love.

Patricia Rozema’s latest feature Mouthpiece looks at just such a relationship. Adapted from the experimental theatre production by Amy Nostbakken and Norah Sadava, who reprise their roles and adapted the work to the screen with Rozema, it is both a metaphysical, and deeply physical and emotional, contemplation on how we process grief. At once a piece of rage and anger, fear and bereavement, love and affection, that is not only one of the best play-to-film adaptations I’ve seen, but a cinematic punch to the gut and simultaneous grip on the heart.

Not long after Christmas, Cassandra’s mother Elaine (Maev Beatty) dies suddenly, and Cassandra must assist with the funeral arrangements, and prepare a eulogy (much to the chagrin of her brother, father, and aunt). Cassandra (played by both Nostbakken and Sadava at the same time) has little time to figure out what she wants to say about her often fraught and recently estranged relationship with the person who, even if she can’t admit it, was closer to her than anyone. As she races around Toronto preparing for the funeral, she converses with herself (literally) and others about her feelings, while remembering good and not-so-good moments with her mother.

The Cassandras are not each a fixed point in time and space; while certain characteristic are displaed by one or the other, it’s anot an absolute. While Sadava might seem to be more in control and Nostbakken more volitile, there are shifts in how they behave and how they speak to each other and to others. The rebelious streak exists in each, as they confront family members, store clerks, sometime lovers, and their own internal conflict about how they should feel, and react, to her mother’s death.

As Cassandra weaves through the wintry Toronto streets on her trusty bike, trying to avoid streetcar tracks while gathering food and flowers for the service and working out what image of her mother the eulogy will present, the city becomes less familiar. This is common when the loss of a loved one happens; nothing will every be the same inside, so nothing is the same outside. This is punctured by Cassandra’s memories of Elaine, a woman who struggled with the sexism of her own time in pursuing a career, the way women are not invited back on a career track after they’ve had children, and how the pressure of having a daughter in the same line of work would both elate and exacerbate Elaine, with consequences for mother and daughter.

It’s no easy task to move a piece made for the stage to the screen, but Rozema, Nostbakken, and Sadava find a lyrical rhythm that makes it feels as it is was made to be filmed. The two actresses are obviously used to moving in such synchronicity that the moments when they move as one seem natural, and when they are apart and speaking to each other, almost unnatural. Rozema is sympathetic to both Cassandra and Elaine, but does not shy away from showing the negative as well, as the cold day and still night move into each other, and the city sits awaiting Cassandra’s final choice, as if then it will solidify into something in which she can exist without her mother.

An intimate film that takes its cue from the senses of touch and sight, and the memories these invoke and their lasting effect, Mouthpiece externalizes the internal conflict of grief, literally and metaphorically. With stellar performances by its lead actresses, it’s afilm that resonates with its anger and its love.

Do you feel this content is inappropriate or infringes upon your rights? Click here to report it, or see our DMCA policy.
Amy NostbakkenMouthpieceNorah SadavaPatricia RozemaTIFF 2018