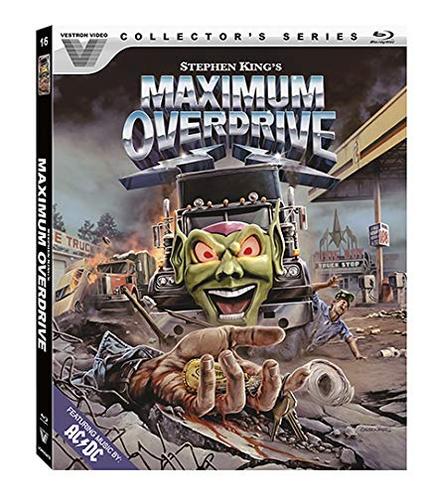 Fans of Stephen King's lone directorial effort (and what a mighty effort it was), Maximum Overdrive have reason to rejoice this October as this cocaine-fueled cult favorite lands on North American Blu-ray for the first time through Lionsgate's Vestron Video Collector's Series.

On October 23rd, Vestron Video will unleash this madness in high definition with an absurd number of supplemental features. Here is the press release from Vestron to give you an idea of what we are all in for:

Stephen King’s Horrifying Vision Arrives on
Blu-ray in the U.S. for the First Time Ever!
Get behind the wheel of one wild ride when the Vestron Video Collector’s Series releases Stephen King’s Maximum Overdrive on limited-edition Blu-ray™ on October 23 from Lionsgate. Written for the screen and directed by the original Master of Horror – Stephen King – this marks the first time ever that this horrifying film about sentient, homicidal machines has been released on Blu-ray in the U.S. Maximum Overdrive is loaded with all-new special features, including interviews with Producer Martha De Laurentiis and Special Make-Up Effects Creator Dean Gates; on-set vintage interviews with Stephen King, Emilio Estevez, and Laura Harrington; behind-the-scenes footage; and more! The Maximum Overdrive limited-edition Blu-ray will be available for the suggested retail price of $39.97.
OFFICIAL SYNOPSIS
Get ready for the ultimate battle of man vs. bloodthirsty machine in this terrifying Stephen King classic! For three horrifying days, the Earth passes through the tail of a mysterious comet. The skies glow an eerie green as humanity waits to see what the fallout will be. But what they imagine is nothing like the nightmare they find — the comet’s magnetic fields cause all the machines on Earth to suddenly come to life and terrorize their human creators in a horrific killing spree. Now, it’s up to a small group of people trapped in a desolate truck stop to defeat the killer machines — or be killed by them!
BLU-RAY SPECIAL FEATURES

This is one you won't want to miss! Check out the trailer below

Do you feel this content is inappropriate or infringes upon your rights? Click here to report it, or see our DMCA policy.
Stephen KingEmilio EstevezPat HingleLaura HarringtonYeardley SmithActionComedyHorror