Review: THE HAPPYTIME MURDERS; If You Think You're Going To Hate It, You're Probably Right 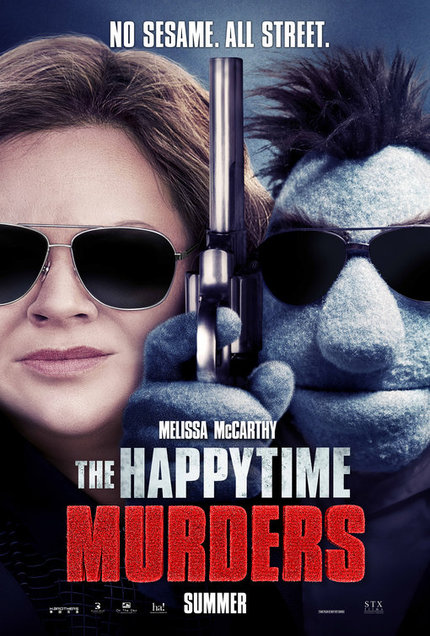 Well. As many issues as I may have with Brian Henson's The Happytime Murders, setting false expectations isn't one of them. The film, which has promised its audience "No Sesame, All Street" for months now, definitely delivers in the sense that it is as vulgar, as violent, and as depraved as it insisted it would be. If one acknowledges that, the only reasonable follow up is, "was it worth it?" In the case of The Happytime Murders, the answer really depends on the metric you choose.

Before we get too deep into the specifics, let me lay out the scene for you...

Blue puppet Phil Phillips (voiced by Muppet veteran Bill Baretta) is a hard boiled former police officer now working as a private dick. When a series of famous - and very successful - puppets start getting knocked off under suspicious circumstances, Phillips finds himself in the middle of an old fashioned film noir styled murder mystery. His human former police lieutenant (Leslie David Baker, best known from TV's The Office) recruits him to work with his former human partner, Edwards (Melissa McCarthy) to solve these high profile hit jobs, and as the bodies pile up, it becomes more and more clear that these deaths are connected. Now it's a race to find the thread that connects them all before it's too late.

A little bit Double Indemnity and a lot Meet the Feebles, The Happytime Murders surprisingly manages to bring nothing new to its vehicle of choice. Astute cult film fans will have already seen similar attempts at blending the intrinsically childish world of puppets with over-the-top vulgarity in films going back at least to 1976's infamous Let My Puppets Come, and more recently in the above mentioned Meet the Feebles from 1989, and on an even larger scale with 2004's Team America: World Police. The Happytime Murders attempts to leapfrog those efforts with a higher profile cast and bigger budget, but wastes too many opportunities to count in the effort.

The brainchild of Brian Henson, the son of Jim, The Happytime Murders is an attempt to launch a new, edgier branch of the Muppet-verse. Most fans of the original Muppets will be in their late 30's and beyond, and this is a clear attempt to capitalize on the nostalgia of those fans while appealing to their baser instincts. While it is largely unsuccessful in expanding the idea of what Muppets can be, I have to say it's probably going to be rather successful with fans expecting to see puppets get murdered on screen.

Is The Happytime Murders a bad film? For me, it was a let down. Which really says more about me than the film. I'm happy to see puppets under extreme duress, and I can't say I wasn't prepared for the film based on the promotional material, but the premise really wears out its novelty in the first twenty minutes or so, and the rest is largely just repeating the same gags. There are only so many ways to make a puppet head exploding into stuffing look exciting, and The Happytime Murders exhausts most of those options pretty early.

That's not to say that there aren't genuine laughs to be had, most of the opening sequence that establishes the struggles of an integrated human/puppet existence have a definite charm. Gags about puppets living in fear of pets who see them as living, breathing chew toys get some real laughs, as do some of the racier scenes of puppet coitus, but beyond that, it's all pretty much by the book puppet noir with a lot of really predictable jokes thrown in to pad the running time.

I cannot say that I hated The Happytime Murders, but I can say that if the trailers and promotional footage that featured puppets behaving badly had you in stitches, you'll probably have a great time. However, if those trailers - which seem to be everywhere - left you less than enthusiastic, you should probably trust your instincts. The Happytime Murders is a one joke film that runs out of laughs way too fast.

Do you feel this content is inappropriate or infringes upon your rights? Click here to report it, or see our DMCA policy.
Brian HensonJim HensonMelissa McCarthyMuppets

More about The Happytime Murders