Review: Puzzle is definitely worth solving in this low-key character study of womanly stagnation 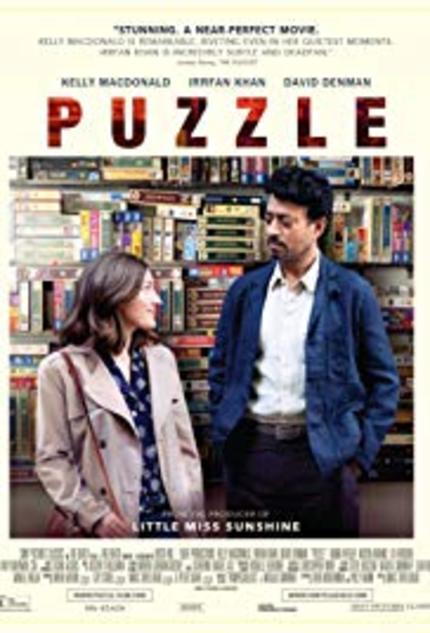 Puzzle may not be considered the juiciest of domestic dramas to capture one's instant curiosity based on its seemingly stillborn foundation of quiet alienation from the perspective of a middle-aged woman's emotional awakening. Still, director-producer Marc Turtletaub's earnest exploration into the unfulfilled psyche of a working housewife's stagnation feels inherently intriguing than what most moviegoers will probably give him credit for based on his creative approach. Sure, Puzzle will probably be a tough sell to present as stimulating film fodder in the dog days of summer bombarded by flashy superheroes, showboating spies/secret agents, colorful explosions, and high-octane car crashes. Nevertheless, Turtlebaub (producing credits include "3 Generations", "Loving") assembles a charming, insightful and probing feminist character study that is uniquely mentally fortifying in conception.

Combining the trappings of domestic doldrums coupled with competitive jigsaw-puzzling is not exactly an instant gratification of titillating exposition but Turtlebaub's skillful and tactical approach to breathing life into this underlying surface of angst and self-worth is a challenging and contemplative piece of cinema. Solid, introspective acting provided by Kelly Macdonald as the soft-spoken womanly wonder that discovers her empowerment through an unexpecting skill is a winning, cerebral showcase saddled in spirit and soul.  This small-scale drama literally pieces together this constructive Puzzle as an unconventional midlife crisis profile of a low-key adventurous female looking for more in her current malaise.

Screenwriter Oren Moverman ("The Dinner", "Junction 48") serves up a quiet yet perceptive commentary on the indelible mark of an individual looking for validation in her existence. Agnes Mata Oros (Macdonald, "Goodbye Christopher Robin", "T2 Trainspotting") is a New England-based 40-something wife and mother of two adult children. Remarkably, Agnes is stretched thin as a dutiful caretaker. She loves her role as the woman of the household but somehow yearns for more outside of her domesticated duties. Understandably, Agnes wants to grow--actually she needs to grow beyond her role of taking care of others. She must find purpose or at least a source of escapism to free her from the ritualistic housework agenda. Agnes is surrounded by testosterone as she has always been exposed to males (her spouse, sons, father, etc.) that contributed to her confinement within her immigrant-oriented bedroom community.

Interestingly, Agnes is set to acknowledge her birthday but her hubby and sons are not expected to lift a finger and prepare for her special day. In fact, Agnes is tasked with presiding over her own birthday party. What soon changes Agnes for the better is when she receives a tricky 1,000-piece jigsaw puzzle as a birthday gift. Curiously, she takes an instant liking to the massive puzzle much like a thirsty fish takes to clear water. Agnes pieces the puzzle together in record time then takes it apart only to repeat this same resourceful feat of accomplishment. So what do you know...Agnes is hooked on her puzzle-solving prowess. However, hubby Louie (David Denham formerly from TV's "The Office") is not too pleased or impressed with his wife's newfound hobby that is unleashing her masterful capabilities.

Inevitably, Agnes's fixation and obvious talent for solving complex puzzles become her primary goal to satisfy her empty-minded expectations. Sadly, she has not traveled very extensively outside of her small town Connecticut community. This, of course, will change as Agnes's strong need to pursue her puzzle-related dreams will eventually come into fruition. Bound for New York City to take her puzzle-solving urges to the next level Agnes stumbles across a notification for entry into a heralded puzzle competition. This is certainly an appetizing advantage in which to follow up and commit with noted enthusiasm.

Enter Robert (Irrfan Khan, "Kaarwan", "The Song of Scorpions"). Agnes is privileged to meet Robert's acquaintance as it benefits her circumstances regarding the upcoming competition. It is safe to say that Robert would be the first man in her life to be on her same wavelength in interest and psychological security. You see, Robert is a wealthy inventor and avid puzzle master blessed with the same aptitude and brilliance for solving jigsaws in impressive fashion. Coincidentally, Robert happened to be in search of a capable partner to join him in the puzzle competition. Thus, a determined duo is born and to be reckoned with as they seek out the competitive spirit in conquering whatever head-scratching puzzle pieces are put before them in unraveled fashion.

Incidentally, Puzzle is based upon the 2009 Argentinian comedy Rompecabezas. Turtletaub's pacing is methodically spotty in some instances but that certainly does not undermine this promising narrative's allure in terms of the authentic and structured performances. In particular, Macdonald's Agnes is compellingly pensive and convincing as the sheltered homebody looking for avenues of reassurance, release, and enlightenment. The film has a breezy scope that shines a proverbial light on a refreshingly different kind of female empowerment that tiptoes into gentle territories of neglect and uncertainty. Macdonald's Agnes is genuinely relatable and to see her break out of her shell and engage in something so concentrated that exposes a hidden confidence she did not realize existed feels justifiably complete.

Thoroughly simplistic and profound, Puzzle is a poignant and insightful character study of domestic alienation looking to take some time off for poetic evaluation. Needless to say the jigsaw pieces of emotional heft fits admirably in this soul-searching showcase.