Review: Far From the Tree examines the familial frustrations set against the loving landscape of adversity 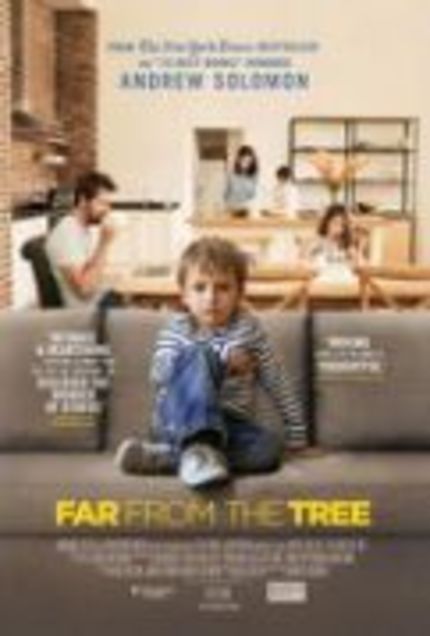 Director Rachel Dretzin's winning documentary Far From the Tree is a challenging, uplifting and absorbing observation into the indelible mindset of the family structure--mainly concentrating on the emotional and psychological dynamics of familial relationships and how the disconnection of parents and their "unique" offspring cope with existing obstacles. Wonderfully contemplative, sensitive, eye-opening and impactful Far From the Tree skillfully delves into the contrasting theory that "the apple doesn't fall far from the tree" sentiment to reflect how parents and their children are one in the same is not always necessarily the case. Dretzin's comprehensive 93-minute narrative sets out to reveal its subject matter's truths that they live under the umbrella of love, affection, frustration, disillusionment, cynicism, hope and the conquering of human heartache. Thoroughly gripping in warmth and insight, Far From the Tree engages its audience effectively with tenderness, tenacity, and high-spiritedness.

Dretzin's inspiration for her well-rounded touching exposition is based on seasoned journalist/psychology professor Andrew Solomon's massive 2012 nonfiction best-selling book Far From the Tree: Parents, Children and the Search for Identity. Solomon's topical expertise certainly hits home for the noted scholar and author whose homosexuality was a major source of contention for his own straight mother that did not understand his need to deviate from "normalcy". In fact, Solomon's voice of personal perspective is expressed deeply in Dretzin's compelling story as both a co-producer and talking head in the documentary.

Far From the Tree serves as a liberating vehicle for every maligned child of difference (sexual orientation, dwarfism, lawbreaker, disabled, medically vulnerable, etc.) that had to find acceptance and support from their parents feeling guilty, detached, uninformed or mystified by their offspring's unconventionality. Solomon had devoted his time and energy to researching and writing on the probing effects of clashing ideologies and other obstacles that had placed a life-changing wedge between the straight-laced parents with the high expectations for their children and the children that defied those high expectations courtesy of their non-traditional makeup. The revelations are truly felt as the parents--suffering in grief, disappointment, denial, and confusion--show difficulty swallowing the hard pill that their own flesh and blood cannot accept conformity. As disarming as Far From the Tree appears to be at heart, one can certainly find sympathy for the troubled families showcased under Dretzin's perceptive microscope.

Although Solomon's lengthy, in-depth tome provided countless stories of families struggling with fundamental differences and the coping mechanisms needed to overcome the bewilderment on both sides of the coin, Dretzin works wonders with the handful of selected broken parents and children dealing with their heart-breaking realities. The case studies presented are a mixed bag of descriptive dilemmas--some dealt with the approach of compassion and determination while others approach the territory of gentle indignation and ambivalence. Whatever existing residue of doubt and despair is realized the bottom line is that Dretzin's cinematic take wants to embrace the mantle of mutual acceptance. Indeed, the stage is set for mending all the loose ends of uncertainty and underlying disapproval. Naturally, the healing process between the devastated parent and wounded child demonstrate varying degrees of tolerance. Ultimately, the sense of self-worth and purpose for some of the "normal-deprived" children can still shine through despite the reservations or indifference of societal pressures.

The candid self-examinations of these vastly misunderstood children from the past and present are predicated on the telling life experiences highlighted by elements of sadness, joy, liberation, and the sensibilities or reinforcement of parental support/indifference. The highly accomplished Solomon, for instance, offers some reminiscences of his jeopardized growing pains when recalling how his so-called youthful weirdness and unnatural preferences alarmed his befuddled parents to the point that they disowned him downright. Still, the gamut of questionable parenting is represented with its share of highs and lows--some caretakers were comforting and conscientious in their child's eccentric upbringing while others were simply too hurt and outraged to co-sign their child's erratic behavior and perceived oddities.

Other self-discovering stories include autistic teen Jack Allnut and his defeated parents that somehow managed to confront their son's physical and mental/anger issues with a combination of patience and helplessness while questioning what more they could do for their ailing child. Poor Jack feels like a stranger to both his imprisoned, weakened body and to his caring folks. The end result is positive: Jack ends up communicating and improving his social skills while making great grades in school. The horrific account of privileged 16-year old Trevor Reese, whose criminal act in the throat-slashing of an 8-year old resulted in him serving a life sentence for his demented deed. Trevor's mother walks the fine line between openly acknowledging his jailed existence and shielding others from his deadly wrong-doing and dutifully receiving calls from her convict son at the jailhouse. As a reminder, Trevor's conflicted mother quips that she loves him unconditionally despite the immense trauma that he has corrosively caused for all involved.

Parents Emily and Charles Kingsley routinely rejected the notion that their Downs syndrome-stricken son Jason would not be able to survive the rigors of his severe medical condition upon the suggestion from the doomsday doctors recommending him being institutionalized. Thankfully, the Kingsleys believed in Jason's ability to overcome his physical restrictions and become independent as an adult. Jason's folks had the faith in him and it eventually paid off--he now resides peacefully with friends that share his Downs syndrome infliction.  Meanwhile, Dretzin focuses her attention on the Little People of America forum where activists gather to debate the belief that dwarfism is a medical concern and needs a cure. The protesters argue that their short stature should not be considered an abnormality in the least. The lively convention links the engaging little people couple Leah Smith and Joseph Stramando as their childbirth journey include wondering if their beloved bundle of joy would inherit their shortened physicality and if so...that would be fine by their accepting standards.

Convincingly introspective and empathetic, Far From the Tree is blessed with putting forth the trials and tribulations of the family foundation mired in complexity, adversity, curiosity, commitment, loyalty, and vulnerability. There is not a manipulative tone to Dretzin's exposition because the individuals are exposed honestly and their flaws are genuine and relatable to those that have known such heartbreak and yes...sometimes human triumph. Undeniably inspirational and graced with dignity, the branches of pressured parenthood is firmly extended from the soul-searching documentary Far From the Tree.

Do you feel this content is inappropriate or infringes upon your rights? Click here to report it, or see our DMCA policy.
adversityAndrew SolomonfamilyFar From the Treemovie adaptationRachel Dretzin