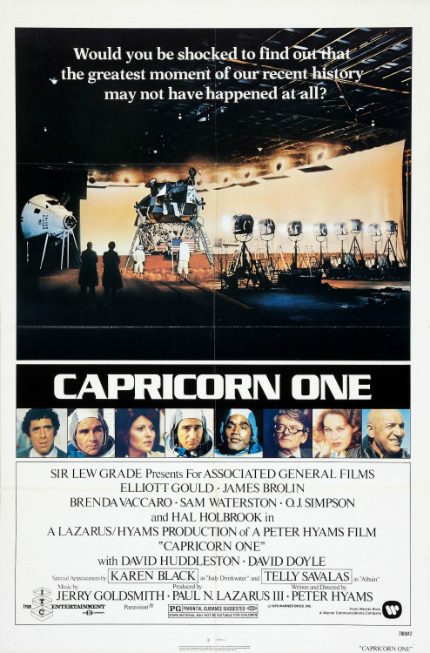 "A funny thing happened on the way to Mars."

In our current era, in which the term 'fake news' is hurled as an insult, without rhyme or reason or evidence, it's fascinating to rewind to 1978 and watch Capricorn One, based on the idea of an outrageous fake news story.

(The film is available to stream via FilmStruck, which is how I watched it, and also Amazon Prime.)

"I'd been germinating this idea for some time," filmmaker Peter Hyams told Empire in 2014. "Whenever there was something on the news about a space shuttle, they would cut to a studio in St. Louis where there was a simulation of what was going on. I grew up in the generation where my parents basically believed if it was in the newspaper it was true. That turned out to be bullshit.

"My generation was brought up to believe television was true, and that was bullshit too. So I was watching these simulations and I wondered what would happen if someone faked a whole story." Reaction wasn't what he expected, however. "I wrote the script and took it around. ... The reaction was, 'Get your car out of the parking lot!' It kind of baffled me and I put it aside for a few years."

Hyams was educated in the arts and "became consumed by photography," as he told interviewer Luke Ford in 2002. He had already begun writing: "Not well, just prodigiously. ... I knew that I wanted to combine imagery with writing and relevance." After spending six years in television journalism, he left his job with CBS News and wrote a script -- which sold!

That was the drama T.R. Baskin in 1971, which he also produced; Herbert Ross directed. Later, Hyams described himself as a writer "who didn't want to write for anyone else," which led him to televison. He directed his own teleplay for the crime comedy Goodnight, My Love, which earned him a lot of interest in Hollywood.

He made his feature debut with the crime comedy Busting in 1974, which he also wrote. After directing two more films based on scripts by others (romantic comedy Our Time and mystery comedy Peeper), Hyams was finally offered the opportunity to direct his own, original Capricorn One script.

It's a triumph, a film that stars James Brolin, Sam Waterston and O.J. Simpson (?!) as U.S. astronauts who are pulled from the first mission to Mars moments before their rocket is set to launch. The rocket takes off without them and the world watches, transfixed.

Mission director Hal Holbrook arrives shortly thereafter, a rock-steady presence of steely confidence, and confesses to the bewildered astronauts that something went wrong in the construction of the rocket, which would have caused a long delay in the mission and likely lead to N.A.S.A. losing most, if not all, its funding. And that would not be good for mankind!

Or so Holbrook implies. And so he and a few other trusted collaborators cooked up the fake news story that all is well and the rocket to Mars launched successfully with the men aboard. Now all the astronauts need to do is sit around, occasionally make fake broadcasts home to their families, and pretend everything went according to plan after the mission. If they don't agree, well ... their families are all traveling on the same plane at the moment, and something might happen to the plane ...

It's an outrageous premise, but it's constructed marvelously by Hyams, first in his script and then in his direction, which always hits the right notes. Somehow, it's a breezy, ridiculous adventure, yet also one that is always believable, bolstered by terrific performances by Brolin (the leader), Waterston (the comic relief) and Holbrook (the bureaucratic villain), as well as Elliott Gould, who plays a suspicious journalist.

The supporting cast is enlivened by Brenda Vaccaro (as Brolin's loyal, supportive wife), the great Robert Walden (as a suspicious government employee), Karen Black (as a witty journalist who spars with Gould), David Huddleston (as a suspicious politician), James Karen (as the U.S. vice president) David Doyle (as the boss you love to hate), and Telly Savalas (as *spoiler!*).

I'm very sorry I never watched the film when it opened in June 1978, because it was (and is now) right up my alley, a smart thriller that gets even better as it goes, leading up to a truly spectacular action sequence. As with all outrageous premises, it requires a suspension of disbelief, which I wasn't willing to give to a movie I thought was summed up in its premise.

(That same summer, I enjoyed The Buddy Holly Story and Heaven Can Wait, while Thank God It's Friday, Foul Play, Grease and Jaws 2 did nothing for me. I was very dismissive during that time.)

Nonetheless, people other than me did see the movie in theaters. Hyams recalls: "Audiences just stood up and cheered at one point in the film. It wasn't because it was such a great movie, it's just that certain movies strike certain chords with people. In a successful movie, the audience, almost before they see it, know they're going to like it.

"I remember standing in the back of the theater and crying because I knew that something had changed in my life. Sitting on the film cans outside the screening room, I felt my cheeks were wet with tears. A bright man, [studio executive] David Picker came over to me and said, 'You're going to have a lot of new best friends tomorrow. You better know how to handle it.' And I was at home the next morning at eight o'clock when the phone rang. And the guy was talking without saying who it was. It was the guy who hadn't returned my phone calls in two years."

Watching Capricorn One made me realize that I'd been unduly influenced by suffering through A Sound of Thunder in a theater back in 2005. (Financing got cut severely at the last moment, so it looks simpy awful.) So at a time when I should have been catching up on all his films that I'd missed seeing ... I didn't.

But, before End of Days becomes a reality, there's still a chance for me to get up to date on Peter Hyams. And to share the triumph of Capricorn One.

70s Rewind enables the writer to explore and ruminate on his favorite film decade. 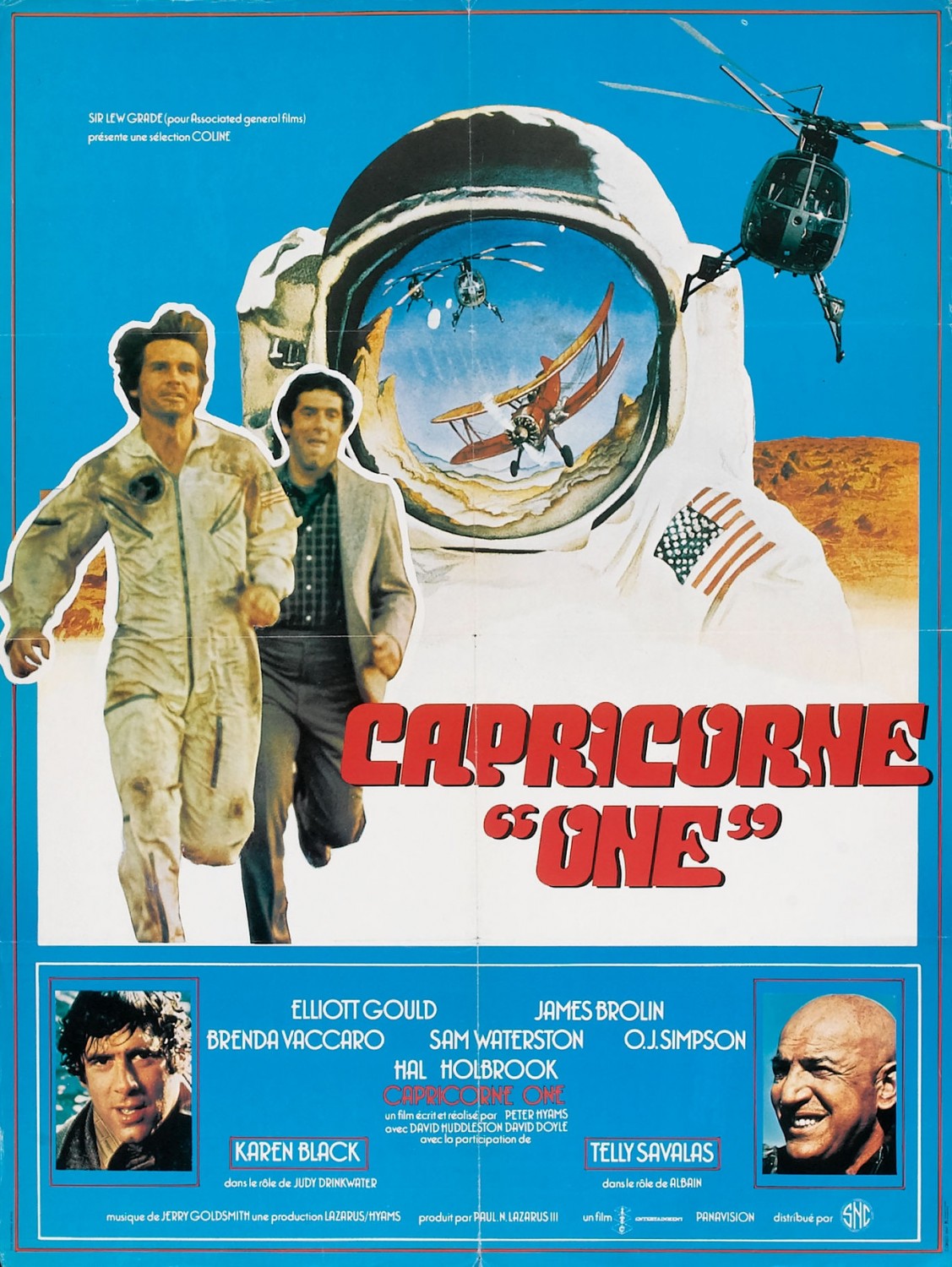 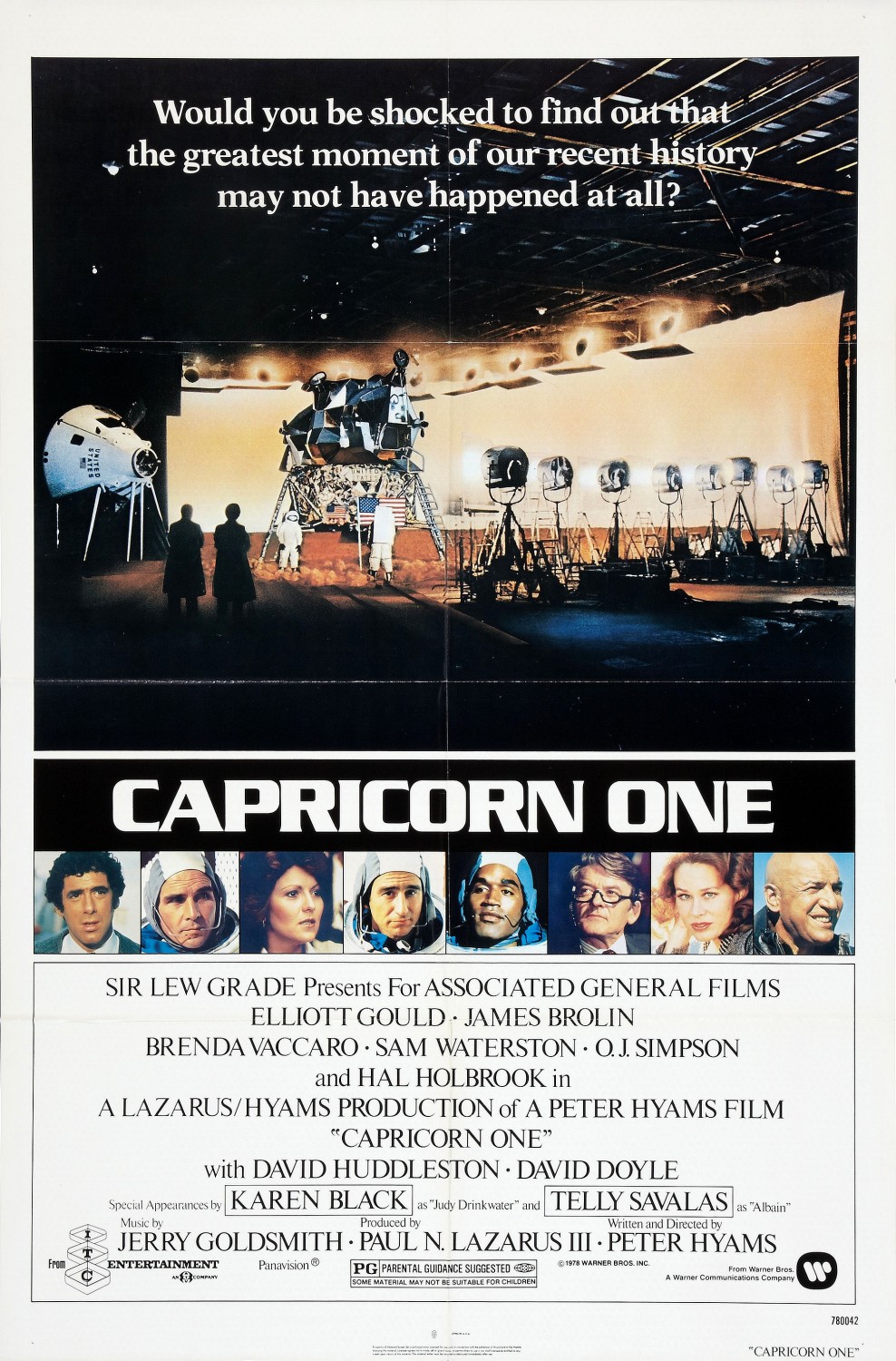 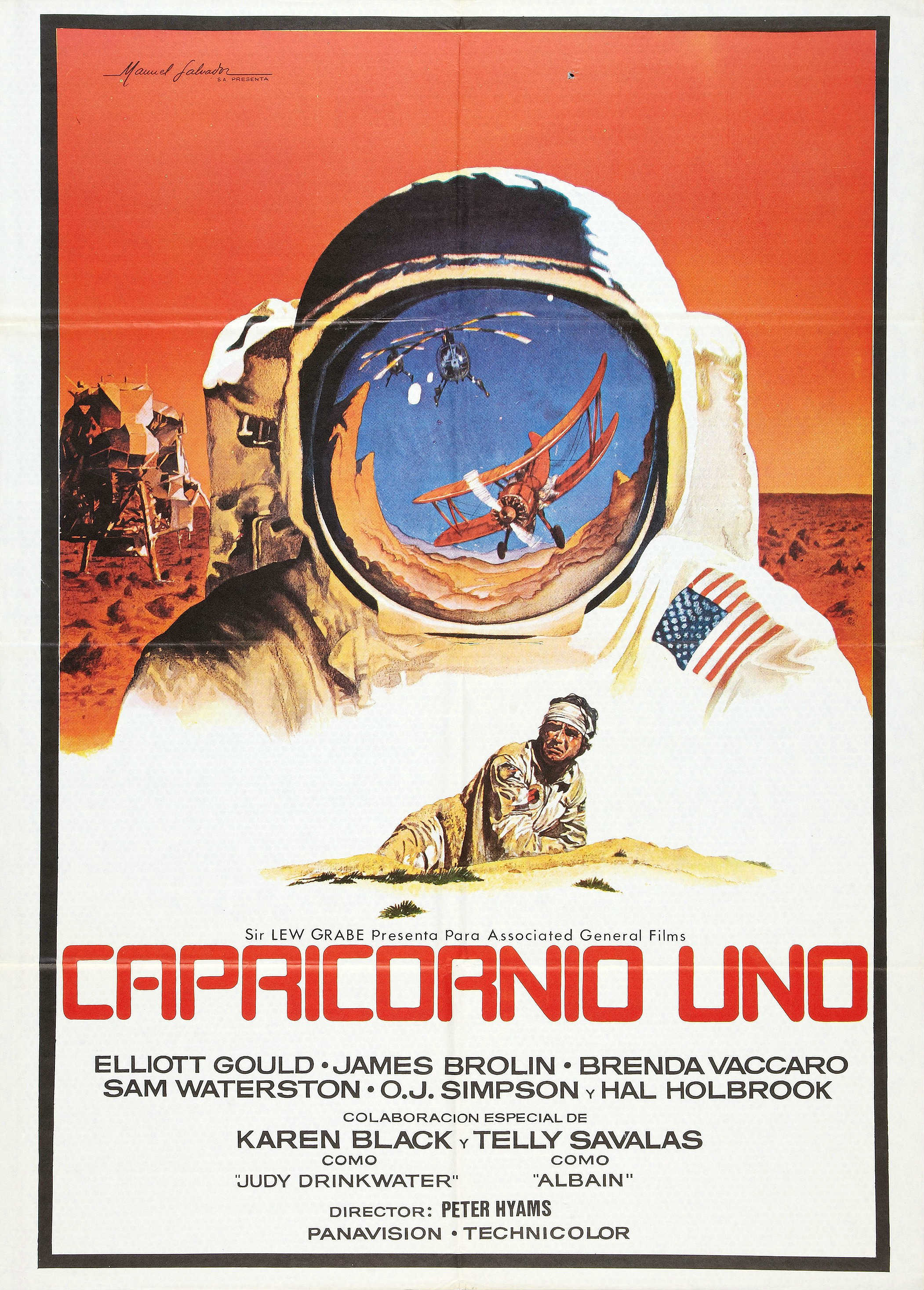 Do you feel this content is inappropriate or infringes upon your rights? Click here to report it, or see our DMCA policy.
70s RewindHal HolbrookJames BrolinOJ SimpsonPeter HyamsSam Waterston