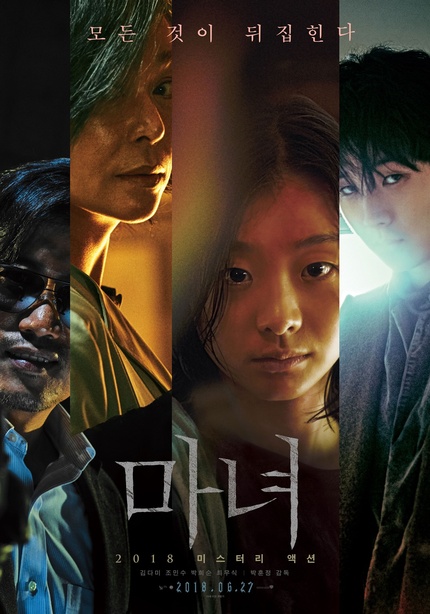 We join director Park Hoon-jung's The Witch: Part 1. The Subversion in the middle of a massacre. The bloody corpses of children litter the ground in what appears to be a medical facility/prison in a cleansing at the behest of a female overseer and her male subordinate. However, there are a couple of kids that just won't go down easily, and they are, of course, the most important of them all. One, a young boy, is retrieved, but the other, a young girl, takes off into the woods and escapes to a remote country house where she is adopted by an elderly couple and raised as their own.

Ten years pass, and young Koo Ja-yoon (Kim Da-mi) built a new life as an average kid, seemingly harboring no memories of her violent past. However, when she decides to audition for a Korean star search show and accidentally live broadcasts some rather usual abilities to the country, her former captors find her and come after her. So begins a very intricate tale of violence and revenge that bears all the hallmarks of the best of Korean revenge thrillers, with a few newish tricks thrown in.

Westerners will probably know Park Hoon-jung best as the writer of Kim Jee-woon's controversial serial killer thriller, I Saw the Devil, however, that's just one of a number of films with Park's unique stamp on the poetry of violence. He also wrote and directed Choi Min-sik's 2015's The Tiger, and 2013's incredible gangster film, The New World. This newest project sees Park adding science fiction to his already impressive resume, and the results are awesome.

Existing somewhere at the intersection of the Bourne films and X-Men, The Witch is an intense experience that introduces some interesting new characters to the lexicon of Korean action cinema. Koo Ya-joon not only has some telekinetic abilities, but also fights like a demon, and when faced with other like herself, we get a delightful explosion of ultra-violence that leaves screen the soaked in blood and littered with broken bones. Koreans are no strangers to on screen violence, but I don't think I've seen it expressed in quite this way before, and it's exciting. Imagine an R-rated, grittier X-Men, and you'll get the idea. Only this time, the writing and acting are top notch.

The cinematography by Kim Young-ho and Lee Teo is amazing, and really sells the top notch action choreography once the film makes its dramatic switch from witch hunt to action movie. The music and sound design also play a huge part in setting the tone. We're punched in the chest by a pounding, propulsive score by Mowg, and the sound design of the action sequences really allows the audience to take the punches with Koo.

Kim Da-mi's performance in the lead is effective and creepy. She's asked to transform from a timid school girl to a raving maniac, hell-bent on vengeance, and handles both ends of the emotional spectrum very effectively. Kim also manages the action well, though I feel like most of that was done by teh camera, since so much of it is exaggerated FX. Her antagonists, Professor Baek (Cho Min-soon) and the bitter security guard Mr. Choi (Park Hee-soon), provide convincing menace and give Kim something solid to bounce off of. There is a best friend character, Myung-hee (Ko Min-shi) whose presence seems wholly unnecessary, but it's a small thing in the larger scheme, and mostly forgivable.

At two hours and five minutes, The Witch isn't particularly long for this flavor of Korean action film, but given that it's set up as the first part of a story, it does feel as though they could've trimmed a bit from the set up. It takes its sweet time getting in motion, but when it does, The Witch: Part 1. The Subversion - a bit of an unwieldy title, if you ask me - is a hell of a lot of fun and will both satisfy Korean action fans looking for something different, and leave them desperate for more.

The Witch: Part 1 - The Subversion

More about The Witch Part 1. The Subversion