Scottish director John McPhail finally got to bring his Christmas zombie musical home when he arrived at Edinburgh International Film Festival for the film’s UK Premiere. The film had already built positive festival buzz after triumphant screenings at Fantastic Fest in the US and Spain’s Sitges Film Festival, but there’s no place like home and the director had the cast along to share the joy at the Scotland screenings. (The film also plays its Canadian premiere today, Wednesday, July 25, at 6:25pm at Fantasia.)

Anna and the Apocalypse follows teenage schoolgirl of the title, Anna, as she dreams of life after leaving her small Scottish town. Unfortunately, getting away may not be a simple case of getting through the school Christmas concert and finishing the term, as Anna and her best friend John wake one morning to discover a full-blown zombie apocalypse taking place on their doorstep.  Comic zombie carnage combines with joyous musical numbers in a hugely entertaining mixed genre package that comes wrapped in a Christmas bow.

While at Edinburgh, the director took time out to talk about his love of zombies, his new passion for musicals and the joys of Christmas…

The film had its World Premiere at Fantastic Fest in Austin Texas last year, what’s been the reaction of the hometown audience here in Edinburgh and how does it compare?

It’s been brilliant, absolutely brilliant; everybody’s been so supportive. The first screening went really well, there are certain jokes in there that are very Scottish and it’s really nice to hear them coming off. There was a bit of a difference especially in the first screening at Fantastic Fest, and then at Sitges, because the audience are just nuts, they’re all up shouting and whooping and clapping. The UK are usually more reserved, but the screening last night was mental, people were cheering and clapping, so it was nice to get that reaction from the home audience. But a late night screening, Filmhouse 1, a lot of alcohol… yeah it was brilliant.

The film developed from Ryan McHenry’s musical, at what point did you come on board, what was your relationship with Ryan and how did it develop into the feature that it became?

Unfortunately, I didn't get to meet Ryan, he passed away before we actually met, which is unfortunate because Haphazard media, which was what Blazing Griffin (the production company) used to be, we had a few friends shooting with them and then they had some shooting with us, so we knew of each other but never got to connect. It wasn’t until the boys Nicholas Crum and Naysun Alae-Carew (Anna and the Apocalypse producers) saw my micro-budget feature Where do we Go From Here at the Glasgow Film Festival, they’d been on the hunt for horror directors and musically minded people and they couldn’t find that balance and then they saw my feature which is a romantic comedy coming-of-age film and that's what they saw and wanted for Anna.

So your background was more in the romantic comedy drama area than the horror genre field that Anna might perhaps appeal to?

I never went out to make romantic comedies, it was really strange, I’m not the biggest romantic comedy fan in the world it was just the story that I really wanted to write about. I must be a romantic at heart. And it was just what worked, and I made a few short films, two were romantic comedies and one was a dark comedy and the romantic ones seemed to sit well with us and we stuck with that for our first feature. But I’m a massive horror fan, a massive horror fan. I grew up watching John Carpenter and Sam Raimi and Peter Jackson movies, Wes Craven movies. So I always wanted to do horror, in fact I was writing one and I was really terrified about it, because like I say, it’s my favourite genre and I didn't want to ruin it. I didn’t want to be bad at making one!

You don’t know how may times I tried to get people that Blu-ray! When the papers first got wind of the story of the film, a zombie musical, everybody was saying it's the first zombie musical and I came in to the office and said, “Just so you know, here’s the first zombie musical, and here’s the Blu-ray” and nobody touched it. Actually, no, that’s a lie, my graphics guy watched it because he made a poster for me and it’s in the background at the very beginning, There’s a poster of the Happiness of the Katakaris. I’m a massive Takashi Miike fan.

What were the other zombie movies you looked at that you tried to bring into this film?

I’m a big Evil Dead fan, so the hand coming out of the ball pit, that’s a reference there. John Carpenter. Of course I watched all three George Romero movies plus the Zack Snyder remake, I watched Land of the Dead and realised how much I hated it! Zombie Flesh Eaters… it’s one of those ones that there’s so many categories of zombies that I could make up my own rules. It’s Christmas time so instead of being grey I put colour in their faces, put some yellow in their faces so it's a bit more jaundiced, more of an infection. But yeah, I watched loads of zombie movies. I love zombie movies anyway, so there are a few references in there. A few people came up to me and were like “Aww, I loved your Evil Dead reference which was nice. There’s also a reference to Gregory’s Girl, it's the penguins, and a couple of people came up to me and said, “Did you put the penguins in there for Gregory’s Girl? And that was Alan who wrote the feature, that was his little reference to a Scottish film.

The film wouldn’t have worked as well as it did if the songs weren’t so good, could you talk a little bit about the musical side of the film?

The music was done by Tommy Reilly and Roddy Heart and working with them has been an absolute dream, I’m just so proud of them. When I came on board there was 6 or 7 songs. Some of them we carried forward and others were completely changed and some we added as we went. Alan had done in the script with the rough ideas of songs, rough lyrics and we'd go back in and change things. We wanted to have a plan there, we never wanted to be just like, “Oh it’s 15-minutes without a tune, we'd better break into a song.” We always wanted each song to carry the story forward or give the character back-story. When I first came in I didn't know the boys that well and I’m not the biggest musical person, I’d have to be dragged to a musical kicking and screaming. So I set up what was called Friday Music Club, where every Friday me and Roddy and Tommy we’d get together and just sit and talk about our influences and what kind of music we liked, and scenes and the tones we were trying to get across. And it was brilliant, they were great, when you’re talking to really talented musicians and you’re trying to articulate yourself it’s difficult but they seemed to get me. I learned a lot from them and I watched so many musicals, like I love West Side Story, I dig Moulin Rouge, I watched Rent as well. I saw Wicked live and Legally Blonde live and they were great, but honestly I tried to watch High School Musical but after 10-minutes I had to turn it off, Pitch perfect 1 and 2 I was fine with, but High School Musical I just couldn’t do it. It was just so cheesy, I couldn't get into the characters at all.

So the third part of this genre-mash up is that it’s a Christmas movie. Did you have ambitions to make an alternative Christmas classic?

When I came on board it was already set at Christmas that came from Ryan McHenry. Alan and Ryan had decided for a while the high school zombie musical thing, and Ryan had just came in one day and said to Alan, “Let’s set it at Christmas” and they loved the idea. I like Christmas as much as anybody but my mother she starts playing Christmas songs in October and the decorations come out so this was a really good opportunity for me to get my frustrations out on Christmas. Set Christmas trees on fire, kill Santa Claus, lop off Frosty’s head! But Tommy Reilly is the biggest Christmas fan, he just loves Christmas. When we were at Fantastic Fest we were doing a Q&A and you could feel the audiences heart breaking when he was stood there going “I just love Christmas, it makes your dreams come true”. So yeah, every Christmas I watch Gremlins and Die Hard without fail and I would love for this to be this generation’s Gremlins, not the traditional Christmas movie.

Well it’s played here in summer on what’s possibly the hottest day in Scotland ever… is it ever going to get a Chirstmas release?

It looks like it’s going to come out in November in the UK. We’re working on getting the date sorted but the end of November is the plan for the release. 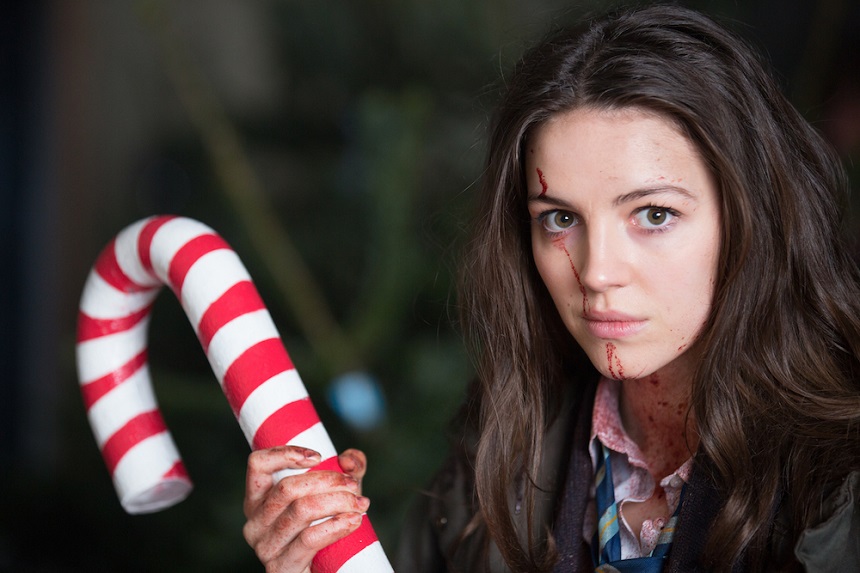