Review: ANT-MAN AND THE WASP, Fun With Sizes in a Superhero Sequel 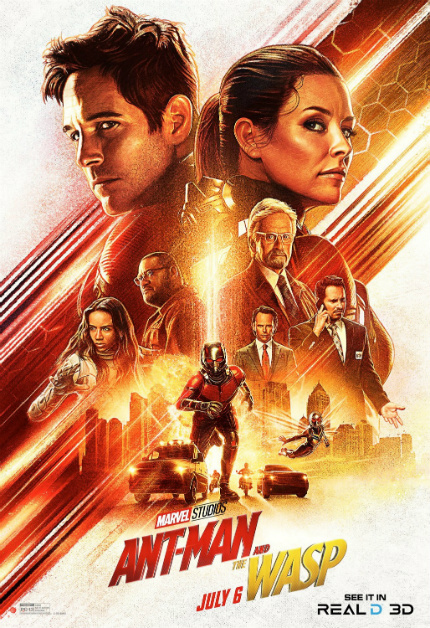 If only Edgar Wright had directed Ant-Man ... Periodically, that thought popped into my brain while I was watching Ant-Man and the Wasp, Peyton Reed's altogether pleasant, if cookie-cutter adventure.

Ant-Man and the Wasp is easy to watch. Eager to please with jokes aplenty, it's very much a movie that prides itself on its positive tone. Scott Lang (Paul Rudd) still loves his young daughter Cassie (Abby Ryder Fortson) more than anything, gets along even better with his ex-wife Maggie (Judy Greer) and her new, very loving husband Paxton (Bobby Cannavale).

He still maintains a cordial relationship with S.H.I.E.L.D. agent Jimmy Woo (Randall Park), which comes in handy, since Scott is on house arrest for his actions in Captain America: Civil War, which estranged him from Hope Van Dyne (Evangeline Lilly) and her father Hank Pym (Michael Douglas). Hank and Hope are fine with that, since they've been busy on a project to rescue Janet Van Dyne (Michelle Pfeiffer), who disappeared into the Quantum Realm some 30 years before.

The final device that Hank and Hope need to complete their rescue mission is in the hands of the mercenary Sonny Burch (Walton Goggins), who is protected by an improbably large group of silent bodyguards. Sonny, who must have read the entire screenplay in advance, somehow knows exactly what Hank and Hope are planning and wants in ... for a cut of the profits, of course.

Credited to five writers -- Chris McKenna, Erik Sommers, Paul Rudd, Andrew Barrer, Gabriel Ferrer -- the screenplay calls to mind Blazing Saddles, which also had five credited screenwriters. It's a loose assemblage of scenes in a comic adventure that serves, in effect, as a very expensive interlude between Captain America: Civil War and Avengers: Infinity War, except, of course, that it's released after the latter film, which highlights the unnecessary nature of the whole thing.

That's not to unduly or unfairly criticize Ant-Man and the Wasp, however. As noted, it's fine and zippy and moves, constantly, almost like the magic card tricks that are introduced early and remain a touching point, a reminder that this is one joke that is not to be taken too seriously.

Even so, I can't yelp yearning for what Ant-Man might have been if Edgar Wright had directed it. Might he have reached the heights of Taika Waititi's Thor: Ragnarok?

Instead, we have a sequel directed by the perfectly serviceable and no doubt hard-working Peyton Reed, who chops up every single scene into easily-digestible bits that make it easy to forget you're watching a movie that is, predominantly, fascinated by having fun with the size of its superhero.

The film will open in theaters throughout the world shortly; it opens in U.S. theaters on Friday, July 6.

Do you feel this content is inappropriate or infringes upon your rights? Click here to report it, or see our DMCA policy.
Ant-ManEvangeline LillyMarvelMichael DouglasPaul RuddPeyton Reed