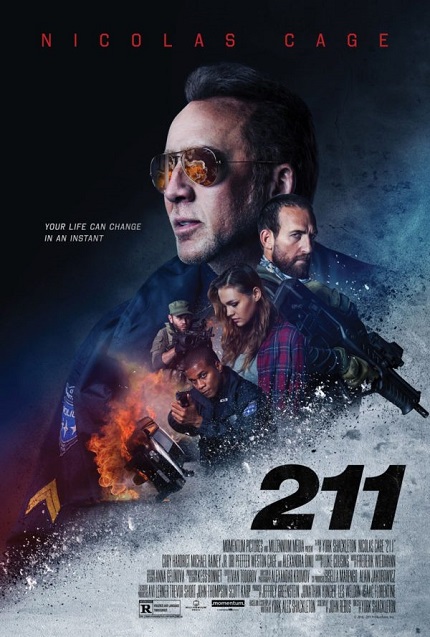 The Law of Cage states that for every good movie he makes, Nicolas Cage must then act in four or five bad ones. Now that Brian Taylor’s insane Mom & Dad and Panos Cosmatos’ festival favorite Mandy have gotten good notices, it means that the hairpiece-abusing Nic is due for some duds soon. 211, from director York Alec Shackleton, is thankfully not a massive fail, but it’s still definitely low-level Cage.

Based on a real incident known as the Battle of North Hollywood – a prolonged shootout between police and armed robbers that ended with high casualties and millions’ worth of property damage – the film casts Cage as Officer Mike Chandler, who, during a routine patrol with a ride along, gets caught in a standoff between his colleagues and a gang of heavily armed mercenaries who have stormed an Everytown, USA bank. (One of said mercs is played by Nic’s son Weston, leading to an odd scene where Cage Jr. tries to shoot Dad with a sniper rifle.)

It’s a barebones plot, and the movie’s 86 minutes reflect this, with an extended prologue set in Afghanistan apparently here to pad out the running time. It takes a while for the firefight to begin; once it does, Shackleton opts for realism, with Heat being the obvious model, what with the loud heavy-duty firepower and open warfare on the streets.

These sequences are sporadically compelling, but the realism is completely shot down by the inclusion of some obviously fictional, clichéd subplots: there’s the cop on the verge of retirement, the younger partner with a baby on the way, and the civilian, a wide-eyed kid played by Michael Rainey Jr. and who’s here for some obvious, halfhearted commentary on police racism.

As for everyone’s favorite Coppola, Nic Cage is actually more of a supporting part (he’s seen for about 30 seconds in the first 20 minutes), doesn’t really have a whole lot to do once the gunfight winds down and SWAT enters the fray, and, aside from a quick moment of patented Cage Rage (which is more due to PTSD for his character than any of his usual tics), he plays his role low-key, taking the material seriously, which means he wants you to do the same.

And that’s a shame; 211 could have used some of the actor’s special brand of bug-nuts craziness. It would have considerably livened up what is a barebones action movie that moves quickly and doesn’t do much other than present some competent but unexceptional gunfights. In the end, despite some promising source material, this is yet another footnote in Nicolas Cage’s increasingly more unpredictable late-period career, which swings wildly between DTV programmers like this one and the occasional acting job in movies from respectable directors, like the Sion Sono project he’s got lined up. With four other projects this year, he’s due for another good one soon, right? It’s the Law of Cage, after all.

211 will be released in theaters and on VOD and Digital HD on 8 June via Momentum Pictures.

Do you feel this content is inappropriate or infringes upon your rights? Click here to report it, or see our DMCA policy.
211Nicolas CageYork Alec Shackleton