London Indian 2018 Review: UP, DOWN, & SIDEWAYS, The Song Of Nagaland Fascinates 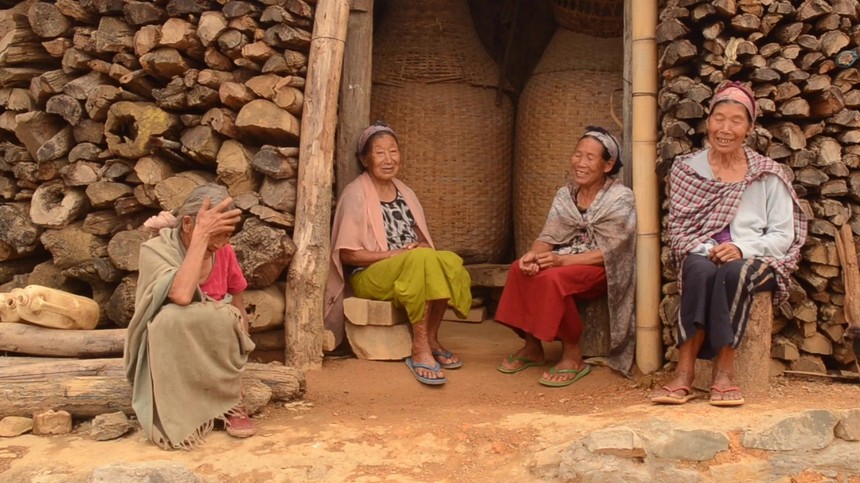 They're called "li". The traditional working songs of the rice farmers of Nagaland in India's Northeast. A kind of mesmerizing polyphonic conversation among the many men and women who might be out in the paddies at a given time, the songs are entrancing. They have a kind of otherworldly air to them, a kind of sound that puts them out of touch with western songs and even apart from more traditional Indian carnatic music. Li is more like the traditional music of the Native Americans in that it follows its own set of rules, rhythms, and rhymes, making it like discovering music for the first time to outsiders.

In directors' Anushka Meenakshi's and Iswar Srikumar's film Kho Ki Pa Lu, the title is used to describe the way the music moves through the fields. It translates to Up, Down, and Sideways, and while it sounds goofy, once you hear the music it completely makes sense. The directing team had made their way to the northeast from South India to make another film, but when they stumbled upon this song sung by the people of Nagaland, they were fascinated and decided to look into it, and I am so glad they did.

The local language of these farmers is called Chokri, and as of a 2001 census, it only has about 84,000 natives speakers left, landing it on the UNESCO list of endangered languages. What Up, Down, and Sideways does is find a way to tie the language and music of the Chokri speaking people to their history and culture, because when a language dies, so goes a part of a people.

Far more than just the story of these hypnotic songs, Up, Down, and Sideways is the story of the people singing them. The Li is a song that cannot be sung alone, it requires a team, more than even simply a partner. There are so solo "li" singers, there cannot be. Such is life in the village. No one survives on their own, these teams of singers work together in the fields for decades, learning not only the rhythms of the music that keeps them moving, but also the rhythms of their partners to best synchronize their work and be as productive as possible.

The film also digs into some of the story of Nagaland and its antagonism with India at large. The nation is one that is in constant struggle with forces within and without. Though it was all united under British rules until the late '40s, India's different geographical areas have wildly varying cultures and belief systems. Nagaland wanted to separate from India as early as the '50s, leading to a violent and unsuccessful insurrection whose legacy remains today in the form of a permanent military presence in the area.

However, Up, Down, and Sideways focuses more on the preservation of the Chokri Naga culture than the troubles, though many of the participants are certainly old enough to remember the bad old days. Up, Down, and Sideways is a compelling look at a region of India that many Indians even consider to be exotic and foreign. The filmmakers made a choice to help explore the culture and the efforts being made to preserve local customs in the wake of the current government push to homogenize different areas of India under a single, easily-recognizable, non-threatening cultural umbrella. Thankfully, it hasn't killed off the Naga yet.