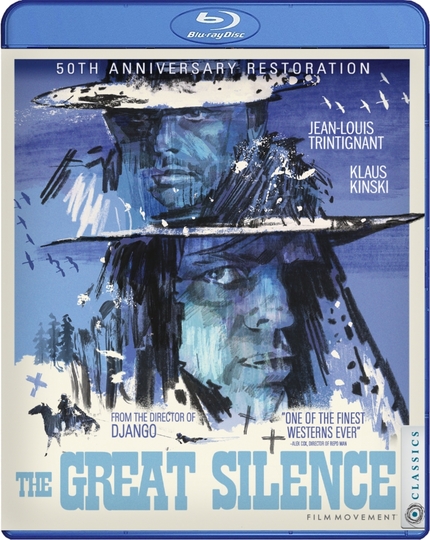 We've teamed up with Film Movement Classics to offer up to you one of three copies of Sergio Corbucci's classic Western, The Great Silence. Widely recognized as one of the greatest spaghetti Westerns ever made, The Great Silence has been remastered by Film Movement from a brand new 2K scan and released on Blu-ray this month. Here are the details of this marvelous disc:

This June, Film Movement Classics commemorates the landmark spaghetti western, THE GREAT SILENCE, with a stunning 50th Anniversary Restoration. Restored in 2K from original elements, the film, heralded as "one of the finest westerns ever[1]," directed by Sergio Corbucci and starring Jean-Louis Trintignant and Klaus Kinski will be available for cineastes everywhere in both Blu-ray and DVD formats. The loaded release also includes bonus features such as the rarely seen alternate endings, both original Italian and English language versions, the 1968 documentary featurette "Western, Italian Style" and more.

On an unforgiving, snow swept frontier, a group of bloodthirsty bounty hunters, led by the vicious Loco (Kinski) prey on a band of persecuted outlaws who have taken to the hills. Only a mute gunslinger named Silence (Trintignant) stands between the innocent refugees and the corrupt bounty hunters. But, in this harsh, brutal world, the lines between right and wrong are not always clear, and good does not always triumph. Featuring superb photography and a haunting score from maestro Ennio Morricone, Corbucci's bleak, brilliant and violent vision of an immoral, honorless West is widely considered to be among the best and most influential Westerns ever made.

I have dug through the disc and this is a definite winner that any film fan will want on their shelves. The new 2K restoration looks and sounds superb, Alex Cox's discussion of the work of Corbucci and his own experience with spaghetti westerns is engaging, and best of all is the 1968 TV docmentary Western, Italian Style, which talks to a lot of the movers and shakers on the scene at the time including the great Enzo G Castellari (Inglorious Bastards), The Great Silence Star Jean-Louis Trintignant, and many more. It's a wonderful time capsule that's nearly worth the price of admission on its own!

If you're interested in getting a chance to win a copy of this wonderful disc, just email me at josh [at] screenanarchy [dot] com with "The Great Silence Giveaway" in the subject line and your name and address in the body. I'll pick three winners at random one week from today on July 4th, and what better way to celebrate the holiday than with prizes! Good luck!