Review: LANDING UP (2008), an uneven look into homelessness and poverty 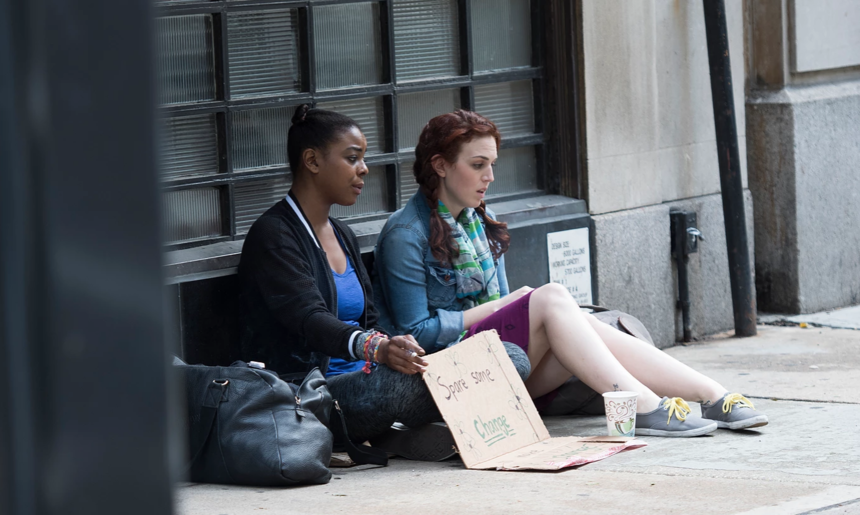 Daniel Tenenbaum’s “Landing Up” has much to say about the hard living conditions in a city like New York; about the trials and tribulations young people must confront in order to have a stable job, friends, a normal love life, and yes, even a place to live. Admittedly, the film does try to do this by telling a very over-the-top story, populated by well interpreted yet slightly hateful characters, but even though some aspects of the plot might be hard to digest, all in all, “Landing Up” ends up working quite well.

In any case, the movie’s main problem would be that the themes it conveys are more interesting than the plot itself. Tenenbaum and his team manage to develop a palpable atmosphere that effectively conveys what it’s like to live in a city like New York as a young person with both economic and personal problems; the thing is, the people inhabiting the film, as well as the conflicts they have with each other, aren’t particularly interesting or original. Nevertheless, despite the cynical nature of some of the characters —or maybe because of it—, “Landing Up” feels quite honest. It wouldn’t surprise me if I learned Tenenbaum based many of the film’s story contortions on his own experiences, or the experiences of friends and family members.

“Landing Up” tells the story of Chrissie (Stacey Martin), a young woman who has traveled from small-town Ohio to New York City searching for something important in her own life. Unfortunately, she gets tossed from her current living arrangements, and ends up living at a local shelter. Along with her best friend Cece (the late E’dena Hines), she visits many a bar every night in order to find someone to sleep with… and spend the night with. One afternoon, though, she meets the handsome David (Ben Rappaport) and falls in love. Now, she has to struggle with hiding the truth about herself from her new boyfriend, unable to admit that she doesn’t have a place of her own.

“Landing Up’s” main flaw is directly related to the characterisation of its main character. One tries to understand why Martin’s Chrissie resorts to trading sex for shelter, but the film doesn’t fully develop her struggles in order for this to make sense. The transformation from naive small-town girl to desperate drug addict simply happens too fast, making the character feel too much like an amoral, selfish woman. It’s very difficult to empathise with Chrissie despite all her problems; she doesn’t seem to care that much for her friends, she doesn’t listen to advice, and she doesn’t seem too worried about lying to her new boyfriend.

This makes it very hard for one to emotionally connect to the story, despite some nice performances; the more dramatic moments lack an emotional punch, which makes the overall experience of watching the picture quite a neutral one. That’s not to say that “Landing Up” is not well-made; on the contrary, as written before, the movie feels quite honest, like something based on a real story. The problem is that, despite the believable atmosphere and gritty visuals, “Landing Up” never manages to make the viewer feel like they’re experiencing it. One watches the film from a distance, admiring it to an extent, but never empathising with its protagonist. Performances are mostly solid. Despite the despicable nature of her character, Stacey Martin is quite good as Chrissie; she’s bubbly and energetic when she needs to be, but also selfish and hatable during the darker moments of the story. As said before, the problem lies within her characterisation; Martin tries to make Chrissie relatable, but the character lies too much, is too awkward too frequently, and never believably justifies her behaviour. Her chemistry with E’dena Hines’ Cece is palpable, but it’s not enough to make Chrissie feel like a well-rounded human being.

Hines, on the other hand, develops Cece in such a way that it’s not hard to identify with her, despite the fact that she’s not the protagonist. Here is a girl who was born into poverty, who has had to struggle all her life, and that despite all her problems, still believes —somehow— that there’s good in the world worth fighting for. She even believes in Chrissie, even though we’ve already established that she’s not a very kind human being. Hines was a talented and subtle performer; her tragic death —she was murder shortly after the filming of “Landing Up” wrapped— was a true loss to this world. As David, Rappaport perfectly embodies the savvy Yuppie without transforming into a caricature, and Grace Capless, as a little girl who lives at the shelter, manages to stand out without being annoying.

Interestingly, if one decides to watch “Landing Up” while focusing on Cece instead of Chrissie, it turns into a compelling look into homelessness and poverty. To be sure, Chrissie’s condition and personal struggles also contribute to such a perception, but since Cece is a more relatable and well-rounded character, trying to empathise with her instead of Chrissie definitely works in favor of the movie. Nevertheless, it must be said that, whichever way you look at the picture, Tenenbaum does a great job at making it feel like something only a Newyorker could’ve produced; the indie-centric soundtrack and the fact that they actually shot in New York certainly help.

“Landing Up” is a mixed bag; the themes it develops are compelling and the performances are, for the most part, strong, but the characterisation of its protagonist is problematic, which turns a potentially intriguing story into an exercise of hopelessness and annoyance. “Landing Up” is not a bad movie, far from it; it is too well-made and has too many good intentions for it to be a complete disappointment. But one must admit that, with a more relatable main character and more emotional investment, this could’ve been a more plausible and moving motion picture.