Listen Up! SHOCKING DARK Star Geretta Geretta Has Something To Say! 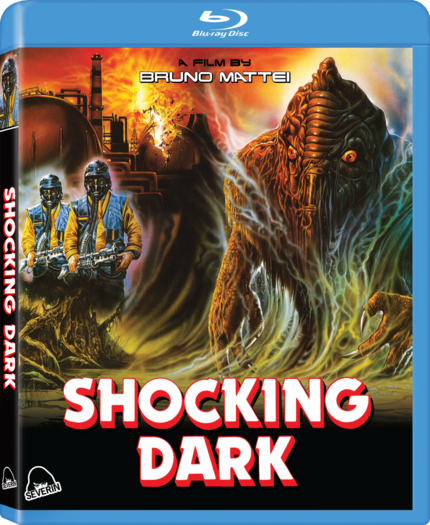 This Tuesday, our fine friends at Severin Films are releasing a trio of Rosella Drudi/Claudio Fragasso penned classics of late '80s Italian horror (Zombie 3: The Birds, Zombie 4: After Dead, and Shocking Dark). Perhaps the most impressive and crazy entertaining of the trio is Burno Mattei's Shocking Dark, a blatant Aliens ripoff set in the near future in a Venice choked by pollution.

In the film, a team called the Mega Force is deployed to neutralize an unknown threat beneath the streets of Venice, only to find themselves as prey for some slimy rubber frog alien creatures. Leading the commando force is Koster, played by '80s Italian cinema icon Geretta Geretta (Demons).

To celebrate the release of the film on Blu-ray, Severin have recreated a classic video store sales ad from Terminator 2's Robert Patrick. Why T2? Well, when Shocking Dark was completed in 1989, Italian producers put it into theaters as Terminator 2 in order to capitalize on the success of James Cameron's The Terminator, a film that - at the time - didn't have a sequel.

Those crazy Italians! Here's a little background on the ad from Severin Films:

In 1989, Italian schlockmeisters Bruno Mattei, Claudio Fragasso & Rosella Drudi concocted the rip-off movie to out rip-off all rip-offs. SHOCKING DARK (out on home video May 29th from Severin Films) was designed around the central plot of James Cameron’s ALIENS, along with some more gentle nods to THE TERMINATOR for good measure. When it came time for its Italian release, the producers elected to shadily market it as a pseudo-sequel to Mr. Cameron’s cyborg opus by re-titling the film TERMINATOR 2 - a solid two years before Cameron would make his own official follow-up!

Below you'll find the great ad from Geretta Geretta and the film that inspired it from Terminator 2.

Shocking Dark hits video store shelves TODAY, May 29th, and it is well worth your money!