SXSW 2018 Review: OUTSIDE IN, The Struggle to Find One's Self 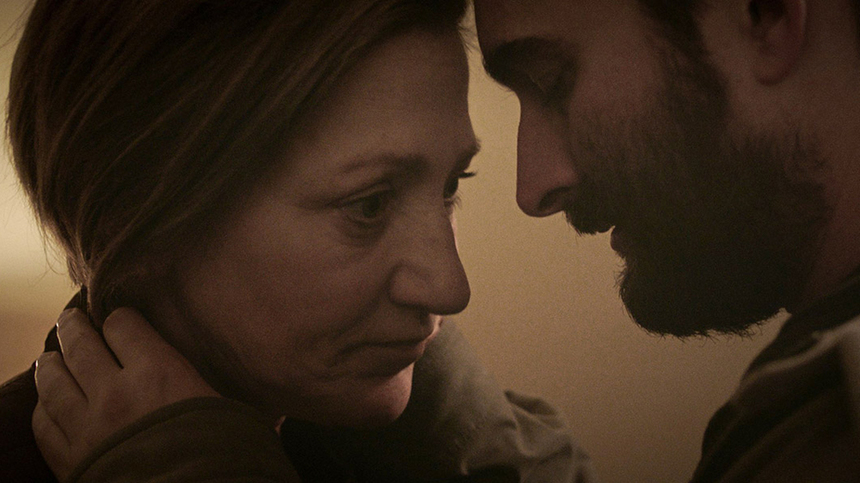 The work of Seattle writer-director Lynn Shelton (Humpday, Your Sister's Sister) is becoming synonymous with a certain corner of Americana: geographically the northwest of the USA, but also with middle-class (admittedly mainly white) people and their daily struggles with love, money, and belonging. This is meant as a compliment: it takes a strong artist to hone in on the pain that much of 'ordinary' people go through, and how they struggle to keep afloat. Her seventh feature film, Outside In, deals with some darker themes than her past work, but Shelton brings to it her signature unsentimental yet not unkind touch.

Chris (Jay Duplass) has recently gotten out on parole form a 20-year stint in prison for a crime he didn't commit. Much of the effort for his release was conducted by his high school teacher Carol (Edie Falco), who was his only contact with the outside world. Having spent his formative adult years behind bars, Chris struggles to adjust, and his attachement to Carol goes farther than she expects. She herself is trying to save her troubled marriage and reconnect with her teenage daughter Hildy (Kaitlyn Dever), as she tries to figure out how Chris now fits into her life.

Chris doesn't have a lot of options on the outside, with the job market unfavourable to ex-felons (to say the least) and lack of support from his family. The story is less about the prison system itself, and more about the psychological effects on those who have come out the other side with little support. Chris is out of touch with contemporary culture and technology, finds it difficult to make friends (especially when outings revolve around alcohol), and struggles to reconcile his love for Carol, given the seeming impossible circumstances.

Meanwhile, Carol is struggling to revive her marriage and family, with a husband who seems unconcerned about fixing their problems (unless it involves keeping Chris away), and a daughter going through teenage withdrawal. Carol also finds herself on the crux of a new freedom, with possibilities opening up for a new career that would give her greater fulfullment, both professionally and personally, even as she finds herself wanting to keep what she already has.

Shelton moves methodically through the story; this can't be rushed, just as Chris' transition into a 'normal' life, and Carol's transition into a new beginning, cannot be rushed. The exposition comes in bits and pieces, allowing us to see just how Chris must be feeling as he tries to navigate what is now a strange world. The camera is often close in on him, and other characters, mimicing the life he lead in the small space of prison, and how he still feels that closed-in space even in the wide world.

Both Duplass and Falco give two of their finest performances, in very different roles for both of them. Duplass tones down the usual obnixious, suave charm, moving through Chris' inward pain and struggle with subtle motions that often come out too much, too fast, as he has no radar to know how to temper his emotions. Falco's Carol is almost too kind for her own good, a woman who herself is struggling with her own, new emerging identity, whose kindness is starting to be overwhelmed with unfulfilled desires.

This is an introspective and thoughtful film, one that asks its audience to spend time with its characters, to understand their environment, the challenges they face and the mistakes they make, without sentiment or judgement. It's one of Shelton's strongest films, one in which she explores some darker territory without losing the heart of the matter.