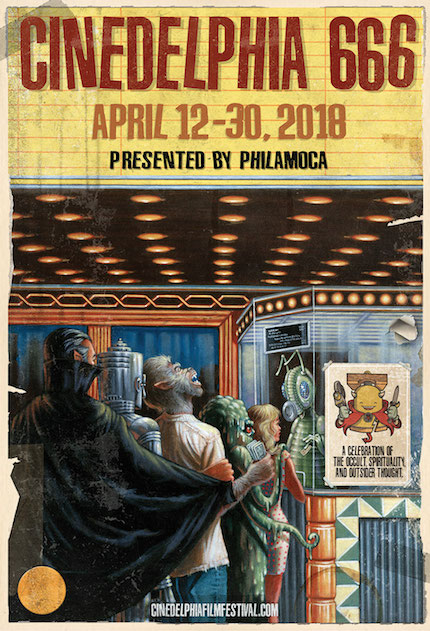 Whoa, PhilaMOCA is going to experience some crazy things next month! And if you've never heard of them, they're an art space in Philedelphia housed in a former mausoleum! Anyway, the Cinedelphia Film Festival (which runs April 12-30) has released it's awesome program, and Jessica Harper, the star of Suspiria, will be on hand to attend the rare, uncut 35mm Italian print of the film.

Also in attendence will be the director Steve Mitchell with his documentary King Cohen, which chronicles the career of cult filmmaker Larry Cohen (Q: The Winged Serpent, The Stuff, It's Alive, God Told Me To). Fans of The Room will love the live script reading and screening of the new team-up with Greg Sestero and Tommy Wiseau, Best F(r)iends Volume One, with Sestero attending!

Frank Henenlotter will be there with his both his subject, Mike Diana, and his new doc Boiled Angels: The Trial of Mike Diana, The Satanic Temple founder Lucien Grieve will perform a live ritual and Alucarda screening, and Jenn Wexler will attend fresh from SXSW and BUFF with her punk rock slasher The Ranger.

If that's not enough, My Life With The Thrill Kill will play, there will be a comedy show as well as a monster dance party, and you can expect lots of North American premieres. Full disclosure: my short film Rites of Vengeance plays alongside some awesome, religious and demonic-themed shorts in the program Hellspawn: Short Films of the Damned. You can also expect Chris McInroy's We Summoned A Demon, Stay from David Mikalson, Blood Shed by James Moran, and many more.

If you're local to Philly, don't miss this festival! The full schedule can be found both on this page as well as below:

AN EVENING WITH THE SATANIC TEMPLE - TST founder Lucien Grieves in attendance for a live ritual and presentation followed by a screening of the Mexican cult classic ALUCARDA.

SUSPIRIA - Actress Jessica Harper in attendance for a screening of a rare, one-of-a-kind 35mm Italian print of the horror classic.  Hosted at the Lightbox Film Center.

SATURDAY MORNING CARTOONS - The CFF present a monster-themed edition of PhilaMOCA's popular monthly program with free sugary cereals for all.

INDIANA - Philly Premiere of the atmospheric American indie concerning a pair of paranormal investigators on their last case.

I AM NOT A WITCH - Philly Premiere of the Sundance favorite focusing on the modern persecution of witches in Zambia and Ghana.

THEY REMAIN - Philly Premiere; two scientists investigate strange happenings at the site of a ritualistic murder.

THE ALLINS - Philly Premiere; a documentary that traces the life of legendary punk rocker GG Allin as well as the family he left behind.

BEST F(R)IENDS VOLUME ONE - Greg Sestero, co-star of The Room and author of The Disaster Artist, in attendance for his new film co-starring The Room creator Tommy Wiseau.

My Life With The Thrill Kill Kult - The industrial legends perform their first two albums live in honor of their 30th Anniversary; sold out.

BOILED ANGELS: THE TRIAL OF MIKE DIANA - Philly Premiere of the new documentary on the first American artist to be convicted of obscenity.  Subject Mike Diana and legendary filmmaker Frank Henenlotter in attendance!

PAA JOE & THE LION - An uplifting documentary on the Grandfather of Ghana's fantasy coffin trade.

HAGAZUSSA - A HEATHEN'S CURSE - Philly Premiere; the critically-acclaimed horror German exploration of witchcraft and pagan beliefs during the Dark Ages.

THE RANGER - Pennsylvania Premiere; a group of punk rockers face off with a demented park ranger in this 2018 SXSW hit. Director Jenn Wexler in attendance.

ROKUROKU: THE PROMISE OF THE WITCH - North American Premiere; spirits from Japanese folklore torment modern Japan in this innovative and oddball horror film.

WALPURGISNACHT - A celebration on the "Night of the Witches" featuring effigy building/burning, a lecture on the history of the pagan holiday, and a screening of The Wicker Man.