Check Out The Intense Trailer For SWATHANTHRYAM ARDHARATHRIYIL 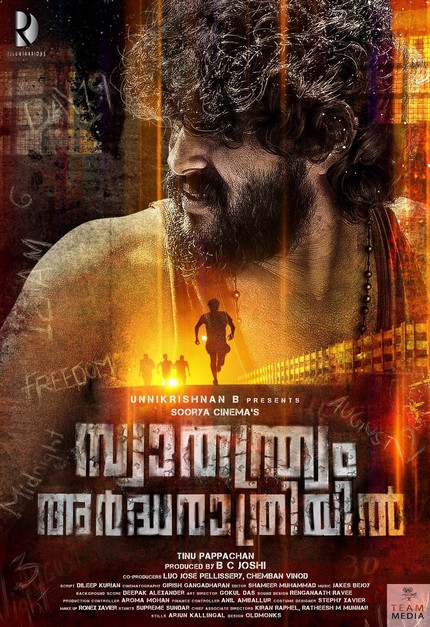 It's an exciting time to follow Indian cinema, and the Malayalam language film industry in the state of Kerala has been putting out some of the nation's most incredible new films for several years now. The lastest film to catch my eye is the debut feature from director Tinu Pappachan, assistant director to Kerala's Lijo Jose Pellissery (Double Barrel, Angamaly Diaries, Ee Ma Yau). The film, titled Swathanthryam Ardharathriyil (Freedom at Midnight), is a new action thriller with one hell of a pedigree that looks really amazing.

Swathanthryam Ardharathriyil was co-produced by Pellissery and his Angamaly Diaries writer/star, Chemban Vinod Jose. The new film stars Antony Varghese, who came out of nowhere to lead the cast of Angamaly last year to huge critical and commercial success, putting Malayalam cinema on the map across India in a way that it hadn't been in quite some time. Also among tha cast in a prominent supporting role is the force of nature that is Vinayakan, a performer who has worked in cinema for almost twenty years as a junior actor and dancer/choreographer, but really made a worldwide impression with his role as Ganga in director Rajeev Ravi's Kammattipadam. A close look at the trailer also sees appearances by both of the producers in the film, which is exciting to see as Chemban Vinod does an amazing job in Ee Ma Yau, which is still awaiting release.

In Swathanthryam Ardharathriyil, Anthony Varghese stars as a jailed man who learns that he's set to get assassinated soon. The only way to survive is to get the hell out of there, by any means necessary. Lots of great fights, frenzied action, and almost guaranteed great acting make this one a must see. Check it out for yourself below.