Brie Larson stars in a romantic musical comedy with a social conscience (?!). 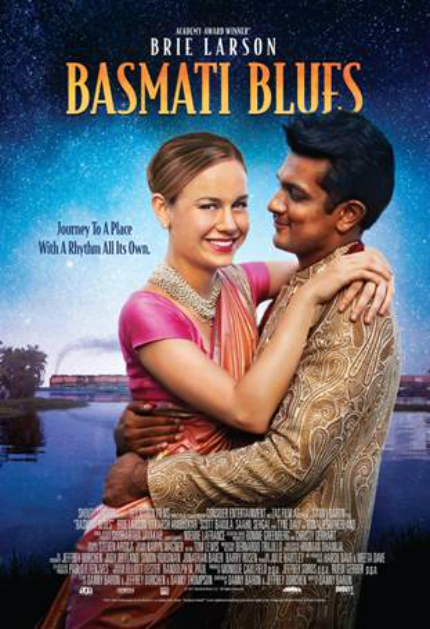 By the time Donald Sutherland leads a song and dance number, kicking around gliding office furniture and extolling the virtues of capitalistic greed for "The Greater Good" -- which includes the should-be immortal line "Obi-wan Kenobi gave up to Darth Vader" -- I was already sold on Basmati Blues.

Granted, it's very much a well-intentioned, white man's perspective on India. It incorporates far too many racial and cultural stereotypes to list, some that may be highly offensive to the Indian people and also to filmgoers of good taste and discernment. It's pitched to a very broad, lowbrow demographic. The premise follows a singing American scientist who goes to India to sell thousands of supposedly ignorant farmers on the idea of buying lab-created rice and also hand over their land to an evil American corporate overlord.

And yet: when Brie Larson is the singing scientist, it's a whole different story.

Cast before the release of Short Term 12, which marked her as a breakout star in the making, Basmati Blues perhaps sounded like a golden opportunity to Larson at the time: an independently-made musical that would allow her to sing several songs, show her comic skills, and display a social conscience. What could go wrong?

Reportedly, budgetary and production challenges delayed filming and created other problems for director/cowriter Baron and his team, and so Basmati Blues was not completed until last year. In the present-day reality of Larson's status, this film may look like a step back for the actress.

In the context of her career, however, and making allowance for the low-budget nature of the film, it's a marvelous early look at a star in the making. From her first number, as she breaks into song in her own apartment, she looks glowing and confident. While it's true that the story follows the overly familiar beats of 'an American in a foreign, very strange land,' Larson never condescends to the material. She rides with the cultural challenges, adapts, and even acknowledges her mistakes. She is very much the decider when it comes to her life, her relationships, and her business. Her singing scientist character has been duped along with everyone else, so she makes course corrections as needed, in a believable -- well, mostly -- manner.

It's easy to root for Larson, who brings as many shades as possible to a scientist who is impossibly bright, cheerful and adaptable. Donald Sutherland (as the evil corporate overlord, Tyne Daly (as his corporate henchperson) and Scott Bakula (as Larson's father and fellow scientist) all get to sing too, which one imagines might have been the main attraction for each of them. They play their roles as broadly comic as possible.

The leading Indian characters are also stock players, though there is at least a hint that they recognize they are obligated to fall into line with the stereotypes imagines for them. Utkarsh Ambudkar, as a college student who needs money to complete his studies as an agricultural scientist, is the leading romantic competitor for Larson's affections. Saahil Sehgal represents the corporate mentality and another bidder in love. But we know who's going to win.

In sum, Basmati Blues is the cultural train wreck that we all expected it to be, only better than expected, because Brie Larson is awesome. And Donald Sutherland, singing and dancing - how cool is that?

The film is now playing in select theaters throughout the U.S. It's also available on various Video On Demand platforms.

Do you feel this content is inappropriate or infringes upon your rights? Click here to report it, or see our DMCA policy.
Brie LarsonDanny BaronDonald SutherlandIndiaSaahil SehgalScott BakulaUtkarsh Ambudkar