Blu-ray Review: NIGHT OF THE LIVING DEAD Shines in New 4K Restoration From The Criterion Collection

Criterion's Blu-ray of George A. Romero's landmark horror film is well worth the wait. 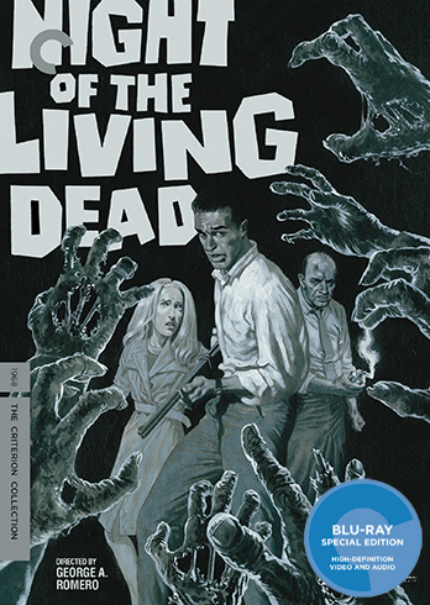 George A. Romero's Night of the Living Dead has been one of The Criterion Collection's worst kept secrets for several years now.

Ever since the planned 50th anniversary restoration was announced, horror fans around the world began saving their pennies for the eventual Blu-ray release of what is unequivocally one of the most significant fright films ever made. I'm here to tell you, those accumulated dollars will not go to waste. This Blu-ray edition of the film that not only changed the direction of horror, but also represented a watershed moment in independent film, is well worth the wait.

I'm not going to pretend that I have anything new to say about Night of the Living Dead. The film's place in popular culture and its wide ranging ripple effect on the world and business of independent cinema are well documented. It's not only one of the most financially successful independent features ever made, sadly not making much for its creators after some sloppy copywrite snafus in the early days, but it inspired a wave of socially conscious horror that continues even today, in the year 2018 when just such a horror film - Jordan Peele's remarkable Get Out - has been nominated for a Best Picture Academy Award.

Romero's film, about a small group of disparate personalities struggling to survive an outbreak of undead flesh-eaters, tackles all kinds of social ills that continue to plague us to this day, and it manages to do so in a remarkable tense and entertaining way. Made on a budget of less than $20,000 by a group of friends and co-workers who cut their teeth making ads and industrial films, Night of the Living Dead was a surprise hit that reverberated far beyond the creators initial dreams, and continues to inform not only the kind of horror we see today, but also essentially created what has become known as the zombie subgenre (Romero had no such intention at the time), and is such a ubiquitous presence in the culture that many of its best known lines are part of the casual parlance of modern day films geeks ("They're coming to get you, Barbara" memorably getting a shout in Edgar Wright's breakout film, Shaun of the Dead, who even borrowed a title convention from this film and its sequels.).

The bottom line is that this is one of the greatest and most important horror films of the post-war era, perhaps no film between the end of the Universal Monsters initial cycle in the early '40s and the slasher boom of the late '70s has had a broader influence on filmmakers and filmgoers alike, and it more than earns that distinction, even viewing with fresh eyes 50 years later. A masterpiece.

The Criterion Collection presents Night of the Living Dead on two-disc Blu-ray special edition, newly restored in 4K from the original 35mm negative supervised by Romero and his original team. having seen the film numerous times on ever evolving latest-greatest media (35mm release print, VHS, DVD, public domain sourced Blu-ray, etc...), I can say with a full heart that this is the best the film has ever looked for home consumption.

The new 4K restoration is impeccable, absolutely stunning. In fact, it's so good that it brought to my attention just how rough the film's initial production must've actually been. I'd never noticed the occasionally sloppy framing, the constant lens vignetting, the odd little bits and bobs that clearly identify this as a low budget production. I say that not to dismiss the film's significance or power, but to show just what an enlightening this presentation is. The fact that I never saw these flaws before is testament to the incredible quality of the restoration, and the fact that they didn't bother me one bit is testament to the film's enduring power.

When it comes to extras, you can always count on Criterion to make a play to have the definitive version of any film they put their hands on, and Night of the Living Dead is no exception. On the first Blu-ray disc we get the film, two archival commentaries from 1994 (one featuring Romero, John Hardman, Marilyn Eastman, and John Russo and the other with Russell Streiner, Vincent Survinski, Judith O'Dea, Bill Hinzman, Kyra Schon, and Keith Wayne), and the incredibly rare Night of Anubis workprint sourced from a 16mm reduction print on which the film was cut. Anubis is almost identical to the finished product with only very minimal changes, and this version - in significantly lower quality - is introduced in a wonderful 8 minute explanation by Russ Streiner, one of Romero's co-producers on the film.

The second Blu-ray disc presents hours of bonus materials, both new and archival. The headline piece is a featurette called Light in the Darkness, which is a collection of interviews with working filmmakers from Frank Darabont (The Shawshank Redemption), to Guillermo Del Toro (The Shape of Water), to Robert Rodriguez (El Mariachi), and more in which they discuss the film's influence on them. It is a very loving tribute to the film and George Romero. There are also new interviews with John Russo, Russ Streiner, John Cironella discusses the stock music used in the film, the Every Frame a Picture team presents an appreciation of the film, and there is a short 16mm newsreel from the original production as well. But these are not my personal favorite pieces.

Among the hours of interview footage are a few pieces that stand out to me and deserve special notice. First up is a 45 minute shared segment of NBC's Tomorrow with Tom Snyder from 1979 in which Romero and Don Coscarelli (Phantasm) discuss the state of independent horror as each was currently in cinemas, Romero with Dawn of the Dead, and Coscarelli with the first Phantasm. The conversation is surprisingly frank and reminded me of a time that I didn't dread going to a regular cinema, really fun stuff. There's also a rare audio interview with NOTLD star Duane Jones who almost never spoke of the film or his experience. This interview is incredibly enlightening about the elusive actor and speaks volumes about his experience on the project and his ambivalence about its cult success. More really great stuff, for sure.

Night of the Living Dead has been stuck in public domain purgatory for decades, meaning that anyone with reasonable access to a source, no matter how shoddy, could release the film and claim the proceeds. While it's a shame that Romero is no longer around to enjoy the fruits of his legacy, we all benefit from this presentation and its beauty. Fans of Night of the Living Dead are no doubt aware of the hundreds of home video iterations this film has had over the years and Criterion doesn’t quite manage to gather all of the available supplemental material into one place, so there are still reasons to keep your old DVDs and Blu-rays if you're a bonus feature fanatic like I am. However, if your main concern is the A/V quality of the film and a substantial - though not comprehensive - collection of bonus materials, you can safely spend your money here. Our highest recommendation.

NIGHT OF THE LIVING DEAD - Trailer from Janus Films on Vimeo.

Do you feel this content is inappropriate or infringes upon your rights? Click here to report it, or see our DMCA policy.
criterionduane jonesgeorge romerojudith odea