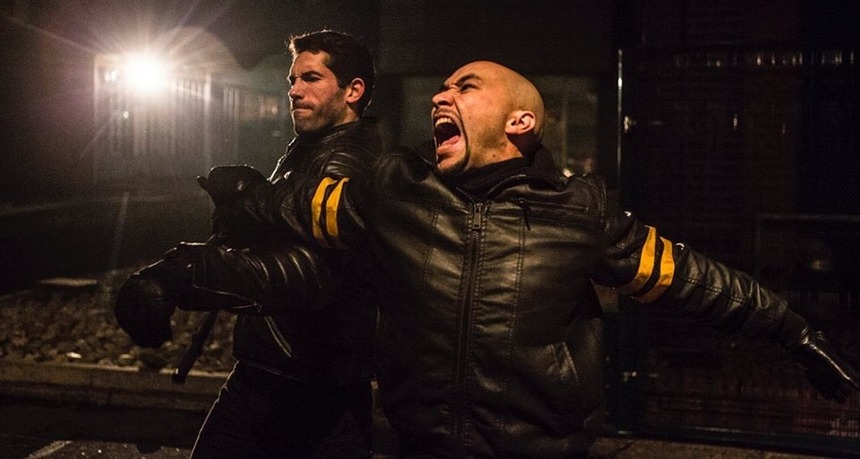 There's something quintessentially British about Mike Fallon, the high-class hitman at the center of Pat Mills' original Accident Man comic series from the early 90's. Orderly, deliberate and vicious, the character is like Jame Bond's sociopathic brother that everyone figures is a bit mad but no one can prove it.

I don't know what that says about 15-year-old Scott Adkins, who discovered the character and fell in love with him, but Fallon has stayed with the action star until now when he's been able to realize his dream of bringing him to life on screen.

Equally British in tone, Accident Man the movie feels at one with Guy Ritchie's wise guy movies as funny as they are thrilling. I had a chance to speak with Scott Adkins about bringing his dream project to life, how hard it is getting movies made these days and who he wants to fight on film next.

ScreenAnarchy: Tell me about your relationship with the ACCIDENT MAN source material.

Scott Adkins: I was about fifteen and I was walking home from school. There was a newsagent and I went in and saw this comic called Toxic. And inside that was Accident Man. So I bought it as a kid and I just loved how it was very English, quite violent and there was a martial artist at the center of it who killed people by making the death seemed like an accident.

I always harbored the dream that I would bring Accident Man to the screen one day and play Mike Fallon. What I know now is that quite a few producers had optioned the property and it was almost made a couple of times. Luckily for me it wasn't and now, here we are.

I wrote the script myself with Stu Small out of necessity and I produced it out of necessity. And really it's a labor of love, the dream project. It you'd have asked me, "Scott you can make any film, what's it going to be?" I would have said, "Accident Man please."

Was it important to keep in British? Was there ever an impulse to Americanize it at all?

That was absolutely one of my main concerns. When we were trying to get financing for the project you'd hear things like, "Maybe we should set it in America, can we have more Americans in it? Can we film in Bulgaria?" and all the rest of it, but I wanted it to be set in London and to keep it as English as I could.

Certainly Mike Fallon had to be English. There's a lot of English wording in there too, lots of English swear words. It was important.

It must have been liberating not to be playing a Russian or an American for once. Use your actual accent.

I don't know what my accent is anymore! The accent I use in the film is a London accent, in fact. But yes, using an English accent is ultimately one less thing to worry about. I didn't have to research the London accent.

What was most liberating actually was to be speaking words that I'd written. Along with Stu, we'd poured over the script for a long time so the words were all there in my head ready to be set free. As an actor, to know every facet of a character, to have all the subtext makes it easier.

Were there any challenges finding the right tone for ACCIDENT MAN?

Above all else, the goal was to make an entertaining movie with a little bit of a wink to the audience, let the audience know they can be in on the joke and that they can laugh with us, you know?

There are moments of real drama, and when we needed those we went for it. But if there was a gag, even a cheap gag, well, we went for that as well! It didn't have to land every time either. None of us are comedians. So it's not as though we're expecting you to laugh out loud, but it's definitely amusing in terms of the dark humor. One thing I will say is it's definitely my sense of humor all over it.

Actor, writer, producer. Is there a "director" credit in your future?

It definitely creeps in more and more the older I get, yeah. And the more frustrated I get with things. You just have to find the right project. Now, I wouldn't want to direct something that I'm the lead in and is an action film, because it's so physically demanding. If I'm in every scene, and I'm directing and I've got a short schedule that would be very difficult.

You've come a long way over the last ten years in your career. Do you ever reflect on that, or keep moving?

When I started out, I gave myself pretty low expectations. When you grow up, you tell your parents, the people you grow up with in a small town, "I want to be an action star", of course, they're waiting for you to wake up and the dream to be over.

So, I set my expectations of what I thought was achievable low and then found myself achieving it and then more until I achieved everything I wanted to. What I would say to people set your expectations high and reach for the stars because what are you going to do when you reach them? I wish I'd had that mindset when I started out.

Is there anyone on your bucket list you'd like to take on in an epic movie fight?

There's one guy and his name is Donnie Yen. I'm coming for ya, Donnie!

That's all I've got to say.

Except that Accident Man comes out on February 6 on DVD and Blu-ray. We've got a commentary on that and two bonus features. It's worth picking up in that format I think.

What about the UK?

April 16 in England. That's what the distributors landed on there.

And what about a sequel?

Well this brings us to the problem we have these days. Accident Man is an independent film that won't see a theatrical release so the only revenue is from home sales. So if you're going to go and download it for free then we're not doing a sequel.

I know the film industry has been hit hard by piracy, but has new streaming revenue opportunities like Netflix and Amazon helped at all?

So it sets you back and you realize that a lot of people who saw Ninja 2 didn't pay for it. It's obvious what's going on.

As far as Netflix and Amazon goes, yeah, there's revenue there but it's nothing like it was in the good old video shop days.

Back then you had six or seven weeks to make an independent action film. Kickboxer, films from that era had about six weeks. Yes, they shot on film, but, man, if I had six weeks, the stuff I'd be able to do....  but now we're forced to shoot these films in three weeks. I managed to get 24 days for Accident Man which was a great stress. Thankfully I had a great line producer.

These days you have to raise the bar and outdo yourself each time, with less time and less money. It's mad.

It is. Good luck out there.

Accident Man will be released on Blu-ray and DVD on February 6, 2018.