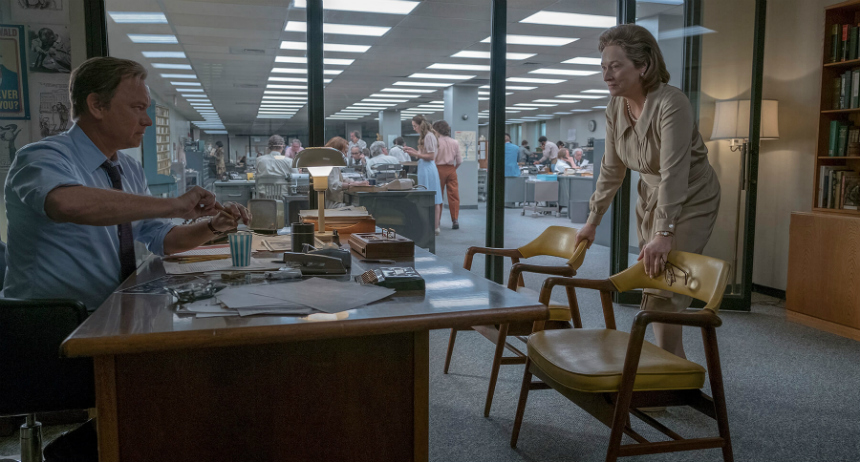 Steven Spielberg's best thriller since Jaws, and his most 'of the moment' movie ever, The Post is also an unexpected sort of 'coming of age' tale.

Rather mysteriously beginning during the Vietnam War before jumping forward in time and location, Spielberg utilizes every tool at his disposal to manufacture the atmosphere of a thriller. The camera slowly darts through a jungle before it whizzes along city streets, into buildings and down corridors at a dizzying speed, accompanied by the sort of quickly resolving, staccato musical score that sounds not at all like the artistry of Spielberg's usual composer, John Williams, though it is.

It's all rather exciting and gets the blood pumping. Then, very soon, the realization hits that it's an arresting distraction, an approximation of how the characters must feel: stressed out and tense because something momentous is about to go down. Thus, the stakes are established quickly and a sense of danger abounds, even if it may not be initially clear why everyone is so anxious.

Still, it's very easy to feel empathy for the vast crew of newspaper people, in large part because they look so common, ordinary, and working-class. These are not television correspondents who must be as concerned about their looks as they are about the accuracy of their coverage. Nobody cares about fashionable clothing or flattering hairstyles; in the newsroom, it's all about getting the story.

That is genuinely thrilling in itself, at least for me, and the gurgling pot of slow- boiling water, from which an individual journalist occasionally bubbles up with a new angle or fresh insight, is tremendously appealing. If All the President's Men inspired countless young people to enter journalism -- and it did -- then perhaps The Post can introduce a new generation to the seductive power of aspiring to learn the truth about something ... anything.

The journalists are portrayed convincingly by an array of good actors -- the entire cast is ridiculously good, like a very deep, high-quality team of American football players, with bit players hitting their marks just as well as the stars -- but the standout is Bob Odenkirk as Bob Bagdikian, a veteran journalist who plays a key role. Odenkirk has justifiably risen to greater prominence as an actor due to his superb leading turn in the TV series Better Call Saul and he absolutely pins his supporting role here. 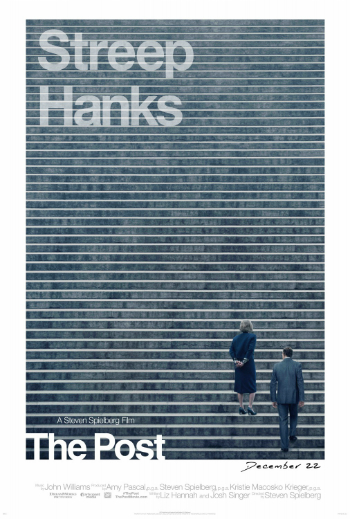 At the unquestioned top of the newsroom staff is editor Bradlee and, frankly, it's impossible to forget Jason Robards' memorable performance in All the President's Men, which was tart and irascible and growly and altogether perfect in my mind. It was also a supporting role, while Bradlee moves center stage in The Post.

Perhaps it's not surprising that Tom Hanks is a somewhat more friendly Ben Bradlee. Hanks was almost sinister in The Circle earlier this year, which suggested that he might add darker tones to his performance here. He's certainly a strong authority figure, yet he's also an editor who will stand up for his people and fight the good fight. The full flower of his humanity is on display, and while that may be more accurate, and often stirring, it's difficult to forget that it's Tom Hanks under the occasional stern glower, his eyes swimming with sympathy.

And then we come to the unexpected 'coming of age' angle in the film, which belongs entirely to Kay Graham (Meryl Streep), publisher of The Washington Post. The men around her, notably Fritz Beebe (Tracy Letts) and Arthur Parsons (Bradley Whitford), treat her with due, if variable, respect, but despite her age and position, she looks like an uncomfortable little girl when she's swept into a conference room among an overwhelming number of men in suits.

She's confident and poised in the high society of Washington, D.C., hosting dinner parties and chatting with the ladies, but there's a strong suggestion that she's out of her depth as "a newspaper woman." She is the rightful heir to the throne, so to speak, yet a very reluctant monarch, and fully conscious of her own limitations and, again, just to repeat the salient point, since this is taking place in 1971 America: she's a woman and thus not truly considered an equal to any man.

How it is that Streep communicates everything that she does is beyond my ability to comprehend, perhaps because I don't fully understand what it is to be an artist in the performing arts. Suffice it to say, she is amazing without calling to much attention to herself; she becomes Kay Graham in this film without manifesting an inch of her natural star power.

The screenplay by Liz Hannah and Josh Singer is beautifully written, the editing by Michael Kahn and Sarah Broshar is exceptional, and John Williams' score is quite good. Having said all that, The Post is not the best film that I've seen this year. There are moments that do not ring true, Janusz Kaminski's photography is sometimes oddly lit, and some historical parallels to modern-day events are too on the nose.

Even so, The Post is more than enjoyable as motion picture entertainment. And in an age when the power of the press is under merciless attack, it feels like a necessary and urgent story to tell.

The film opens in select theaters in the U.S. on December 22 and will expand nationwide on January 12, 2018.