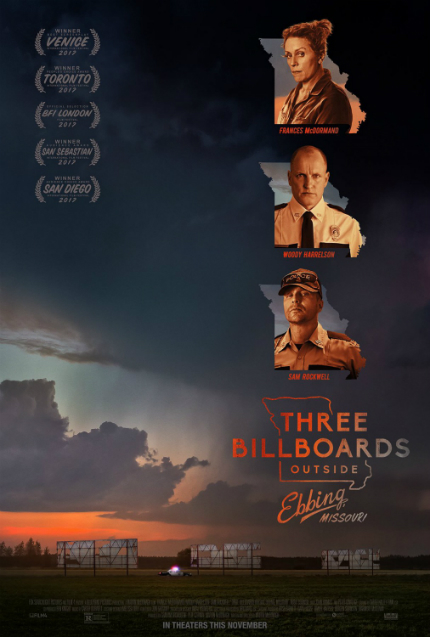 In Bruges director Martin McDonagh has laid down a winning hand with Three Billboards Outside Ebbing, Missouri. The Englishman's latest script is just about everything you could ask for in a screenplay.

It's certainly not as out-and-out a comedy as the director's last two features, but Three Billboards Outside Ebbing, Missouri nevertheless still has all of McDonagh's unforgettable wit. And as the title probably suggests, you should be sure to expect something a little idiosyncratic or different. In fact, at first, it almost seems as if McDonagh is starting off with a rather uncharacteristically moody drama.

The first thing we see in this movie is the androgynous-looking Mildred Hayes (Frances McDormand) chugging along a forgotten road in thick, deep fog. At the foot of a green valley, she pulls up her car and stares long and hard at three giant billboards in a row along the road. Country music plays gently in the background, and the camera follows her pensive gaze to what looks like a cemetery of old advertising. Gaps are present where sections of the disused billboards have fallen away, and the few remaining billboard ribs are covered in layers of mismatched images.

It's really a rather wonderful momentary contemplation of a world that is being blotted out by more recent digital substitutes, and also a part of middle American that has been cut out by larger, more modern highways that suck people away from them. But even if this all seems a touch surprisingly subtle and deep, McDonagh definitely doesn't indulge in this kind of retrospection contemplation for long. Three Billboards Outside Ebbing, Missouri behaves with all the kind of fast-paced wit that many the director's fond fans will hope for - it just does it with occasional notes of something deeper in the background.

Seconds after this scene with the billboards, for example, Mildred is soon swaggering into Ebbing Advertising Company's office. In a bad-ass slow-mo she waltzes in, whilst music that suggests something not unlike an old-school Western shoot out is about to go down plays in the background. Except this time, only verbal shots are fired, and soon Mildred is sniping down at the company's manager in a series of brilliant one-liners. The put-downs are really rather exceptional, and when two formidable sparing partners come up against each other, there are few places you'd rather be than watching this film.

From between this witty repartee, we discover that Mildred wishes to hire the three billboards -- and she isn't afraid to splash the cash to do so. She hands flash cards to the manager outlining what she wants them to say, and his response ("You're the mother of Angela Hayes, I assume?") begins to give us a sense that there is a more sinister back story at play. Next we cut to the billboards, and in a darkly comic reveal involving a local cop, we see the words "RAPED WHILST DYING" "AND STILL NO ARRESTS?" "WHY NOT, SHERIFF WILLOUGHBY?"

Thus begins the incredibly talented mix that this film achieves between significant social critique, moving drama, and near-perfect comedy. Understandably, it will sound as though those things could in no way be compatible given the subject matter, but this movie pulls it off in a way that feels a bit like a darkly themed novel. Within Three Billboards Outside Ebbing, Missouri, there seems a deep-seated sadness about the wrongs of the world, but at the same time there's constantly this defiant, almost shrill squeal of laughter against the darkness and despair of McDonagh's fictional world.

This is exactly the humour we find in the thoughts, actions and lives of Mildred and Sheriff Willoughby (Woody Harrelson), as they slowly go to war over the case of Mildred's brutally murdered daughter - something constantly stoked by the background presence of the three signs. And as far as premises go, this idea of a mother having to use three forgotten billboards as a stunt to ensure that her daughter's death goes unforgotten is really rather brilliant, and definitely stands out.

What's more, Three Billboards Outside Ebbing, Missouri literally never does what you would expect it to do. Ever. With genuinely impressive creativity and restlessness, it's constantly coming at you from left field with immensely funny quips, or unexpected character actions that you could never see coming. In fact, it's almost as McDonagh has sat down and asked himself what would be a total surprise in every single scene. And nevertheless he has shaped all the shocks and tomfoolery into something that is totally perfectly formed and enjoyable. It's this quality in particular that really makes McDonagh's latest a shining example for screenwriters everywhere.

The whole cast never misses a comedic beat either, and the whole film really represents one of those great, rare chances for an older female lead like Frances McDormand to shine -- and shine she does! McDormand carries herself as a fearless, zero-shits-given mother perfectly throughout. Okay, some of the jokes that fall to her and some of the other cast are perhaps a bit too outrageous or unthinking, but it does seem as though the director was definitely trying to interrogate himself and stay on the right side of humour.

What's more, I think what fascinates me the most about Three Billboards Outside of Ebbing, Missouri is how conventionally made it is, both in terms of cultural setting and in terms of technical finishing. It's almost as if all of the technical stuff melts into the background. For some, this would represent exactly what good film story telling should be, but for me, it would normally provoke some harsh, uncontrollable sense that it all feels too familiar. But in McDonagh's hands it somehow all feels different.

In this film, the conventional style and cultural feel almost reinforces the jokes and comments it is making about this society. And if anything, it highlights how exceptionally reinventive the whole script is.

Do you feel this content is inappropriate or infringes upon your rights? Click here to report it, or see our DMCA policy.
Frances McDormandKerry CondonMartin McDonaghSam RockwellWoody Harrelson