Hedy Lamarr was one of Hollywood's most beautiful stars. She was known for her amazing face and propensity to stand up for herself in the old Hollywood boy's club -- a feminist before the word was invented.

But it wasn't widely known that she was also smart as hell; in fact, she was the inventor of the frequency hopping technology that secure wifi, bluetooth, cell phones, military tech, and GPS all use.

Sadly, we learn in Alexandra Dean's eye-opening doc, Bombshell: The Hedy Lamarr Story, that she was largely ignored because of her looks and Hollywood status. Lamarr had delivered her patent (created with friend and composer George Antheil) to the U.S. Navy with hopes of helping defeat the Nazis in World War II -- and she was laughed at. She was told that if she wanted to help, to sell kisses and war bonds.

Lamarr's talents and intellects could have and should have been put to better use, but she raised money for war bonds anyway -- to the tune of over $350 million. 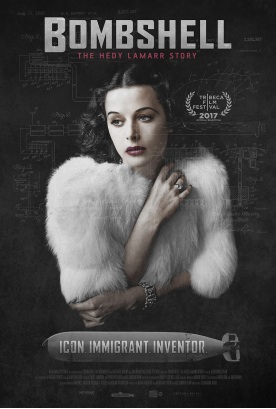 She could have become a scientist, and probably would have if she'd been born in more modern times. However, the fact is that she was born with incredible beauty that captured attention.

At 19, Lamarr, the Austrian girl, had already starred in a scandalous film, and was married to a German industrialist that supplied arms to the bad guys. Yes, I'm talking about Nazis -- and Mussolini. When she'd had enough of being a too-young trophy wife soon to be on the wrong side of history, she actually drugged a maid who resembled her the most in the manor, and stole her uniform -- then spirited off into the night on a bike with her jewels pre-sewn into a coat.

That night alone would make for a fantastic film adaptation.

From there, she escaped to England and caught the attention of Louis B. Mayer, who'd come to Europe to scoop up actors looking to flee due to the rise of Nazism. She rejected his offer at first, but thought better of it, and went to Hollywood where eventually she became a movie star. In her trailer and at home, she'd experiment, study, and invent.

It would seem that some people get all the gifts in this life, but Lamarr's life wasn't always so wonderful. She wed several times -- six to be precise -- was cheated on (I know, WHAT?!), became addicted to drugs from her studio days with the real "Dr. Feelgood," shoplifted even though she was rich, became a recluse, and had some unfortunate plastic surgery. She had many highs and lows throughout her life, which we discover in detail.

However, Bombshell ends on a high note with a voice recording from Lamarr:

"I'll read you something pretty. People are unreasonable, illogical, and self-centered. Love them anyway. If you do good, people will accuse you of selfish, alternative motives. Do good anyway.

Director Dean, a first-time helmer, has done a terrific job of putting together the pieces of a woman's life and assembling them into a fascinating piece of history. I noticed Susan Sarandon listed as executive producer; if nothing else, Sarandon deserves applause for helping bring this story to light. Everyone involved in this doc deserves applause, but especially Dean and Sarandon. As Hollywood has shown us more often than not, it takes a woman to tell a woman's story -- and we have to tell them just as Lamarr lived -- proverbally fighting, kicking, and screaming to get things done.

Bombshell: The Hedy Lamarr Story is in theaters today. Find a screening near you here.

Do you feel this content is inappropriate or infringes upon your rights? Click here to report it, or see our DMCA policy.
Alexandra DeanBombshell: The Hedy Lamarr StorySusan Sarandon