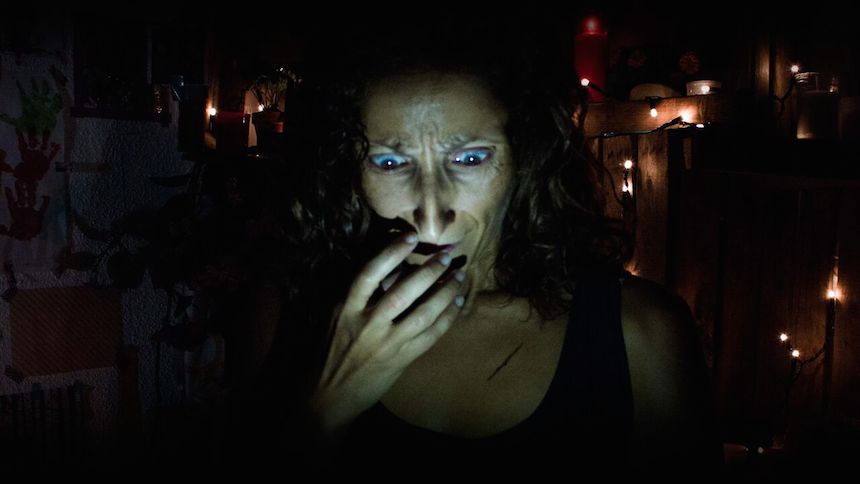 (The still above is from iMedium, one of the best shorts in the Small Gauge Trauma block.)

It's no secret that we adore Fantasia here at ScreenAnarchy. In addition to the great live events, features, and raucous Q&As, the festival always programs great short films, and the 2017 edition was no different. (Check out the Born of Woman program review here and the International Science Fiction Short Showcase here.) Small Gauge Trauma is a favorite annual viewing for me, and I saw some incredible films this year in this block.

Sweet Tooth starts out the block with your typical scary ghost child tale. At just five minutes, it's a bit too short, and offers a jump scare, but also a little bit of real dread. It's unclear why kids haunt someone that helped them, but perhaps they're only there to satisfy their sweet tooth, hence the title.

iMedium knocked my socks off. A woman uses a phone app to find her missing daughter, with scary accuracy. It's hard not to spoil this one, but the use of the camera and app were chilling and extremely effective. There's a ton of talent on display here in every aspect, and I'd love to see Garcia given the reins to adapt this film into a feature.

Taste is an amusing black comedy about two witches dueling against each other at a high-class dinner party. It has some hilarious one-liners such as: "I put my dick in places darker than your black soul." I loved Taste. It's styled, shot, and lit beautifully, and features reprehrensible characters you don't feel bad laughing at. This is another film I'd love to see full-length.

Crop is too long and doesn't feel fully finished. While I don't need answers spoon-fed to me in cinema (I'd distinctly rather not), Crop ends at an odd point that left me with a "huh?" It could be that a re-edit is the answer. However, Crop did provide an interesting snippet into the lives of two organ harvesters, which is original when you count the myriad ways in which horror can be very UN-original. I'd like to see more to this story; perhaps a web series is the answer.

Pumpkin is a film right up my alley, shining a spotlight on socio-political and current events. This film follows a great of internet vigilantes who take a special form of vengeance on a local pedophile --- all for a streaming audience to see. One particularly satisfying moment for me was a huge "YES!!" The fact that the film also delves into the psychological after effects of the characters is also a win. Although we've been conditioned to great films like Death Wish and the John Wick universe, most films don't explore the consequences of such vengeance. Pumpkin alludes to that, which was nearly as satisfying as that one moment, which I won't spoil. A downside to the film is that I wasn't able to hear a lot of the dialogue since it was recorded through masks. This is an easy fix with ADR, however.

Born of Sin starts off promising, as a child is left in a car by her drunk, drugged out father as he leaves to go to a bar. Of course, she's left there for a significant amount of time, and goes to sleep in the back seat after playing games on her phone all night. She wakes up to a creepy guy breaking into the car and is promptly kidnapped and thrown in a burlap sack. I think about all the excellent possibilities this short could venture, but then I'm disappointed as the film takes a left turn into Satanic Panic territory. There's a fine, thin line that this subgenre has, and it's quite easy to create something cheesy. Sadly, Born of Sin crosses that line, and even goes so far as to say that the mother is the real monster out of the two parents. Pass.

Home Education is a very strange film. Sinister undertones suggest classic influences of British horror cinema, such as The Wicker Man. Like the best of its ilk, Home Education offers top-notch acting and a weird story. A girl who's homeschooled by her strange mother in esoteric ways finds her father dead and already rotting in bed. Not for the squeamish, this film about the possibility of resurrection and obsession with cleanliness is a concoction of squirming insects, dead things, and viscera.

One of the best of the bunch, The Peculiar Abilities of Mr. Mahler brims with excellent cinematography and acting. It focuses on an investigator in East Berlin in 1989. Like Sherlock Holmes, Mr. Mahler's sharp observation skills allow him to see what other investigators can't. In this case, he deducts what happened to a missing child during political strife in Germany. Not many shorts can offer the type of suspense within (mostly) one location, but Philipp is accomplished --- with a budget to match.

Do you feel this content is inappropriate or infringes upon your rights? Click here to report it, or see our DMCA policy.
Fantasia 2017short FilmSmall Gauge Trauma