Review: MAUDIE, Art and Beauty in the Smallest Places 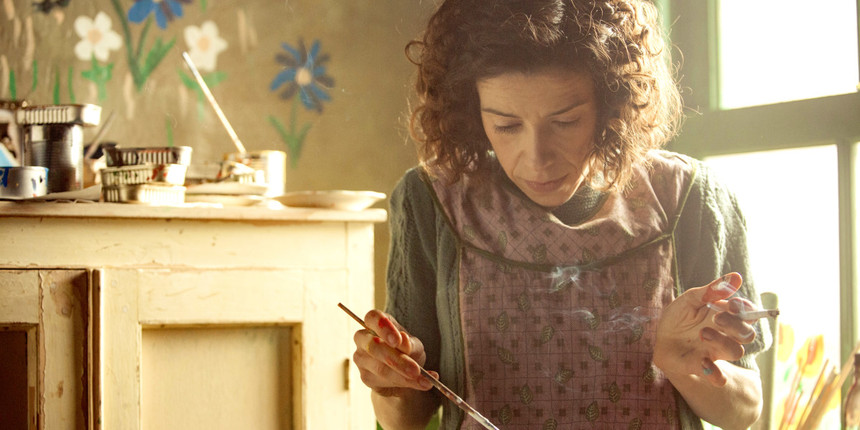 Biopics of visual artists are (or can be) some of the more interesting of that mode of film: it's fairly simple to show a painter creating their work, or show the inspiration for that work. Too often, artists who are depicted for the big screen tend to be of the more flamboyant sort, or ones who lives are filled with glitz, glamour, drugs, and sex.

I doubt many people outside of Canada are familiar with 20th century folk artist Maud Lewis; in Maudie, director Aiisling Walsh and writer Sherry White bring to quite but riveting life the story of an artist whose seemingly quiet outer life belied the richness of her imagination, seen through her artistic expression.

Maud (Sally Hawkins), whose childhood rheumatoid arthritis have her treated badly by most around her, is left by her brother at the her Aunt's, with little direction or freedom in her life. Maud answers an ad from Everett (Ethan Hawke), a gruff, insular man who lives outside of Digby and is looking for a hosuekeeper. Maud moves in, and the two form a strange yet deep bond, while Maud begins to explore her artistic talent.

Options for Maud, in 1930s rural Nova Scotia, are somewhat limited, and limited more by even her own family's negative opinion of her. Luckily, Walsh and White write a story that shows sentiment without getting maudlin. Hawkins shows, perhaps a naive, but still a quietly strong woman, aware of certain limitations and sacrifices, but still determined to carve out a life for herself.

Maud knows she can't expect too much from life, so she finds joy through her determination, and finds her joy in art. This is a fascinating process to watch: finding herself living in a tiny house with a rough and angry man, she finds a can of paint and begins to draw on the walls, and slowly, day by day, brings colour into her life and his life. This is paced out deliberately, and Walsh keeps us aware of the space: the tiny space, at first dark and dank, in which Maud lived and still found a way to thrive, with little or no score so that we feel a part of each of these moments.

The only other spaces scene in detail are the outdoors that Maud viewed and painted: the fields in summer and winter, the walk to and from town (several miles, which would have been extremely difficult for Maud, to the point where Everett, over time, lets her ride in the wagon he pushes). Maud's artwork might seem 'juvenile' to some, but at worst it is simply untrained, and Walsh and Hawkins bring out Maud's unique view of life and her world with grace. Beaituflly shot by Guy Godfree, the story shows how much light Maud found in the darkest of corners.

This is truly Hawkins' finest performance to date. Arguably, she perhaps underplays the severity of Maud's disability (a brief bit of news footage at the end of the film shows how badly crippled she was), but strives to show how the artist found her quite happiness, even as the odds were stacked against her, and she endured hardship from family, and Everett, for so long before finding some small success. Hawke performs admirably as well, but argubaly isn't able to play elder years well, though he manages to elicit some sympathy despite his character's sometimes nasty behaviour and obvious jealousy of his wife's success.

Mostly aimed at those familiar with Lewis' work and an older arthouse film crowd, nonetheless, Maudie is an understated yet strong look at the kind of artistic life, the oursider artist life, that would not often make it to the screen. One without glamour, but with a great deal of heart and life.

The film opens in select theaters in New York and Los Angeles on Friday, June 16, via Sony Pictures Classics, before expanding further in the coming weeks.

Do you feel this content is inappropriate or infringes upon your rights? Click here to report it, or see our DMCA policy.
Aisling WalshEthan HawkeKari MatchettSally HawkinsSherry WhiteZachary Bennett