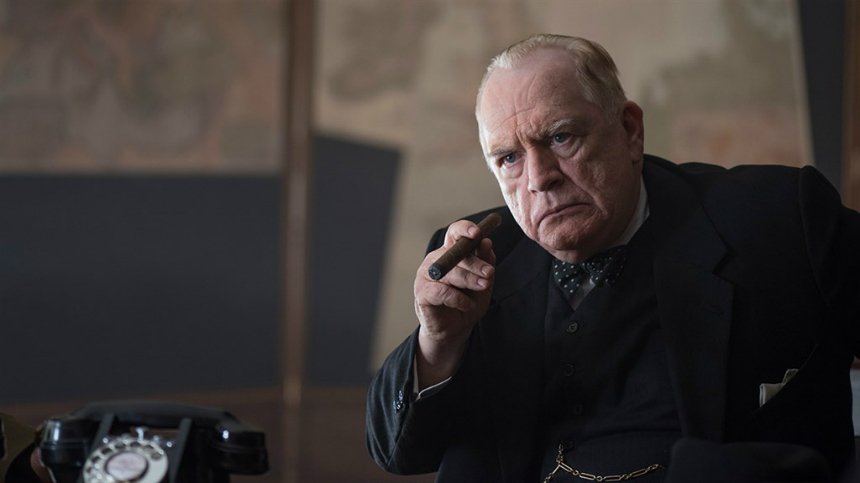 Years of warfare have taken their toll on the old lion.

Beginning one week before D-Day is set to launch in June 1944, Churchill finds the British Prime Minister (and Minister of Defence) haunted by an epic military failure during the Great War three decades before that cost many lives and scarred his psyche permanently. An early tirade in front of King George VI (James Purefoy), Allied Supreme Commander Dwight D. Eisenhower (John Slattery), and British General Bernard Montgomery (Julian Wadham) thus sets the tone for Churchill's reasoning.

In his mind, history will inevitably repeat itself. Who else will protect the thousands of young British soldiers who will inevitably die in the planned invasion? He must act to prevent this atrocity! He is adamantly opposed to the battle plans that have been drawn up and proclaims his opposition in full voice.

And what a voice! As embodied by the great Brian Cox, Winston Churchill is a fearsome force of power. At 69 years of age, it is not Churchill's stout, bowed physical appearance that is imposing, it is his sheer thunderous presence, which he summons up to become a giant among men, whether he is barking out orders to his latest secretary, a meek young woman named Miss Garrett (Ella Purnell), or arguing with mighty military leaders.

Those leaders are arrayed in opposition to him; Eisenhower and Montgomery are at the end of their patience and can barely tolerate his presence. Churchill's military advisor Alan Brooke (Danny Webb) and longtime friend Jan Smuts (Richard Durden), who are quieter and more respectful, yet no less firmly convinced that Churchill must listen to reason. 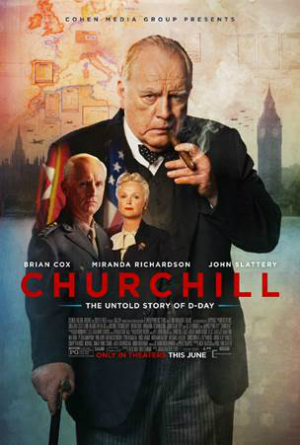 As depicted in the screenplay by Alex von Tunzelmann, Churchill feels left out. He became prime minister in 1940, some months after Britain declared war on Germany and took an active leadership role as Minister of Defence, but after the U.S. entered the war, his military role was reduced. Motivated by genuine, humane concern and a core belief that fires his soul, he refuses to back down, even though his authority is limited.

Brian Cox turns the volume up to 11 almost immediately. His sonorous voice charges the movie with electricity; it sounds like God is speaking, and you're in trouble.

Somehow, Cox still sounds entirely natural; it never feels like a performance, per se, more like an enlarged style of speaking that fits the man and the moment. He's enraged, or excited, or enthused, and he pulls all the air from whatever room he's inhabiting and forces it out through his throat and his mouth.

His dear, beloved, loyal wife Clemente is portrayed by Miranda Richardson with her own distinctive force. She slices through his bluster with well-chosen words that pierce his defenses and cut him to the quick, occasionally leaving him speechless that she would dare to speak to him in such a manner.

The supporting cast is strong; John Slattery stands out as the American among the group, but, like Cox, he doesn't overdo his embodiment of Eisenhower. Ella Purnell is mostly left to react with astonishment at Churchill's frequent outbursts, though she nails her sole opportunity to express her opinion.

Jonathan Teplitzky directed the stately and respectful The Railway Man a few years ago and has been busy helming episodic television since then. Whether it's largely due to Brian Cox's magnetic, compelling performance or not, Churchill feels like a definite step up from his previous feature. Veteran film editor Chris Gill (War on Everyone) gooses the pace and there's barely any down time, so that's a factor as well.

Even for those well-versed in the historical and military accounts, Churchill is a must-see movie in order to bask in Brian Cox's magnificent, empathetic performance. The fact that (eventually) he delivers a stirring speech almost feels a cherry on top.

Do you feel this content is inappropriate or infringes upon your rights? Click here to report it, or see our DMCA policy.
Brian CoxJohn SlatteryJonathan TeplitzkyMiranda RichardsonWinston Churchill