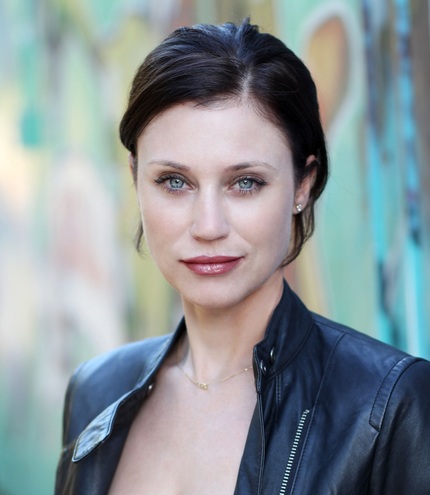 When it comes to vigilante justice, men aren’t the only ones looking for an eye-for-an-eye. The newest bad-ass anti-heroine to hit the screen on the indie scene is actress Megan Henry.

Currently, Megan stars in the short film “Guardian Angel,” an action-packed thriller which recently earned a Platinum Award at WorldFest Houston and is heading to Phoenix Comic-Con next. Megan executive produced the project which centers on a strong and unconventional female character.

This multi-talent is also in-development as producer and star of the new military action-thriller series Accelerate, teaming up with CLIO winning director/writer Marcus Perry. In addition, Megan is on-board as co-executive producer of the festival bound short "Good Guys with Guns"; and associate producer on the feature film "Turnover."

Can you tell us about your action drama short “Guardian Angel”?

Megan: “Guardian Angel”, is about the quest for justice. Maddie, is an unlikely hero in a dark and dirty world who believes she is God’s chosen warrior to exact vengeance against those who harm the innocent.

What made you want to take on such a bad-ass role?

Megan: Doesn’t everyone want to channel their inner bad ass? And in a corset I might add. HA! FOR ME THE GREATEST HUMAN URGE IS TO FEEL IMPORTANT and I am fascinated by the lengths people go to attain it.  For many, achieving self-importance in their own consciousness is sufficient and others crave recognition from the masses. There have been many moments in my life where I wanted to approach a situation with reckless abandon but felt it was an arrogant endeavor. It was thrilling to tap into the character of Maddie, who thinking she has God’s endorsement, is haughty and unapologetic in her perceived mission and is the ultimate archetype of self-importance.

Any tough moment’s on-set while shooting, either personally or otherwise?

Megan: The first day of shooting the equipment was several hours late. Oops.

It’s been winning awards on the festival circuit, why do you think it’s resonating so well with audiences?

Megan: Well the costume of course – LOL. I think the converging of religion and justice, which to me is  a nebulous construct, has been a fascination since time immemorial. You could argue the current trend among many is to decry religion while there will always be elements of societies that are pious and zealous in their belief in literal interpretations of the bible. Both stances supporting narrative and this film provoke that conversation in a comic book setting.

You’re also in a couple other films that have been earning high praise as well, how’s that feel?

Megan: I am full of gratitude and it feels incredibly gratifying to be involved in projects that are provocative, entertaining and resonate in some capacity. The audience wants an experience, even if uncomfortable at times and many want to relate to stories that validate their experience. As films have the power to provoke, unify, deconstruct and equalize it feels like these in particular have a finger on this pulse.

Overall, what’s been the biggest piece of advice you wish you would have followed?

Megan: I’ve learned the hard way that you cannot control timing or other people. I have since embraced this universal tenant and I no longer feel frenetic, discouraged or uncertain. This may sound esoteric, but when we constantly feel ourselves in alignment with our desired position along with diligent action, the universe unfolds accordingly, in divine order of course. We expense so much energy worrying about the ‘when’, that often times are ‘why’, is forgotten. Our motivation should always be the driving force over an often times self-imposed arbitrary deadline which sets us up for defeat. I was stuck in a mental loop of urgency which stifled my creative impulse and drew me to projects that were simply next on the docket. Now I am emboldened to create and pursue projects that feel impactful and inspired irrespective of timeline because I am not working against a clock.

Megan: Oh, great question! I have seen tremendous results with regard to my trajectory once I learned to let it go! Adopt the mantra!  We forgot to stay open to the magic of life when we are so married to an end result. Yes, I am attached to my path of storytelling but open to all the different ways in which that manifests. We stifle the process of divine timing when we are constantly waiting for specific results. Often times, the results are grander than we ever could have imagined. It is imperative to continue to take applied and inspired daily action steps and then mentally detach. Be patient. Trust.

Did you ever think about giving up on your career and what stopped you?

Megan: I never felt like giving up as I’ve always been inclined towards acting, or storytelling as I like to refer to it, but there were many times I wondered how to better navigate.  I started working differently and creating my own content affords me a platform. Art has a unifying pulse and I’ve always been drawn the magic of filmmaking.

Lastly…where do you go from here?

Megan: I am very excited about an action/sci-fi series that is in development. We really up the ante and my character is extremely conflicted which is always delicious. I am co-writing several TV pilots and a short film I produced is gearing up for the festival circuit. And of course, channeling my inner bad ass.