Tribeca 2017 Review: THE CIRCLE, Where All Are Trapped in the Social Media Web 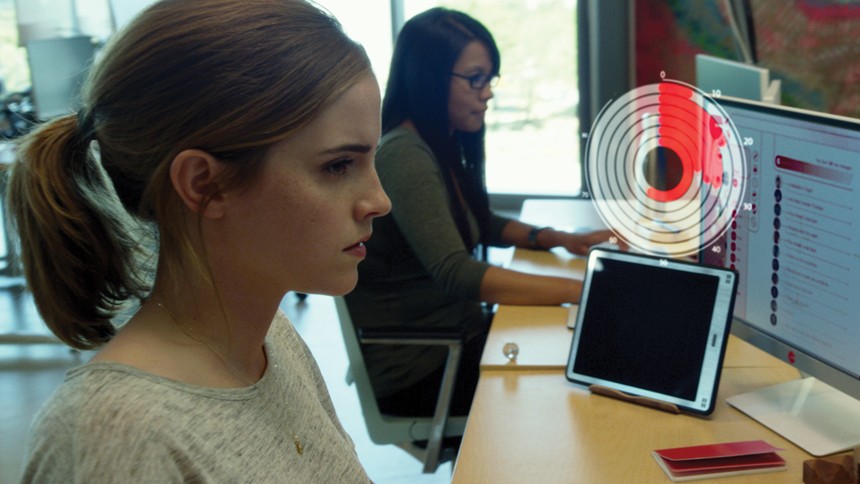 The subject of our hyper-connected, social media-based cultural landscape is a fruitful and relevant one for filmmakers, and one with great potential for mass audience interest, given how pervasive this is in our daily lives. David Fincher’s Facebook origin story The Social Network can be looked upon as the gold standard of this sort of film, its paranoid thriller elements fitting well with the real-life dystopian aspects of the corporate encroachments and privacy erosion that are seemingly inescapable hallmarks of our constant online presences.

The latest film to tackle this very large subject is The Circle, directed by James Ponsoldt (The Spectacular Now, The End of the Tour) and written by Dave Eggers, based on his 2013 novel. The protagonist is Mae Holland (Emma Watson) who, with an assist from her best friend Annie (Karen Gillian), escapes her dead-end customer service job and lands a much more lucrative position at The Circle, a powerful social media company (an obvious Facebook analogue).

At the Circle, Mae is essentially doing the same work as she was before, but now she’s got a fancier title (her department is in “Customer Experience”), and is now in a chill college campus-type environment, where her co-workers hang out on the lawn, play games and practice yoga. Everyone seems friendly and super-supportive, and this vibe is reinforced by the weekly company pep-sessions led by CEO/Circle co-founder Eamon Bailey (Tom Hanks), who uses these company-wide meetings to excite the workers and introduce new products and initiatives.

At the first session Mae attends, Bailey unveils a new feature called “SeeChange,” which consists of tiny circular cameras barely bigger than marbles that can be easily implanted anywhere, which not only transmit extremely vivid images, but impart information on atmospheric conditions and data on every visible person and object in the frame. Bailey emphasizes the potentially revolutionary impact this can have on activists and those suffering human rights abuses all across the globe, and how dictators and other abusive authoritarian figures will soon be no longer able to act with impunity and in secret.

Despite the fact that now Mae’s working at a place where she’s happy, for a company that seems to be doing work genuinely beneficial to humanity, discordant notes of disquiet are disturbing her bliss. The long hours of work are keeping her away from her home and family, where her father (Bill Paxton, in one of his final screen roles) is battling MS, putting a considerable financial and emotional strain on all of them. Mae’s work also alienates her from her childhood friend/ex-boyfriend Mercer (Ellar Coltrane), who is completely opposed to the nature of the corporation Mae works for.

At work, the stresses of the job on Annie are becoming alarmingly visible, making Mae fear for her friend’s health. Also, two bubbly co-workers cheerily chide Mae for not making every detail of her life visible to everyone in the company, as well as the general public. These co-workers reinforce the disconcerting emphasis on total transparency demanded by the corporate culture of the Circle, as well as giving off a disturbingly cultish vibe. Finally, Ty (John Boyega), a co-worker with access to the secret archives where all the massive amounts of data gathered by the Circle on their customers’ personal information is stored, confides with Mae his concerns that the Circle's do-gooder public image is hiding a much more sinister use for all this material.

Tom Hanks jokingly remarked at The Circle’s world premiere at the Tribeca Film Festival that he hopes the film inspires arguments that would lead to fistfights between those with opposing opinions. While this is an unlikely post-screening occurrence, the film certainly raises provocative ethical questions related to the consequences our constant connectedness. However, it addresses these concerns in a way that only skates the surface of its issues and never actually deals with these in any real depth.

The film’s biggest problem in this respect is that Mae’s shifts in character – even though Watson performs quite well – never feel quite believable as written. Mae changes from green, wide-eyed rookie, to skeptical observer, to a true believer – who willingly subjects herself to a 24/7 Truman Show-type worldwide broadcast of her every waking moment – and finally to a sort of a corporate revolutionary. But all these character changes always feel theoretical and mechanically plot-motivated, rather than emotionally real.

The Circle is always blindingly obvious, almost to the point of didacticism, about its critiques toward the global social-media world it depicts. Even so, its denouement feels too neatly wrapped up, despite its teasing ambivalence about whether human liberation has been achieved, or if its characters have been transferred to a larger and less visible sort of prison. (Incidentally, the ending of the film adaptation has been significantly changed from Eggers’ much more downbeat conclusion to his original novel.)

Despite all this, The Circle still has some positive things going for it. Ponsoldt, invaluably aided by Matthew Libatique’s elegantly sleek, gleaming cinematography, comes up with a lively visual analogue to Eggers’ text, complete with floating bits of online activity and users’ comments (although considerably more sanitized than they would be in real life).

The performances are quite fine across the board, even though the characters themselves are rather thinly drawn. Watson finds some potent emotional notes; Hanks’ typically avuncular presence adds some intriguing wrinkles to a character that could be easily stereotypically evil; Patton Oswalt, as the Circle’s COO, convincingly plays smarmy; and Bill Paxton’s recent passing, too tragically soon, is a poignant reminder of what a reliably accomplished actor he was.

The Circle contains some intriguing ideas, as well. Notwithstanding the Circle’s Orwellian corporate slogans – “sharing is caring,” “secrets are lies,” “privacy is theft” – the film’s dystopian vision is much closer to Aldous Huxley’s in Brave New World. The Circle posits that we have become willing slaves to near-total surveillance of our online and personal activities through our desire for convenience and instantly attainable interpersonal connections.

Ultimately, however, The Circle suffers from the same weaknesses endemic to social media itself: grappling with important issues, but doing so in a way that flattens out much of the complex nuances, and encourages superficial snap judgment rather than considered debate. In the end, the film provides some food for thought, but not quite enough for a satisfying meal.

The Circle opens in theaters on April 28.

More about The Circle