Review: THE FATE OF THE FURIOUS Hits the Accelerator

Vin Diesel, Dwayne Johnson, Jason Statham, Charlize Theron, Kurt Russell and Michelle Rodriguez strap in for another round of fast and furious action. 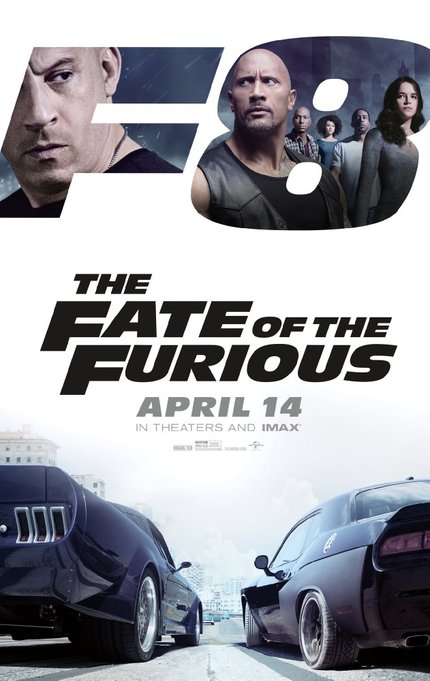 Vin Diesel and his gang are back for yet another round of supercharged ridonkulousness with The Fate of the Furious, the eighth film in the ever-expanding, infectious cars and crime franchise.

Like a boisterous but fun relative who keeps rolling around to the door, a new Fast & Furious movie has become a bi-annual expectation at this point; their popularity seemingly pushing the needle forever further and further. In turn, so too are the characters, in their own tricked-out vehicles of choice. (What would a F&F movie be without a wish fulfillment scene of the protagonists picking out the world's coolest cars, then driving them, maybe trashing them?)

The whole crew is back, led first by Diesel's street racing Robin Hood, Dom Torreto and then by Dwayne "The Rock" Johnson's supercop, Luke Hobbs. Also returning to their respective passenger seats are Tyrese Gibson, Chris "Ludacris" Bridges, Nathalie Emmanuel, Elsa Pataky and Michelle Rodriguez. To varying degrees, they're all loyally fulfilling their required Sulu/Chekhov/Uhura dynamics: Flying the ship, staying out of the way, stepping up when needed, and reacting to bigger things. They all have a noteworthy token moment or two, while Rodriguez bears the brunt of selling the weight of the plot's drama. She does it well.

Jason Statham's role grows this time around (don't think too hard about his murderous past) and his character's brother (Luke Evans) gets to join the action. The action is satisfying and swift, if busy and disposable. Basically, it's in keeping with the competent momentary thrills of all the recent F&F films. 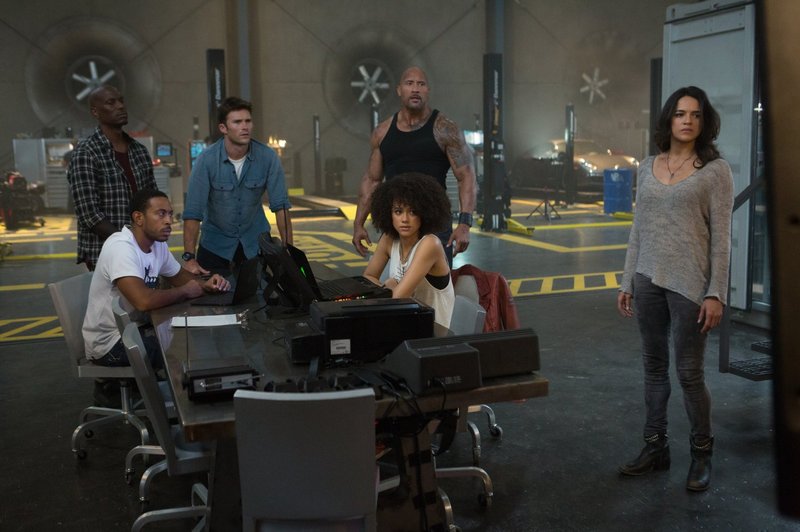 Director F. Gary Gray (Straight Outta Compton, The Italian Job remake) steps into the ringmaster role, effortlessly juggling all the balls he's been tossed. Fate of the Furious falls right in line with the previous work of Justin Lin (parts three though six) and James Wan (part seven). The result is the best film of the series since the course-correcting Fast Five. In short, it's got all the tremendously expensive nonsense and over-the-top globe-spanning spectacle we've come to expect, but upping the all-around ante while mercifully simplifying the plot. (A stolen nuke! A hero gone rogue! Must reset the status quo by the end! 3,2,1 - GO!!)

The first race in the movie, through an unduly sexy Havana, hinges on Toretto and his longtime love and new wife Letty (Michelle Rodriguez) having modified the car he's driving with highly volatile compressed chemical canisters. For good measure, he tears off the hood and doors right before the race. If it doesn't hum, spin or burn, it's out! It'll only weigh him down, baby.

The opening race is rightly thrilling, with a button at the end to demonstrate what a swell guy Toretto is. Which is paramount to laying down the stakes for the twist that's to come. It's all properly standard screenwriting, and also helpful to anyone watching who hasn't seen the other seven movies. What, pray tell, would it possibly take for this man to betray his "family"?

Kurt Russell, returning as expository government black-ops guy Mr. Nobody, is the very embodiment of authoritarian snark in a suit, and nothing else. He's basically hanging around with a smirk on his snerk. Scott Eastwood joins him as his new by-the-book assistant who needs to learn to break the rules.

Helen Mirren makes her heretofore unlikely F&F debut as the mother of an established character. Her scenes are quick and kind of fun, and probably all shot in an afternoon. These actors are nice to have around, but in a Hollywood that has no idea what to do with aging former leads, being poured into transparent prestige-boosting mini-roles in spectacle driven franchise pictures such as this seems to be the best they can hope for. I do hope they enjoy their paychecks.

Charlize Theron, another big name newbie to these parts, makes out with far more screen time and plot vitality. Also, her thin dreadlocked hair extensions are something to behold. That said, most of her time is spent slanking around her dark helicarrier-like base of operations and sitting in front of a busy computer console. As the villain of the piece, she's an effectively evil femme fatale for the global tech age.

High speed chases still break out everywhere our heroes go, but ultimately, it always seems to come down to someone clickity-clacking on a keypad, zooming around with a mouse, or swiping the right motherboard. Nevertheless, the movie survives on the strength of its knowing sense of its own nuttiness (the best, craziest scene in the movie is a "top this!" moment smack in the middle brought on by some wicked hacking) but we're reaching the point of saturation.

Of all these people, dare I say that the only make-or-break name in the cast is Diesel. Vin Diesel is truly one of the gloriously weirdest movie stars of all time. He's a most formidably unique screen presence with almost zero range. With his steely eyes and doughboy demeanor, he could crack your jaw one moment and burst out sobbing the next. His very ethnicity is undecipherable, his voice in a register all its own.

At this point, F&F is all we care to see him in. We don't want to see any more of Riddick, and we do not want to see him as Agent xXx. Remember that time he put on a bad wig and starred in a Sidney Lumet movie? Interesting. But no to that, as well. Yes, we'll take him voicing a talking tree in Guardians of the Galaxy. But when it comes to full-on Vin Diesel performance, it's basically Toretto or bust. Good thing for him that these movies absolutely need him, and Universal Studios needs these movies. And good thing for all parties that they've become enormous, surefire event pictures.

The reason for the Diesel/F&F synthesis is one that is as simple as the franchise itself needs to be: the Fast & Furious movies are, at their core, hard-hitting actioners on the surface with a tender center that's not afraid to reveal itself, sometimes simultaneously. They're big and loud and colorful and sometimes overcrowded, but doggonit, they're also the silly comic book soap opera we can't stop buying.

The lack of obvious self-irony may be too much for some critics and audience members, but the makers of these films know what they've got under the hood. As they won't let us forget, we don't abandon our family. No matter how crazy it is.

Do you feel this content is inappropriate or infringes upon your rights? Click here to report it, or see our DMCA policy.
Charlize TheronDwayne JohnsonF8Fast and the FuriousMichelle RodriguezThe Fate of the FuriousVin Diesel

More about The Fate of the Furious