James Franco directed and stars in THE DISASTER ARTIST, which dramatizes the making of Tommy Wiseau's THE ROOM. 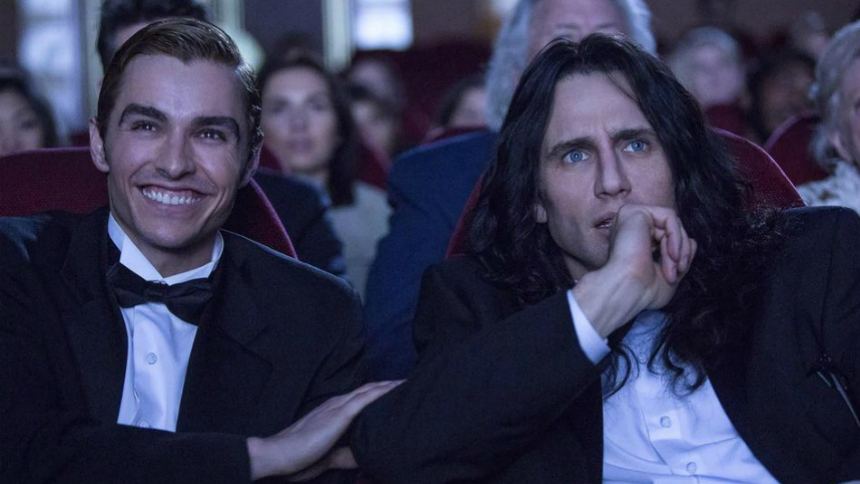 I think we were all pretty skeptical upon hearing the announcement that James Franco would be bringing the story of the making of Tommy Wiseau's The Room to the big screen over three years ago; at least those of us familiar with the wonderfully terrible film of cult infamy.

For over a decade, sold out audiences have enjoyed Rocky Horror-like participation consisting of hilarious traditions such as screen-shouting, football playing, throwing spoons at the screen, rooting on the shockingly long establishing pans of San Francisco, and generally laughing hysterically at the film’s clunky pseudo-Tennessee Williams dialogue, confused performances, and bizarre plot twists, like the mother-in-law character whose breast cancer ought to play like it matters a great deal, but really comes off as a non-sequitur.

The Room’s audience is a devoted lot and the idea of Franco taking on the starring role of the filmmaker with the mysterious origin story - an ambiguous age, accent, and source of bottomless wealth to finance the project and its endless takes - may strike some as tampering, but rest easy. Not only is The Disaster Artist Franco’s greatest directorial work, which I realize isn’t the compliment it could be, but it’s also his finest performance... and that is saying something. That being said, I remain a big fan of his other highly underrated docu-drama (sort of), Interior. Leather Bar - a work that imagines the 40 lost minutes that may have rescued William Friedkin's ill-advised Cruising - and it’s nice to see what’s become of his penchant for investigating failed filmmaking, or: good cinematic intentions gone wrong.

With the aid of truly excellent makeup, Franco faithfully portrays Wiseau, not only with on-point skill, but admirable empathy. It’s hard to say what Wiseau was driving at with his directorial debut, aside perhaps from portraying feelings of personal betrayal in the most dramatic terms in his arsenal; a reminiscing of his teenage days acting in school productions of Shakespeare or Williams. In The Room, Wiseau brings us Johnny, a cool modern embodiment of the angst of James Dean. Things happen, or often don’t happen, without apparent reason and what exact room he’s referring to is hard to say exactly. Is it the living room? Is it the steamy bedroom, where Tommy gifted his bare ass to the world in the least flattering light, for an unsettlingly long time.

The Room consists of a delightfully random batch of characters, like the psychologist friend, who enters unannounced mid-film, as if he’d been there the whole time. Therefore, one of the great joys of The Disaster Artist is its ensemble cast that brings to life the lifeless. The random psychologist is subtly recreated by the similarly slender Nathan Fielder, who may be the funniest person in this extremely funny cast. Seth Rogen, who produced the film, dryly captures a camera operator who is not alone in his surprise in finding Wiseau’s paychecks to be legitimately cashable. There is also much fun to be had in spotting the countless cameos along the way, the funniest being Zac Efron, who plays the ‘actor’ who plays the intimidating roughneck with the humorously non-frightening name; Chris R. Who is the other Chris warranting a last name initial distinction?

One would think that James F. as Tommy Wiseau is The Disaster Artist’s titled protagonist, but the story is actually told through the eyes of Greg “Babyface” Sestero, played by James’ brother, Dave F. Fans will know Greg as The Room’s, Mark (“Oh, hi Mark”), and it’s his book that acts as the film’s real source material. Screenwriters Scott Neustadter and Michael H. Weber, known for smart love stories like The Spectacular Now, have done a phenomenal job not just adapting the story’s absurdity, but far more so, its heart. For as much as the film delights in The Room’s bizarre splendor, at the end of the day, it's more interested in a tale of outsider ambition and friendship.

The Disaster Artist deservingly stands in the great tradition of films about filmmaking, both doc and docudrama. One is understandably quicker to compare it to great docs like American Movie or Best Worst Movie than, say, Hearts of Darkness, but really it's closer to five star docus like Tim Burton’s Ed Wood or Mario Van Peebles’ Baadasssss. Like all of the aforementioned films - and let’s certainly not forget Burden of Dreams - while you don’t need to be as acquainted with these films as their obsessors, context certainly will aid in your enjoyment. If you are planning on seeing The Room, as this film will surely inspire many to do, it is more than worthwhile to seek out a theatrical screening in your town. Despite Wiseau’s hard-hitting dramatic intentions, The Room is a film that provides shared happiness and joy

Wiseau has been touring The Room for some time and it’s always been complicated deciphering to what extent we’re laughing with vs. at the filmmaker. But rather than jumping on the making-fun aspect of our fanhood, Franco finds a kindred spirit in Wiseau and approaches the material with a knowing sense of what it's like to dream big, and also what it's like to have big dreams become the object of ridicule. The Disaster Artist is not only far funnier than you might expect, it’s also far deeper than a film about the worst movie of the 21st century has any right to be.

Do you feel this content is inappropriate or infringes upon your rights? Click here to report it, or see our DMCA policy.
Dave FrancoJames FrancoNathan FielderSeth RogenThe Disaster ArtistThe RoomTommy WiseauZac Efron

More about The Disaster Artist