It's hard to find a film festival these days that doesn't feature some sort of VR/AR programming and the tech-heavy SXSW is of course no exception. In fact, the festival featured a spin-off "convergence" program that was open to both film and interactive attendees. This included a couple ballrooms converted into VR arcades and three days of panels focusing on various VR-related topics. As is common at most festivals, these VR-related topics tend to be pretty similar to one another. That's not necessarily a knock on the fest or the panels, but does further suggest we are just at the very beginning of our VR narrative journey.

The setup of the VR exhibition space was neither particularly innovative nor lacking elements to make it work well. The space was dark and had a tall ceiling and felt more like the space at Tribeca last year than either New Frontier space of the last two. However it was more spacious than Tribeca's space and felt markedly less crowded with each booth having plenty of room for the largely room-scale-centric program. 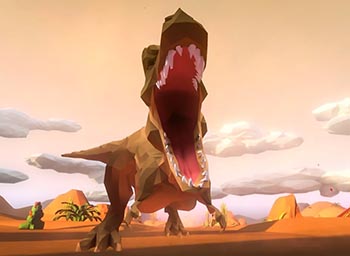 That program was a good mix of recent hits and a few world premieres. On the recent hits side, three Sundance notables were on the display. Tyler Hurd's champagne cat deity party explosion music video Chocolate was, again, a real crowd-pleaser. This time Hurd employed a subwoofer backpack to really bass-up the experience. Chris Milk and Aaron Koblin's Life of Us (pictured) was back as well. This experience lets two people interact in VR as they experience evolution on Earth. The SXSW space featured a gigantic set of screens so those wandering through could look on. And Felix and Paul's highly lauded piece Miyubi also made a stop in Austin. At a whopping 40 minutes, this is the most advanced VR narrative to date and puts the guest into the body of a toy robot in a 1980s family. 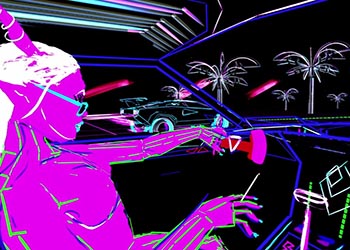 Of the VR pieces making their debut at SXSW, the most impressive was probably Show It 2 Me by Titmouse Studios' Mark Brooks and Dylan Carter. This psychedelic music video for Night Clu's song of the same name takes the viewer on a neon 80s-inspired ride with a demon woman. All of the Vice City-esque elements were created in VR in Google's Tilt Brush software and then placed into Unity where a world was built that could shift gravity to the creators' desires. It's a cool experience that will be awesome to revisit.

As far as the panels went, none disappointed at all but the highlight was probably the Felix and Paul masterclass. The two VR pioneers responsible for such experiences as the Nomads series and the Jurassic Park piece went into incredible detail on their creative processes discussing script writing, capture, and compositing. Whereas many panels tend to take the 50,000 foot view of where the industry is headed, it was excellent to hear specifics on how people are making VR right now.