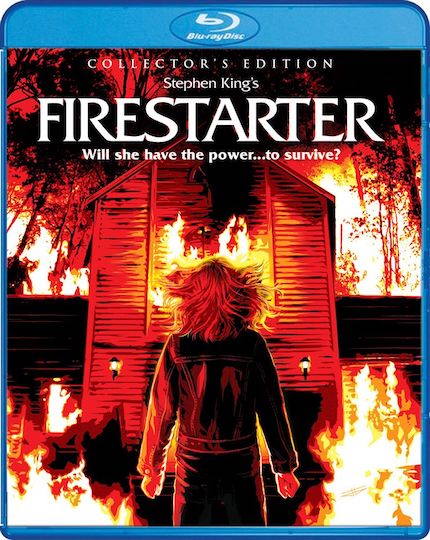 Directed by Mark L. Lester, the new Scream Factory Blu-ray release of Firestarter is hot stuff, indeed. Starring David Keith, George C. Scott, Martin Sheen, and Drew Barrymore in one of her first roles, Firestarter is a Stephen King adaptation of Andy and Charlie McGee, a father and daughter on the run from the "men in black" of The Shop. As part of a clinical trail, Andy (David Keith) developed psychic and telekinetic powers. He also met his future wife (Heather Locklear) in that group, and they had little Charlie (Barrymore), who inherited Andy's skills, but who is a thousand times more powerful --- and dangerous.

The government goons at The Shop have killed tortured Vicky to death in search of Charlie, and as a result, Andy and Charlie are on the run. Along the way, Andy mind-trips people into helping them, whether it's making a cabbie see a $500 bill instead of a dollar, or mentally forces a pay phone to release the quarters within it. Charlie's powers are far more destructive. She can read minds, but more importantly, she can set things --- and people --- on fire at will. Many men fall afoul of her and its fun to see them run screaming in flames. George C. Scott plays an extra-scummy assassin, and Martin Sheen is still a bad guy, but perhaps a bit less of a psychopath than Scott. The finale is spectacular.

Scream Factory has hit another one out of the park with this release: Firestarter looks and sounds great. I hadn't seen Firestarter in a long time, and I'm happy to say that the film holds up. King's source material is fantastic, of course, and while some King purists might have an issue with adaptations of his work, I love this film. It's got a great pace, an all-star cast, special effects that hold up, and masterful stunts.

One of the extras on the disc is an in-depth interview with stuntman Dick Warlock. There are also inteviews with director Lester, actors Freddie Jones and Drew Snyder, and Tangerine Dream's Johannes Schmoelling. Fans of electronic superstars Tangerine Dream will love Schmoelling's live performance of "Charlie's Theme."

Firestarter is out on Tuesday. Check out Scream Factory's Firestarter page and the trailer below.

Do you feel this content is inappropriate or infringes upon your rights? Click here to report it, or see our DMCA policy.
David KeithDrew BarrymoreFirestarterGeorge C ScottHeather LocklearMark L LesterMartin SheenStephen King