Boston Underground 2017 Review: BITCH, A Hilarious and Vicious Bite at the Patriarchy 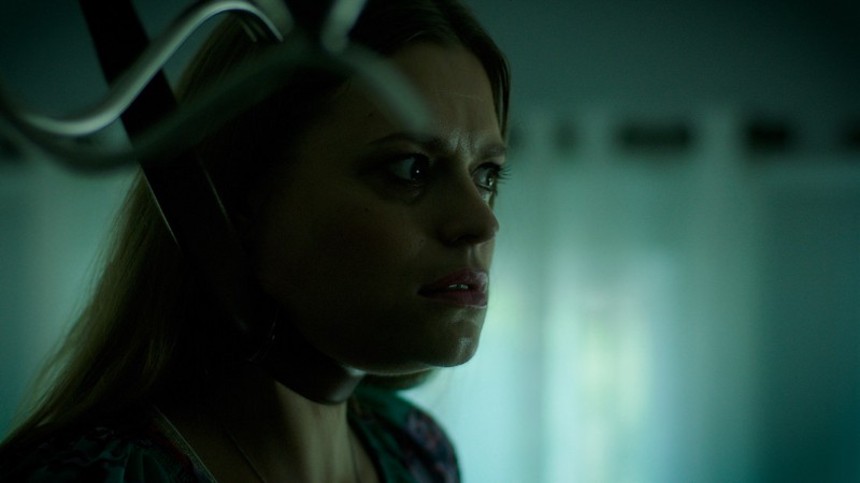 I doubt you would ever meet a woman who couldn't tell you about how, on a near daily basis, she must endure being dismissed, ignored or mistrusted by men. According to many, we are oversensitive, we exaggerate, we just 'need to relax'. The nature of this mistrust of women is so pervasive, especially in western culture, that most men (even those who consider themselves feminist) don't even realize that they are a part of it. And so when women act crazy, maybe, just maybe, she was trying to tell you something for a long time, and you didn't listen.

This is something of a starting point for Marianna Palka's fourth feature film, Bitch. Palka takes the 'title' role of Jill, a housewife and mother of four children, who is so lost and overwhelmed in these roles that in the opening scene, she tries to hang herself from the dining room chandelier. She does so appropriately with her husband's belt; Bill (Jason Ritter) has long since abandoned any husband or father duties save that of providing money, so he can spend more time working (and cheating on his wife) at the office.

Every time Jill tries to tell him that she needs help, he just tells her she needs to sleep. Meanwhile, a strange dog keeps circling the house. And so one morning, Jill just disappears inside herself, and lets the Bitch out. Having been treated as little more than a pet by her husband, that's what she becomes. But no friendly Fido: this bitch snarls and bites at anyone who comes near, even her own children. It might seem more than a little funny, until you realize what you would be laughing at: a woman's complete psychological breakdown as a direct result of a society that sees her as having no value other in her domestic role.

Ritter might seem to be exagerrating Bill's narcissistic, oblivious nature, but sadly men like these are far too common. The only way he would notice that something is wrong with his wife, is when he has no other choice. And now Bill must finally do what he should have been doing all along, looking after his family. Of course, Bill is completely inept, and it's great to see Ritter engage in some excellent physical comedy. Bill has no idea what schools his children attend; he thinks he can literally throw money at any problem; he's more worried about the family being embarrassed than his wife's mental health; and expects his sister-in-law Beth (Jaime King) to step in as maid and mother).

Palka deftly moves between these two situations. Bill and the children are brightly lit and farcically staged, with some great comedic timing and oddball flavour that can only come from a strong family unit. Jill, in her bitch-state, is dark and shadowed, often shown in close up to hide her human body, giving Palka reign to snarl and drool, to stare at her husband and children with cold animal eyes; when she does move it is truly frightening. Aided by an excellent sound mix and a score by Morgan Z. Whirledge that reflects Jill's inner cries of emotional pain.

The film loses a bit of its energy in the final third, when it turns away from its fantastical premise and more to a family drama (as Bill finally figures out that it's not just about getting your kids to school on time, it's the emotional investment that matters). But in the final scenes between Bill and Jill, Palka beings together the two styles she has been using, in effect giving the characters space to figure out how to bring together their worlds again.

But even with this slightly sentimental conclusion, Bitch doesn't hold back on its direct attack on a kind of patriarchy that still exists despite how far we've come, and its exagerration only lends more to this, never quite allowing its audience to get comfortable or complacent.

Do you feel this content is inappropriate or infringes upon your rights? Click here to report it, or see our DMCA policy.
BitchJaime KingJason RitterMarianna Palka