The Music of ALL NIGHTER: An Interview with Composer Alec Puro 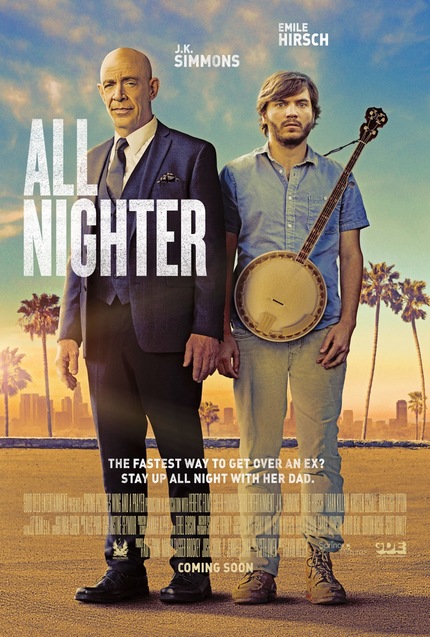 Gavin Wiesen’s follow up to his Sundance hit “The Art of Getting By” is being released March 24 on VOD and is titled “All Nighter”. The comedy centers around a workaholic father (J.K. Simmons) who attempts to visit his daughter (Analeigh Tipton) during a layover in LA, only to discover that she's disappeared, forcing him to team up with her awkward ex-boyfriend (Emile Hirsch) in order to find her over the course of one transformative night. “All Nighter” marks Wiesen’s second collaboration with composer Alec Puro as Puro also scored “The Art of Getting By”. We had a chance to briefly talk with Puro about everything from the scoring process for “All Nighter” to what type of project he would like to score next. Fans of the film’s music will also be able to purchase the score come March 24 when Lakeshore Records releases it. Read the full interview with Puro here:

-One of the storylines in “All Nighter” centers around Emile Hirsch's
character trying to improve his craft of playing the banjo. Since there is
so much emphasis put on music in the film, did this add any pressure on you creating the score?

I wouldn’t say it added any extra pressure but there is always that feeling of uncertainty and excitement when you start on any new project. When we began talking about music for the film one of the first things that came up was if we should incorporate the banjo and a bluegrass feel into the score. Ultimately the director wanted to reserve the banjo sound for Emile's character and have the score be more of an indie, garage rock, retro blues bandy type of score.  We wanted to do a sort of updated sound that you might have heard in some of the buddy comedies from the 80s that had more of a down and dirty bluesy feel.

-Did you help Emile out with learning how to play the banjo or give him any pointers?

Production actually got him a private teacher since learning how to play the banjo is so specific.  He got pretty good and ended up playing a lot of stuff live on camera for the film.

-You also scored Gavin Wiesen's first film “The Art of Getting By.” Were there any big differences in scoring that film as opposed to “All Nighter", besides the genres?

-In one sentence how would you describe your score for “All Nighter”?
It’s kind of a throwback comedic thriller type score ala “Lethal Weapon”, “48hrs”, “Midnight Run” with an indie, garage rock, retro blues band sounding feel.

- Your score for this project definitely amplifies the fast pace of the
film, as the two main characters are on a mission to find someone. Did you realize the magnitude of how important the score would be before starting? If not, when did it hit you.

Yes, 100%!  On this score more than others I’ve composed the pace and drive was so important.  Once Gallo (J.K. Simmons) shows up at Martin’s (Emile Hirsch) house and they proceed to go out and start looking for Gallo’s daughter Ginnie (Analeigh Tipton) the forward momentum of the film kicks off and we don’t stop moving until they find her. It was a lot of fun because the root of the score ended up being super percussive to give it that drive so I got to play drums on all of the cues which I don’t always get to do.

-Are love or fight scenes easier for you to score? And why?

Love scenes are definitely easier to score than fight scenes.  When you score a fight scene there are so many specific beats you need to hit to amplify each moment so it takes a little longer to map it out to hit all the different nuances.

-Your wife is actress Marla Sokoloff. Does she help you understand a
different viewpoint of your craft?

Definitely! The most important thing to me when it comes to scoring is supporting the story with the right compositions and themes.  She is really great at breaking down a scene or a character which has given me a deeper understanding of story and is super helpful.

-What type of film would you like to score next?

It would be fun to score a really dark psychological thriller.  The past few films I’ve scored have been more in the comedy realm so it’s always fun to mix it up.

You can learn more to Alec at www.alecpuro.com.

Do you feel this content is inappropriate or infringes upon your rights? Click here to report it, or see our DMCA policy.
Alec PuroAll NighterComposerEmile HirschFilm ScoreGavin WiesenJ.K. SimmonsThe Art of Getting By