Review: THE COMEDIAN, Not Very Funny Despite Its Title 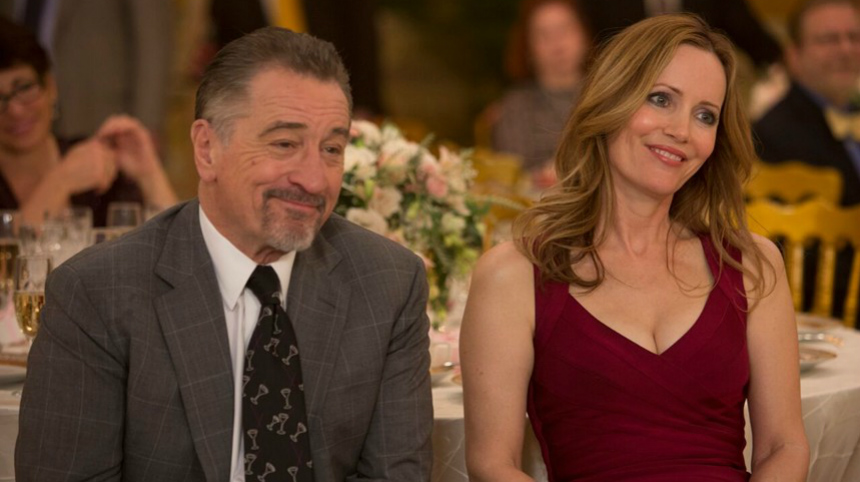 There is a very fine performance embedded in Taylor Hackford’s otherwise enervating, overlong, patience-trying, and not very funny film The Comedian. However, that performance is not delivered by the putative headliner, Robert De Niro. He plays Jackie Burke, a comic who once starred in a popular sitcom, but is now reduced to playing small comedy clubs and participating in “Nostalgia Nights” with similarly faded TV stars (such as Jimmie Walker and Brooke Burke, who play themselves in cameos).

Instead, one of the very few reasons to watch The Comedian is for Leslie Mann, who plays Harmony, Jackie’s eventual love interest (despite an almost 30-year age difference). They meet cute while working at a food pantry, both of them doing community service for similar crimes of physical assault.

Harmony is the one credible character in the film, one who could conceivably be an actual human being, rather than an awkwardly cobbled-together assemblage of hackneyed, paper-thin clichés of characterization, as unfortunately just about everyone else in the film proves to be. Harmony, who ran afoul of the law by knocking out an ex who cheated on her, elicits much sympathy as a woman who’s attractive, smart, and funny, and knows she deserves much more than she’s getting out of life, but somehow can’t quite figure out how to put herself in better circumstances. This lends an edge of pathos and dramatic frisson to some of Mann’s scenes with De Niro, as her eyes well up with tears as she laments how shitty her life has become.

This makes Mann seem to be in a different film altogether, perhaps one far more worthy of her talents as an actress and comedienne than The Comedian. The movie surrounding her is one that’s relentlessly cynical and misanthropic, but mistakes these qualities for acerbic edge.

It’s also a movie that has a particular disdain, bordering on outright hatred, for young people. The credo put forward here looks to be an inversion of the old youth-affirming adage: in this case, it would be, “Don’t trust anyone under 30.”

In this respect, this film very much betrays the age of its creators, not to mention indulging in the May-December romantic fantasy of the plot point which has Harmony eagerly bedding Jackie after calling him “cute” on a date and happily admitting to having “daddy issues.” (It’s yet another credit to Mann’s talent that she manages to make this somewhat less cringe-inducing than it otherwise would have been.)

The filmmakers especially dislike social media, identified here as the main coarsening agent of today’s youth. Jackie lands in the slammer in the first place for knocking out the male half of a couple who heckles Jackie at the “Nostalgia Night” show while filming the footage for their web show. This footage instantly goes viral – the writers seem to believe viral videos consist solely of profanity laden violence or scatological dance remixes – and when he emerges from prison, Jackie finds that the viral video has miraculously made him pop-culturally relevant again.

Jackie attempts to cash in on his renewed popularity by pitching a show idea to a Viceland-type cable network; he storms out of the meeting in a huff when the young TV execs are less than enthusiastic about his idea (which, in fact, is not really that good). Clearly, though, we’re meant to be on Jackie’s side as he sticks it to these superficial, know-nothing whippersnappers.

However, despite that dramatic show of a principled stand against pop-culture mediocrity, Jackie later agrees to host a “Fear Factor” type reality program on that same network. (That very dated reference betrays, once again, how terribly out of touch the filmmakers are about what’s actually happening in the popular media landscape.) Jackie’s conscience eventually doesn’t allow him to continue, and he quits during the taping, in an expletive-filled tirade that results in yet another viral video.

In the end, this film’s central, and fatal, weakness is in the conception of Jackie Burke’s character itself. De Niro tries his best to breathe some life into his thinly-drawn character; his familiar tics and mannerisms, as always bringing to mind much greater roles in much greater movies, lend a genial familiarity that is amusing at first, but soon wears off as the film slogs along and its faults become ever more apparent.

We’re told constantly throughout the film that Jackie is really, really funny; however, there’s precious little empirical evidence of this, based on what we see of him in action. Jackie’s comic style combines the equal-opportunity offensiveness of Don Rickles with the foul mouth of Andrew Dice Clay. (Jeff Ross and Jim Norton, two comedians who certainly aren’t afraid of offending folks, were respectively a co-screenwriter and consultant on this film.) There’s no real wit or subversive quality to Jackie’s routines; they simply come across as nasty and mean-spirited.

Therefore, the character of Jackie Burke, as much as he strives for enduring cultural currency, lacks the desperation and danger De Niro brought to far greater roles such as Jake La Motta in Raging Bull, or more pertinently for the film’s milieu, Rupert Pupkin in The King of Comedy, a film that still retains a freshness and edge that eludes The Comedian.

This is why the excessive subplots, as well as the cavalcade of stars assembled – including Danny DeVito, Edie Falco, Harvey Keitel, Patti LuPone, Charles Grodin, and Billy Crystal, among many others in roles and self-cameos – do little to disguise its conceptual flimsiness, or the ultimate waste of the considerable talent put to work on this disappointing trifle.

The Comedian is now playing in U.S. theaters.